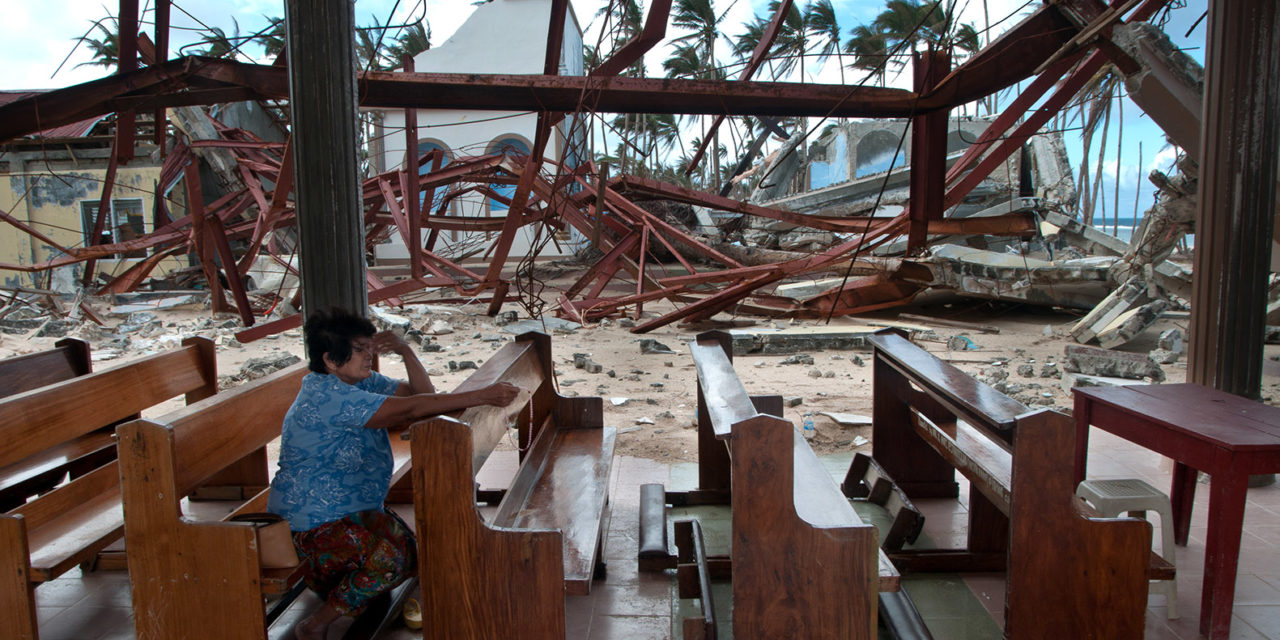 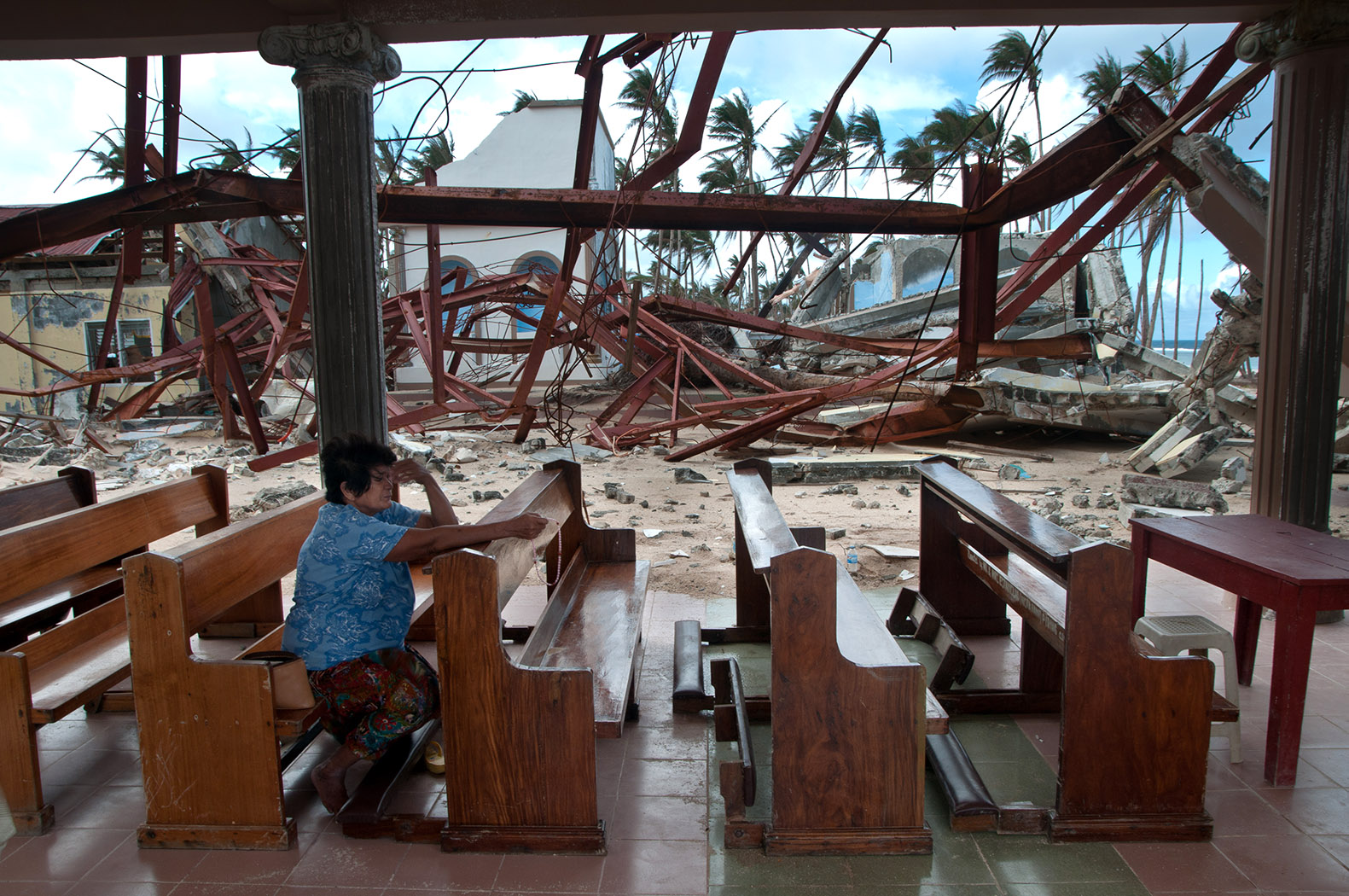 A Yolanda survivor prays at the damaged Our Lady of the Most Holy Rosary Parish Church in Matarinao, Salcedo, Eastern Samar, Nov. 29, 2013. ROY LAGARDE

“Therefore, you must also be vigilant, for you do not know the day nor the hour.” Mt 25:13

“Have you ever seen the coconut trees
blown down, cut and twisted
in all possible directions?
Have you ever seen a child
who was killed by a falling tree,
homes that were blown away,
lives and land in disarray?
That is what was left
of what now seems another planet…”

It will be six years after the strongest, biggest and most devastating super typhoon of our time, Haiyan or, locally known as Yolanda, hit our shores on a date etched in many people’s collective memory—November 8, 2013. Recent category 5 Hurricane Dorian and super typhoon Hagibis only refreshed old psychic wounds among Yolanda victims.

I can still vividly recall where I was when she violently imposed an unwelcome visit on us. In my room at the second story of the rectory of The Assumption of Our Lady Parish, Brgy Lalawigan, Borongan, Eastern Samar I was trying with all my might to pray my own shorter and personal version of the Oratio Imperata. I could hear the rains falling like spears from all directions. But the winds were unbelievable. They sounded to me like a combined rampage of the MRT and LRT wagons in full speed and whenever they struck the rectory, they sounded like trains crashing against us. Thankfully, the rectory was built on a strong foundation despite shaking repeatedly to the continuous “sustained winds of 295 kph and gusts as strong as 360 kph” (as per CNN, November 8, 2013), it refused to crumble. But my window jalousies totally surrendered, a few of them sporadically flying across the room or crashing down the floor. I found myself totally drenched and frantically covering my books and documents on my study table and bed with plastic tablecloths. I was horrified but refused to panic. There were other people who sought refuge at the rectory with me, poor families who could not be accommodated in the schools or concrete houses that served as unofficial evacuation centers. They were as drenched and as horrified as I was but also as determined to survive. We saw it as a sign of God’s mercy that the super strong winds which seemed relentless from 2 AM onward finally died down before 8 AM. But with the departure of Haiyan aka Yolanda winds, away also went much of our sense of security, confidence in the days ahead, crops in cultivated areas, and especially many homes of poor hapless parishioners that were flattened completely or blown away. Trees were blown down, cut in halves or twisted in all possible directions. And when I went out of the rectory to survey the aftermath I hardly recognized the parish. It felt like I stepped into another time and place. We looked like we were hit by a Hiroshima-type nuclear bomb. And I had to ask myself why the sea was now closer to the shore, only to realize the waters had invaded the land through the storm surges. I had to convince myself, and I found it extremely hard, that I was not in another planet.

With no wifi and electricity, we had no means of communicating with loved ones outside the province or the country. But we were alive, and every day was a challenge to survive. Food and fuel were getting scarcer by the minute. Still, we organized our own initial relief operations, victims helping victims with extra clothing, rice and canned goods. While at this we were disturbed by rumors that a local politician had declared Eastern Samar virtually wiped out of the map. It was as if the massive and unprecedented horrendous amount of destruction before our very eyes was not enough; we also had to be destroyed by fake news, by outright lies being sold as credible assessments, educated judgments or reliable information.

Trauma still characterizes our communal remembrance rituals. In fact, whenever I ask people where they were and what they were going through during Yolanda’s onslaught, a few would request to talk about another topic. Their experience of trauma is such that even a simple remembrance becomes somewhat like a Hebrew anamnesis—they feel a past horror becoming a present event all over again.

But that is exactly the point: Yolanda was not only a direct scion of global warming; she was and still is a global warning. If we keep on ignoring the cries of Mother Earth, our “common home”, and those of our poor who are the first at the receiving end of the aftermath of Mother Nature’s wrath, we know what we will reap.

November 1 and 2 take us to the transience of everything earthly. So did Yolanda. A tricycle driver spoke to me as we stood watching his ruined house, unknowingly relaying a simple insight shared by most Yolanda victims: “Yolanda made me realize everything we are and those we had to build for years are all passing. They can be taken in a wink if an eye.” A twelve-year-old girl named Precious asked: “My best friend who was with me at the evacuation center died. Why did I survive? Is there a good God who could do something like this to us?” I remember one of my sisters spending a long hour trying to console her. I wanted to tell her: “Precious, God is not the author of anything evil. Our sins are, especially our sins against Mother Nature and the poor.” But she was among the poor. I decided against saying any word at all to her; I felt I had no right to.

On the other hand, November 1 and 2 encourage us to bond with those who now enjoy eternity, asking for the intercession of the saints who are in perpetual enjoyment of God’s presence, and praying for those who are as yet preparing for heaven in the chambers of Purgatory that they may achieve full union with God and the saints.

But so did Yolanda bring many of our people to the gates of heaven or perhaps the latter chambers. And yet, looking around where Yolanda passed unceremoniously, one can easily sense a forgetfulness, even a conspiracy to not remember in an effort to avoid reliving a profound trauma.

In a real war there is, as many pundits put it, no substitute to victory. In our continuing experience of climate change realities, there can be nothing better than preparedness. Ironically, Yolanda and the Gospels chime on this same theme.

Luke the evangelist has Jesus warning his disciples in a way our weather and climate experts can relate very intimately. “Be attentive to yourselves lest your hearts may be weighed down by self-indulgence and inebriation and the cares of this life. And then that day may overwhelm you suddenly” (Lk 21:34).

Let me say it differently: “Si non vis Yolandam, para Yolandam (If you do not want a Yolanda, prepare for a Yolanda)!” 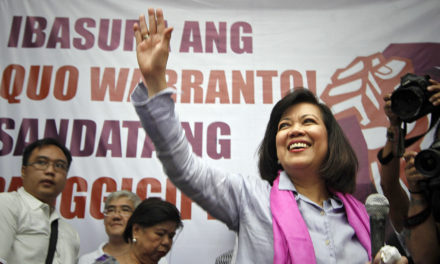 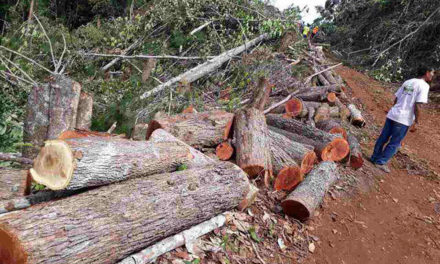 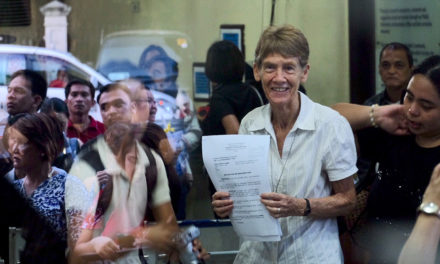 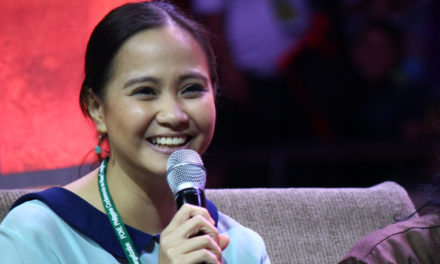