We write this pastoral letter to you with an eye to our celebration of the 500th year of the coming of Christianity to our shores. By 2021 the Christian faith shall have arrived in our shores for half a millennium already. For a long time we have been the only Asian country with a Christian majority. And even today we can thankfully say that we are the Asian country with the biggest Christian population. As we prepare for this great milestone in our history, it is but right that we examine how deeply we have lived up to our Christian name.

During the 33rd International Eucharistic Congress held in Manila in 1937, our faith was described in the official hymn of the Congress in this way:

The faith of the Philippines
Is like the blazing sun,
Is strong as a rock,
Immense like the sea.
Iniquity cannot lord
It over these islands.

More recently, we your bishops discerned that the top pastoral priority for the Church in the Philippines is integral faith formation. (cf. “Behold I Make All Things New”, 2001). While acknowledging that the faith of our people is simple and strong, we nevertheless lamented the ignorance of our people regarding the truths of our faith, and the lack of coherence between the faith we profess and our personal and societal lives. (cf. Live Christ, Share Christ, 2012). We also expressed our considered opinion that the way politics as it was presently practiced in our country is perhaps the single greatest obstacle to our integral development as a nation. (cf. Pastoral Exhortation on Philippine Politics, 1997) But the corruption of our politics cannot be isolated from corruption in our economic life, in our culture, and in the practice of our religion itself.

The bitter fruit of all these is widespread poverty, violence and a cultural degeneration whose end result is the absence of genuine peace.

No wonder people have been longing and clamoring for change. We are today indeed experiencing change, but it is highly questionable whether this change is for the better or for the worse.

We write to you not to endorse or disapprove moves to amend the 1987 Constitution but to offer pastoral guidance on whatever decision that may be taken on this matter.

Our Lord Jesus Christ called his followers the “salt of the earth and the light of the world.” (Mt. 5:13-14). He made it clear that his disciples should not abandon the world to its own devices. While they did not belong to the world, and should not conform themselves to this age (Roman 12:2), the followers of Christ were being sent into the world to penetrate it with the values of the Gospel, so that the Kingdom of God might come to the world and transform it. The Second Plenary Council of the Philippines (1991) set as one of the purposes of the new evangelization the transformation of society in which all Catholics are called to be involved. Every Christian is commissioned by the Lord Jesus not only to profess the Christian faith but to make it bear on our world which needs sorely the light of Christ. Every Catholic and all of us together, are called to bear witness to Christ by our lives, our words and by our actions which reflect and convey the love and mercy of Christ, the face of the Father’s mercy. The Second Vatican Council has gone to the extent of warning: “The Christian who neglects his temporal duties neglects his duties towards his neighbor and even God and jeopardizes his eternal salvation” (Pastoral Constitution on the Church in the Modern World, no. 43).

Hence we call on you, to participate in the political processes of our country, and today, especially in the process of amending our 1987 Constitution. The process of amending the Constitution should not be left to politicians or to those who either by election or appointment will be tasked to draft the amendments. For the Constitution is not only a piece of paper, even though some who would disregard its provisions may claim that it is only that. The Constitution is the single most important document of our country. The Filipino people are the author of this document. Those who are tasked to draft it or to amend it are not its authors but the instruments of the sovereign Filipino people. It becomes the Constitution or a valid amendment only upon approval by the people.

But while the people’s approval of the Constitution or amendments thereof is our final act of owning it, we must be vigilant and watch over, and even suggest ideas and formulations that enter into the Constitution. We have to make sure that the resulting document embodies “our rights, our ideals, our aspirations, and our dreams” (Commissioner Jose Nolledo).

We want to tell you that the CBCP supported the ratification of the 1987 Constitution, while acknowledging its imperfections. The bishops collectively said then, “We have come to the conclusion that the provisions of the new draft Constitution are consistent with the teaching of the Gospel.” They added, “We believe that this new Constitution will provide firm basis for governance, a clear direction for national renewal and development, and a covenant towards peace.” (Ricardo J. Cardinal Vidal, CBCP President, A Covenant Towards Peace: A Pastoral Letter on the Ratification of the 1986 Constitution of the Philippines, November 21, 1986).

We urge you to get involved in the process of amending the Constitution so that all its provisions will be consistent with the Gospel, and the gains of the 1987 Constitution will be preserved and enhanced, instead of being removed.

We urge you in a very special way to be vigilant that our Constitution will continue to assert that “Sovereignty resides in the people and all government authority emanates from them” (Art. II, sec. 1). Let us continue to insist that “Public office is a public trust. All public officers must at all times be accountable to the people, serve them with utmost responsibility, integrity, loyalty, and efficiency, act with patriotism and justice, and lead modest lives” (Art. XI, sec. 1). Let us not allow any public official to act as if he is the master of the people, for a person is elected or appointed to public office to be a servant of the people.

Let us make sure that the Constitution continues to uphold this fundamental principle: “The State values the dignity of every human person and guarantees full respect for human rights” (Art. II, Sec. 11). Let us ensure that provisions of our Bill of Rights are preserved, especially Art. III, Sec. 1: “No person shall be deprived of life, liberty, or property without due process of law, nor shall any person be denied the equal protection of the laws.” Let us especially safeguard the 1987 Constitution’s declaration that “The State shall equally protect the life of the mother and the unborn from conception (Art. II, Sec. 12). And let us continue to maintain the safeguards against dictatorial martial rule that our present constitution contains (Art. VIII, Sec. 18).

The gains enshrined in Article XV, on The Family, as well as the State Policy which says, “The State recognizes the sanctity of family life and shall protect and strengthen the family as a basic autonomous social institution” (Art. II, Sec. 12) should be safeguarded by us, as also the provision which mandates that upon request of the parents or guardians, optional religious instruction to children in the public schools must be provided by teachers designated by the religious authorities of the religion to which the children or wards belong (Art. XIV, Sec. 3, no. 3). Likewise very important is the prohibition of the death penalty, which we advocate to be made absolute (Art. III, Sec. 19, no. 1).

We cannot cite here all the provisions that we should be vigilant about. There is the big issue of federalism which we must all study. The clamor by many for it stems from the dissatisfaction of many people with the lack of equitable distribution of benefits, power and financial resources in our present unitary system. Do we need to change from our present unitary system to a federal system of government? Or will it suffice to introduce amendments and laws which will make the present unitary system responsive to the needs of disadvantaged regions?

Keep in mind that the drafting of a Constitution and amendments to it should concern all of us. And our overriding concern should be that the provisions of the Constitution and all amendments to be incorporated should be consistent with the Gospel and promote the common good. Such concern is our right and duty as Filipinos as well as followers of Jesus Christ who wants for us all peace and life in abundance.

Let us not fail our country. Even more importantly, let us not fail our Lord Jesus Christ. We, your pastors, on our part commit ourselves to the huge task of helping our people know our Constitution and the faith issues connected with it.

Let us, by our active involvement in the political life of our country and in the work of amending our Constitution prepare a people who do honor by their personal and societal livings to the Lord and to our Christian faith, come 2021, the 500th year of the coming of the Christian faith and of the holy Mass to our shores. Let us above all remember that no change in our Constitution will help us if we do not have a change of heart, soul and behavior.

May Mary, the Mother of Jesus, intercede for her people who call themselves, “pueblo amante de Maria” (a people in love with Mary).

For the Catholic Bishops’ Conference of the Philippines, January 30, 2017

+SOCRATES B. VILLEGAS
Archbishop of Lingayen-Dagupan
President, Catholic Bishops’ Conference of the Philippines 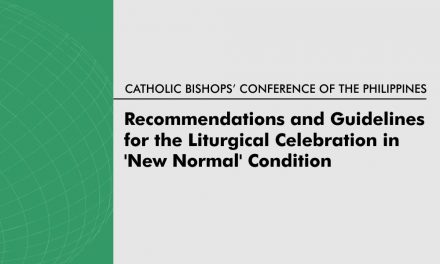 Recommendations and Guidelines for the Liturgical Celebration in ‘New Normal’ Condition 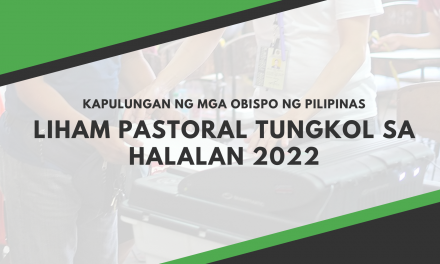 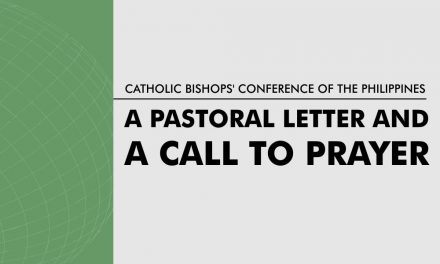