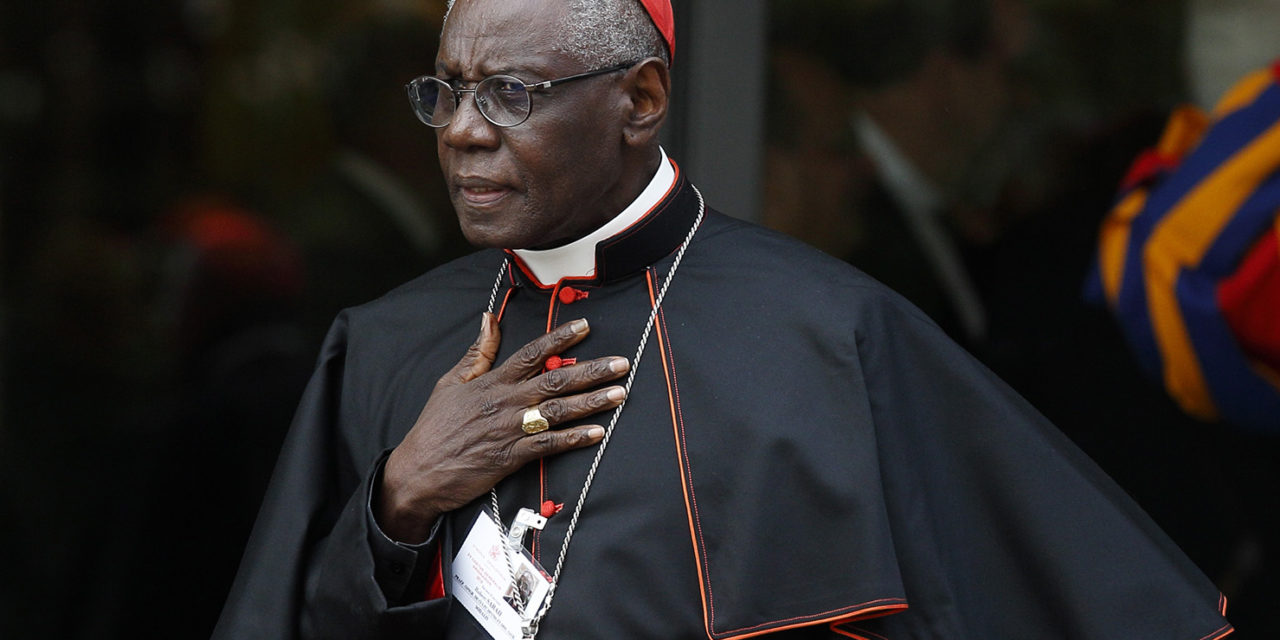 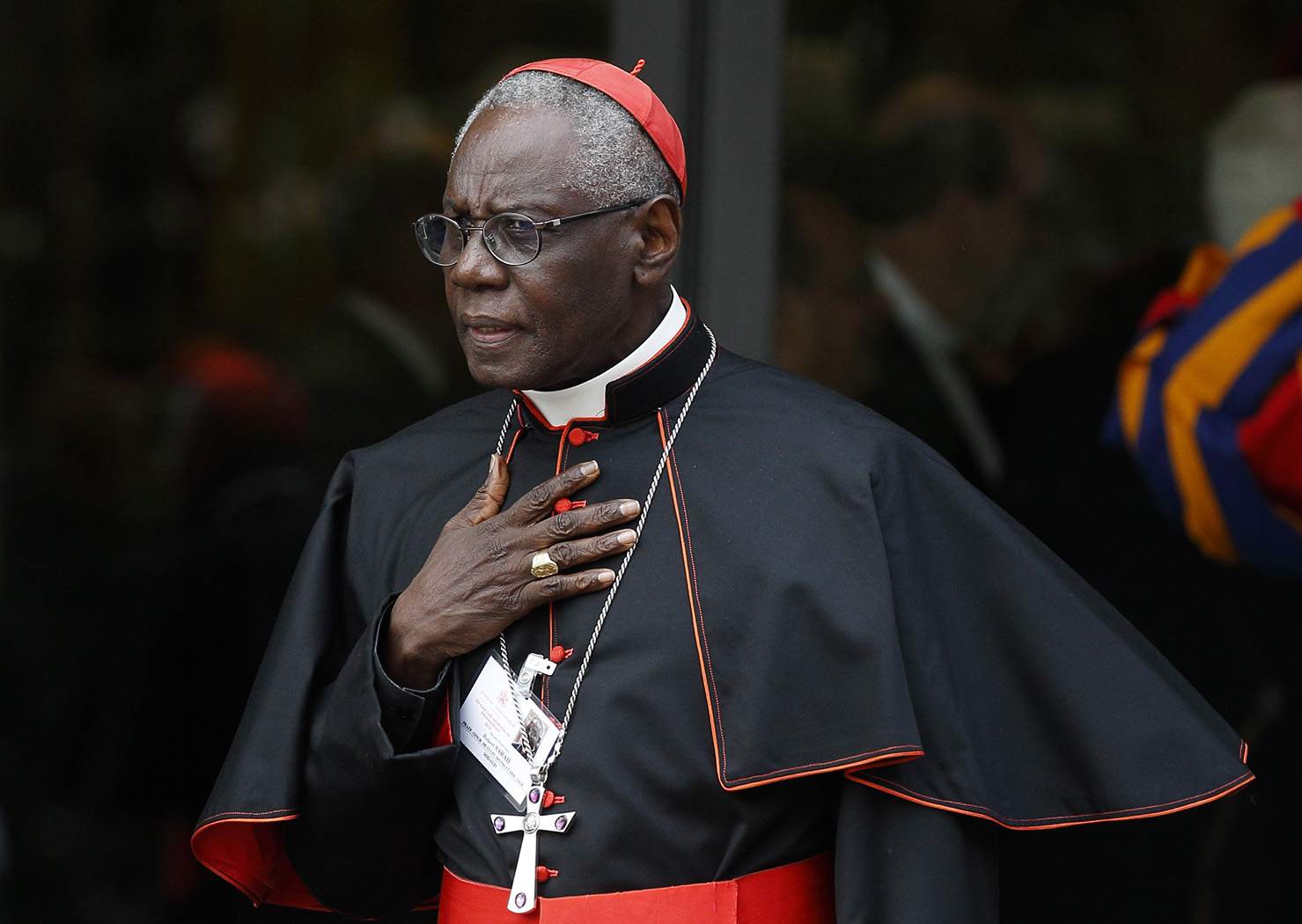 Cardinal Robert Sarah, prefect of the Congregation for Divine Worship and the Sacraments, leaves a session of the Synod of Bishops on young people, the faith and vocational discernment is pictured at the Vatican in this Oct. 5, 2018 file photo. PAUL HARING/CNS

VATICAN— Guinean Cardinal Robert Sarah, prefect of the Congregation for Divine Worship and the Sacraments, said the people who portray him as an opponent of Pope Francis are being used by the devil to help divide the church.

“The truth is that the church is represented on earth by the vicar of Christ, that is by the pope. And whoever is against the pope is, ipso facto, outside the church,” the cardinal said in an interview published Oct. 7 in Corriere della Sera, an Italian daily.

The 74-year-old cardinal, who Pope Francis appointed in 2014 as head of the office overseeing liturgical matters, often is portrayed as a critic of Pope Francis, especially because of the cardinal’s cautious attitude toward welcoming Muslim migrants to Europe, his concern about the church acting more like a social-service agency than a missionary church and his traditional approach to the liturgy.

The Corriere piece was published to coincide with the release of a new book-length interview with Cardinal Sarah, “The Day is Now Far Spent.” The English edition was released Sept. 22 by Ignatius Press in the United States.

The cardinal’s book dedication reads: “For Benedict XVI, peerless architect of the rebuilding of the church. For Francis, faithful and devoted son of St. Ignatius. For the priests throughout the world in thanksgiving on the occasion of my golden jubilee of priesthood,” which was July 20.

In the Corriere interview, the cardinal was asked what the “truth” was about his relationship with Pope Francis.

“The truth is that many people write not to give witness to the truth, but to place people against one another, to damage human relationships,” he said. “The truth doesn’t matter to them.”

“Those who place me in opposition to the Holy Father cannot present a single word of mine, a single phrase or a single attitude of mine to support their absurd — and I would say, diabolical — affirmations,” Cardinal Sarah said. “The devil divides, sets people against each other.”

Cardinal Sarah said it is normal for the church to experience difficulties and divisions, but every Christian is called “to seek unity in Christ.”

“I would add that every pope is right for his time,” the cardinal said. “Providence looks after us very well, you know.”

However, Cardinal Sarah’s new book is filled with warnings about how a lack of faith, trust in God and adherence to tradition is threatening the Catholic Church, particularly in Europe and the wealthy West. But he especially focuses on clerical sexual abuse and how that has meant “the mystery of betrayal oozes from the walls of the church.”

Still, in the chapter, “The Crisis of the Church,” the book includes the cardinal saying, “I would like to remind everyone about Jesus’ words to St. Peter, ‘You are Peter and on this rock I will build my church’ (Mt 16:18). We have the assurance that this saying of Jesus is realized in what we call the infallibility of the church. The spouse of Christ, headed by the successor of Peter, can live through crises and storms.”

Noting that some Catholics “are quick to hurl anathemas at those who do not follow their line of thought,” the cardinal said that it is time “to rediscover a bit of peace and benevolence. Only faith, confidence in the magisterium and its continuity down through the centuries can give us unity.”

Catholics today must ask themselves if they truly believe the faith the church always has taught, the faith of their ancestors, is still valid today, Cardinal Sarah told Corriere. “We are called to rediscover the truth of these (teachings) both with the incomparable analysis of Benedict’s thought and with great and sunny industriousness of Francis.”

Although the two popes have obvious differences, Cardinal Sarah said, “there is a great harmony and great continuity between them as everyone has been able to see these last few years.”

“The history of the church is beautiful,” he said, and reducing it to a political battle “typical of a television talk show is a marketing ploy, not a search for truth.” 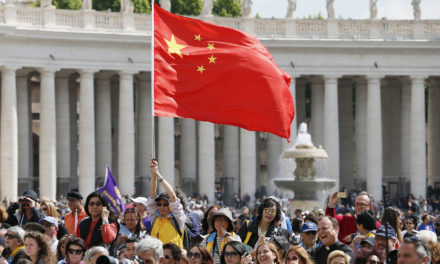 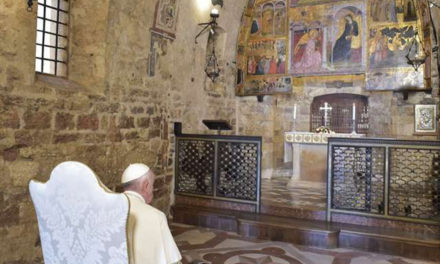 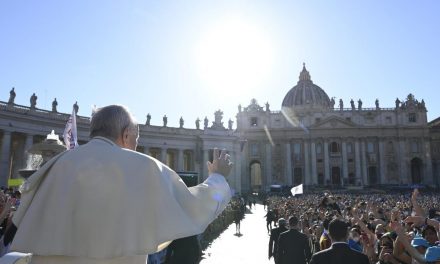 Pope Francis tells 80,000 teens to ask Our Lady for courage to do God’s will