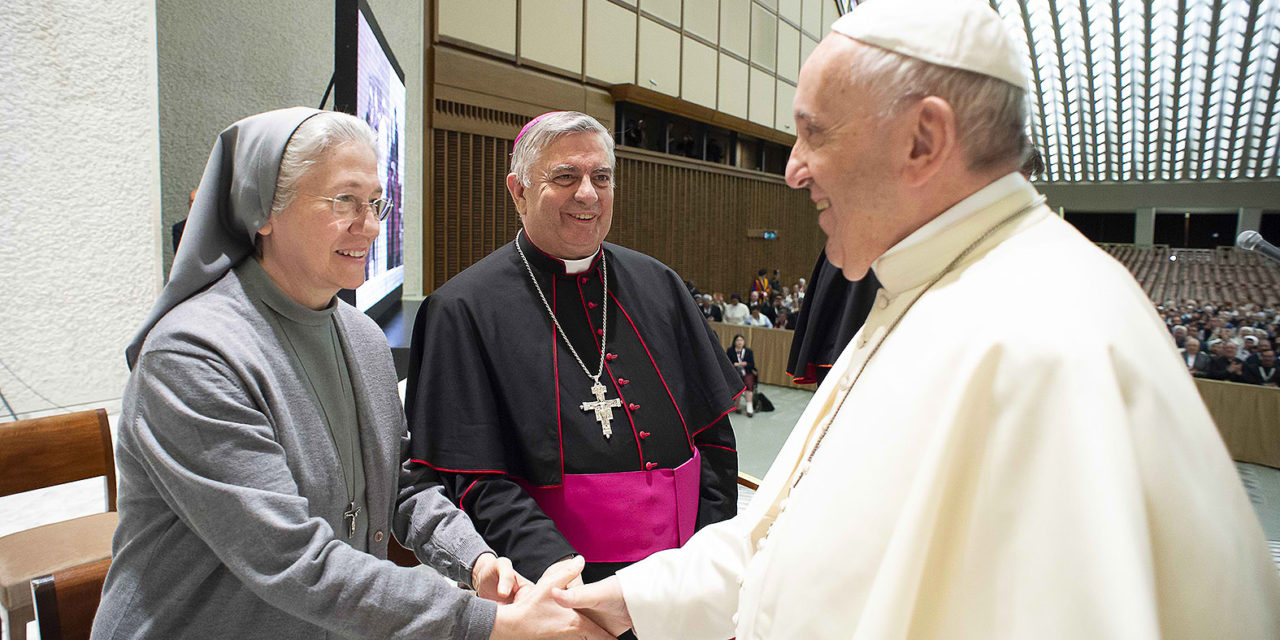 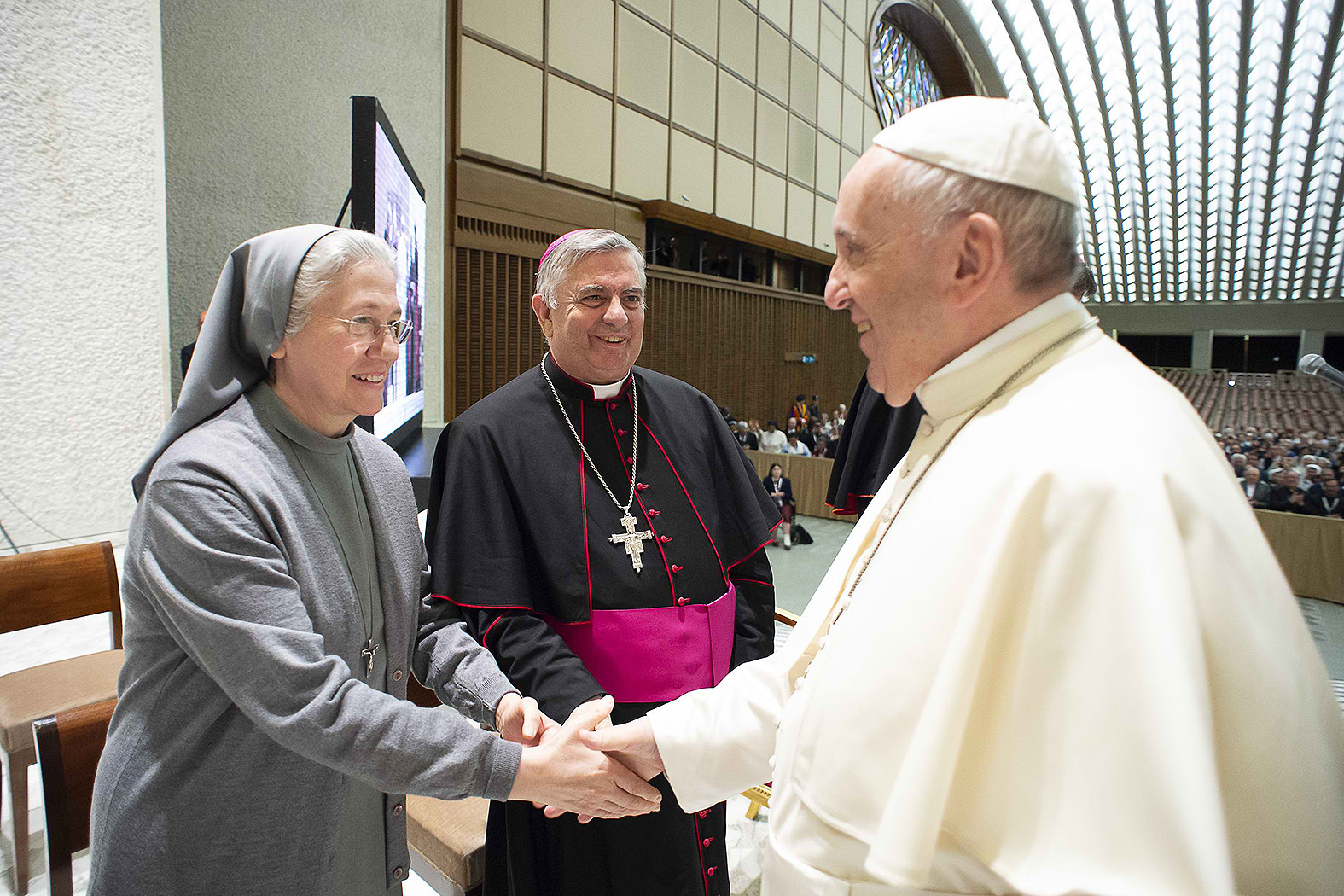 Pope Francis greets Sister Carmen Ros Nortes, a member of the Sisters of Our Lady of Consolation and under-secretary of the Congregation for Institutes of Consecrated Life and Societies of Apostolic Life, during an audience with about 700 consecrated men and women at the Vatican May 4. Looking on is Archbishop Jose Rodriguez Carballo, secretary of the congregation. The religious were attending an international congress sponsored by the congregation. VATICAN MEDIA/CNS

The only way to understand and choose what is right in a world full of conflict, difficulties and materialism, is by living a life of poverty that is filled with prayer and patience, Pope Francis said.

“If you pray, if you are poor, if you are patient, rest assured that you will be fruitful,” he told about 700 consecrated men and women in the Vatican’s Paul VI audience hall May 4.

The religious were attending an international congress sponsored by the Congregation for Institutes of Consecrated Life and Societies of Apostolic Life. The congress in Rome May 3-6 brought together members of many different forms of consecrated life, lay associations and movements to reflect on the meaning of “consecration” and issues related to consecrated life.

Joking with his audience, the pope said, “This Holy Spirit is a disaster! Because he never tires of being creative.” Yet, he added, look how interesting it is that this creator of diversity is also the creator of unity in which so many charisms all make up the one body of Christ.

In his off-the-cuff talk to participants, the pope said he was asked to come up with some “authentic criteria” for how to discern what is really happening in the world and how not to get lost in “the fog of worldliness,” temptations and “the spirit of war.”

Calling infighting within communities “a scandal,” he also warned his audience against the three “tiny steps” that will turn any consecrated religious into “a worldly religious”: money, vanity and pride.

If people are vigilant against being attached to material wealth, he said, then the other vices will not follow.

“What are the things the Spirit wants to stay strong in consecrated life?” he asked. “Prayer, poverty and patience,” he answered.

It is not good that some people seek to “get ahead” in religious life as if it were a career, he said. Prayer helps people rediscover that “I work for that Lord, not for my interests or for the institution I work at, no, for the Lord.”

“One cannot discern what is happening without talking with the Lord,” the pope said. But it also is impossible for a consecrated person to understand the world without a proper “spirit of poverty,” which is non-negotiable, he said.

It will be with this “spirit of poverty that the Lord defends us — he defends us! — from many problems and many things that try to destroy consecrated life,” the pope said.

Finally, he said, patience is needed.

So many conflicts within a community are caused by people not having the patience to put up with each other, he said. And then, so often the strongest end up winning, he said, and they are not always the best because they were the ones who were impatient.

Patience is shown in small ways, even breaking into a smile “when I want to start swearing,” he said, and it is shown in big ways, like sacrificing oneself, even one’s life.

Patience also is needed when vocations are diminishing and institutions must close, he said.

Congregations must avoid “the art of dying well,” which is “the spiritual euthanasia of a consecrated heart that can’t take it anymore, doesn’t have the courage to follow the Lord,” the pope said. The situation is seen when a congregation decides to stop accepting prospective members and starts selling what they have left to survive, he said.

“This is a sign, a sign that death is near, when a congregation begins to become attached to money,” he said. “It doesn’t have patience” to pray for new vocations and succumbs to a lack of spiritual poverty.

Religious must have the same patience God asked of Abraham, who yearned for offspring, but had to wait until he was 100 years old, Pope Francis said. “‘Patience,’ the Lord said. Hope. Keep going” without bitterness. 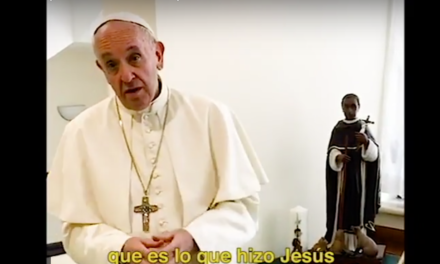 Pope urges Peruvians to focus on hope, unity ahead of trip 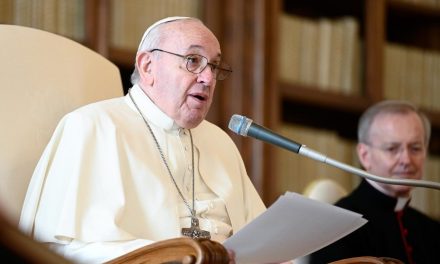 Pope Francis encourages young economists to learn from the poor