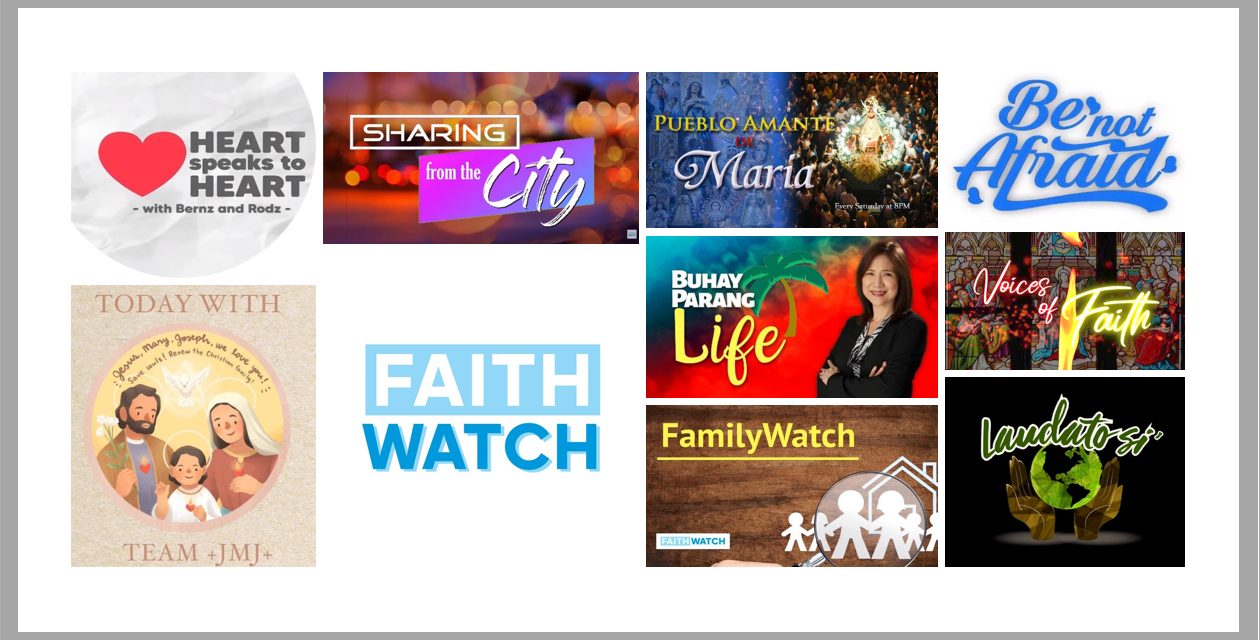 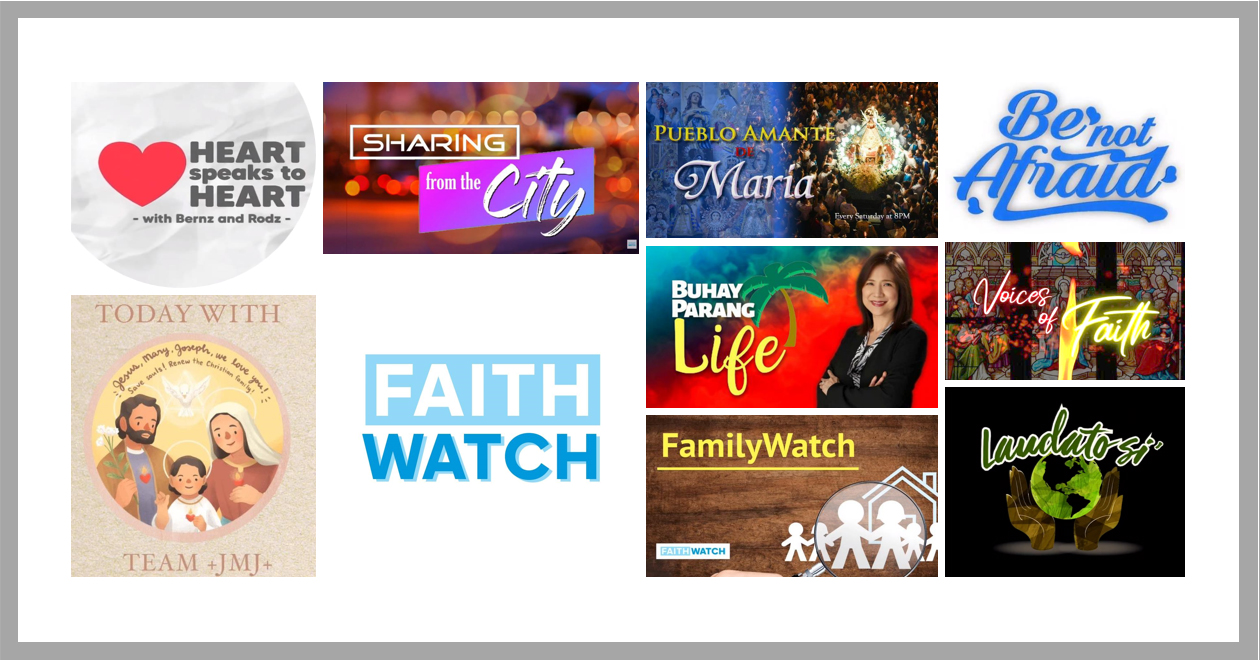 Faith Watch, the YouTube Channel of Areopagus Communications in collaboration with the CBCP Media Office, launched new shows to coincide with the celebration of the 500th year of Christianity in the Philippines.

Msgr. Pedro Quitorio of the CBCP Media Office said the introduction of the talk shows is one way of ‘accompanying the work of the new evangelization’.

He said they utilized the online platform to further help spread the Good News and activities of the Church, especially in this Year of “Missio ad Gentes”.

The priest said that “cursory observation” around the parishes reveal that the majority of Catholics are not reached by the parish structures or programs.

“Millions of the youth and poor are in the peripheries,” according to him.

During the 2nd Plenary Council of the Philippines it was observed that only a measly 20% of Catholics are reached by the parish.

“We’ve been working on this [online ministry] since 2006. And because of the pandemic, everybody became suddenly aware how the Internet can be put to good use in the ministry,” Quitorio said.

“I think we can reach the ‘ad gentes’ through this medium,” he said.

Quitorio also said that the Church needs to be more aggressive in helping shape public opinion with “the light of the Gospel, that is why more people out there need to be reached” by all available media of communication.

The series of new shows, mostly hosted by laymen, have began airing since November last year. Some shows are hosted by priests and even movie celebrities.

The new shows are as follows:

Buhay Parang Life a prolife show that focuses life issues and other topics in this thing called “life”. It also touches on life and the family, reproductive health of women, counselling people who have undergone an abortion. Hosted by Ms. Rita Linda Dayrit, president of Pro Life Philippines and Certified Image and Etiquette Consultant.

Family Watch features conversations on marriage, parenting, and Catholic family life. Each episode carries the message that the renewal of society and transformation of the Church begins in and through the family by strengthening marriages, empowering parents, and bringing families closer to Christ. Hosted by Manjoe Mendoza, father of nine children, parent education advocate from Educhild Foundation. He and his wife are Pre-Cana facilitators and have been representing Educhild in the CBCP-ECFL for six years. Alternate co-hosts are Lennon Ramirez, Theology of the Body instructor and youth formation advocate, and Gil Gonzales of Educhild Gabay Pamilya, and a father of seven.

Hosted by Carlos Antonio Palad President of Filipinos for Life and long-time Associate of Defensores Fidei Foundation, Voices of Faith presents the voices of Catholics who seek to promote the wisdom and beauty of Catholicism, and to defend it from misunderstandings, harmful ideas and heresies. Though the show is a Catholic apologetics show, broader range of topics (e.g. including the way of liturgical beauty and the sense of the sacred, cultural apologetics, defending fundamental values, ensuring the transmission of the faith to the next generation) are also discussed by Catholic theologians and experts.

Heart Speaks to Heart presents the stories, journeys, and struggles of Catholic converts and reverts, separated from the Church due to numerous misconceptions and prejudices about it, but by the grace of God, found their way back Home. Through their conversion and reversion stories, we can see the beauty and fullness of truth that is found in the Catholic Church. Inspired by one of the most well-known converts to Catholicism, St. John Henry Newman, the show is hosted by Bernz Caasi of the podcast ‘Unboxing Catholicism’. He was once an anti-Catholic Protestant who once considered becoming a pastor. His co-host is Rodz De Leon a Catholic revert, educator, occasional speaker and host, and Rosary promoter. He co-founded a newly-formed Marian apostolate, “Champions of the Rosary – Philippines”.

SHARING FROM THE CITY

“Sharing from the City” is the reboot of the famous 80s TV show, Sharing in the City of the late Fr. Sonny Ramirez, OP.

Hosted by another Dominican friar, Fr. Virgilio Ojoy, OP, and TV and movie personality Ms. Candy Pangilinan, the show is all about “sharing good vibes, sharing Good News”, to spread the Good News to make the viewers and listeners better Christians. Witty, entertaining, powerful, funny and deeply moving, the show offers a fresh, new way of opening our eyes and hearts to the realities of life.

Today with Team JMJ helps families journey towards holiness with “+JMJ+” i.e. Jesus, Mary, and Joseph as their guide. Includes marriage and intentional parenting tips, saint stories for kids, and practical tips for “enriching” one’s life. Hosted by Anthony and Tina Rodriguez, founders of Intentional Parenting Philippines, and servants of the Light of Jesus Family accompanied by their kids Timothy, Therese, Anne, and Titus.

Pueblo Amante de Maria is the Mariology show of Faith Watch. The show will tackle the Marian devotion of Filipinos and will feature the various Marian shrines in the country as well. It will also present faith stories and favors received through the intercession of the Mother of God. Hosted by priests from the Diocese of Antipolo – Fr. Reynante Tolentino, parish administrator and rector of the National Shrine of Our Lady of Peace and Good Voyage (Antipolo Cathedral) and Fr. John Paul Buenafe, parochial vicar of Antipolo Cathedral.

Inspired by the encyclical of Pope Francis, Laudato Si: Caring for Our Common Home, the show aims to promote the teachings of the document and challenges people to “care for our common home. It also provides practical doable solutions and advocacies for ordinary citizens to the various ecological and environmental issues of the present times.

Hosted by Sis Lou Arsenio, program coordinator of the Archdiocese of Manila’s Ministry of Ecology with Rodne Galicha, lead convenor of the Living Laudato Si movement in the Philippines and co-founder of Climate Action for Sustainability Initiative (KASALI).

While Faith Watch is spread across social media platforms, it is will be launching sometime Easter an app that intends to help enhance accessibility and engagement of Catholic content among Filipinos here and abroad. 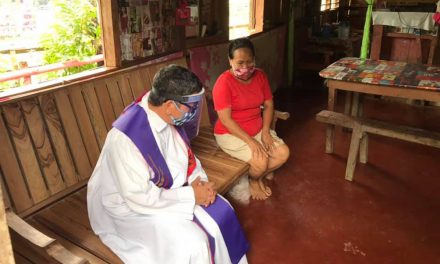 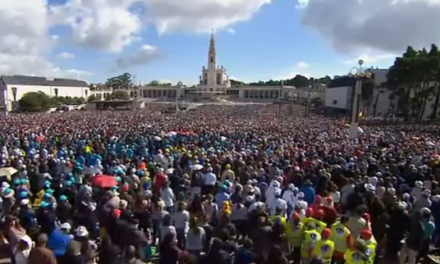 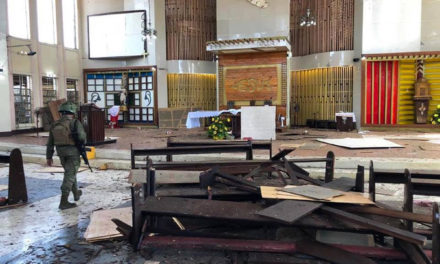