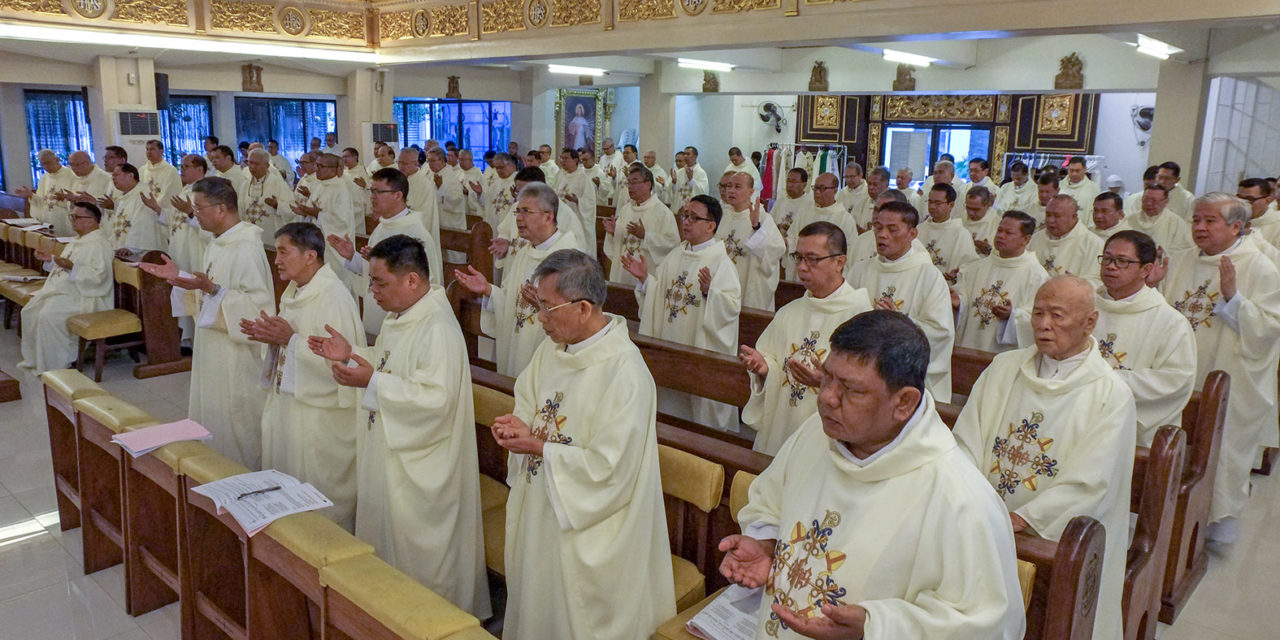 Pastoral Message on the Natural Calamities Happening in the Country

Dear brothers and sisters in Christ:

This is not the first time the scenic Taal volcano erupts. It will most certainly not be the last. And throughout its fiery and violent history, it has always taken a toll on human lives and on human well-being.

But coming in the heels of other natural disasters like the destructive typhoons that hit the country, the devastating floods that left many of our countrymen homeless and prostrate, earthquakes that have wrecked buildings, lives and the basic sense of security without which we cannot live in tranquility, sicknesses and infections never heard before threatening us — our people ask themselves what they might have done to deserve chastisement from God. And not only us, the plants and trees and animals suffer and moan too but unlike us, unable to speak.

It has always been the witness of the Scriptures that God’s mercy overlooks our sins and that he does not deal with us as our failings deserve.“If you, Oh Lord, marked iniquities, Lord, who would endure?” (Ps 130:3)

We miss our steps and fall. A bus that loses traction on a mountain track plunges into a ravine. What is at work is not God’s wrath but the law of gravity– the very same law that keeps our feet, our homes and the objects with which we deal firmly rooted on the ground, the same gravity that makes life easier to live on earth.

Typhoons are not the scourges of a vengeful God.

“While it is true that suffering has a meaning as punishment, when it is connected with a fault, it is not true that all suffering is a consequence of a fault and has the nature of a punishment. The figure of the just man Job is a special proof of this in the Old Testament. Revelation, which is the word of God himself, with complete frankness presents the problem of the suffering of an innocent man: suffering without guilt. (St. John Paul, Salvifici Doloris, 11)

The point is that our world – the very same world that nurtures and nourishes us – is made up of processes: the very processes by which the wonderful miracle of evolution has taken place and continues to take place.

If we are grateful for the earth and its resources, then we must be grateful for the very same processes that bring them about. Unfortunately, persons who live close to volcanoes, or who build their homes along waterways, or who live along the corridor of typhoons and hurricanes are the victims of destruction and the hapless sufferers, not because God punishes them. It is not because God hates them, but because that is just the nature of this imperfect world. It is a world where the activities of humankind and the processes of nature do not always coincide with each other.

One who takes to the seas in search of its resources must be prepared to face the risks of wave and wind. The very same sea that yields a trove of sea-life is also the very same sea that can serve as the watery grave of some. There is nothing about God’s anger or punishment or vengeance in all this.

This is just how our world is.

All Creation is Groaning in Labor Pains (Rom 8:29)

Earthquakes and typhoons and ash falls are signs that we are still living in an imperfect natural world. They are natural disasters.

Indeed it is not the unpredictable processes of the earth that militate against God’s existence and his goodness. It is rather the resolve that we will rise from where we fall, that we will extend helping hands to those who can no longer rise. It likewise involves putting our scientific acumen and our human intelligence into understanding volcanoes and earthquakes and typhoons and draughts and floods better so that we can plan our lives relying less on chance and more on human providence. It is all this that allow us to utter the Holy Name of God in the midst of earth’s birth pangs that await the dawning of God’s Eternal Day.

God accompanies us in the earthquakes and volcanic eruptions and floods and storms not as a Great Punisher but as the Great Loving Emmanuel, One to whom we can turn assured that He will never forsake the people who call on His name. These calamities can be opportunities for grace and blessings. We know that in everything God works for good with those who love him. (Rom 8:28).”

Many can go to Taal to view the spectacle. While there is nothing intrinsically wrong about observing an eruption, to do so without empathy for those who suffer is certainly not Christian. To be a spectator and to make of the misery of our brothers and sisters a mere object of curiosity is certainly to be like the priest and the Levite who passed by, even as the wounded man was bleeding to death by the roadside (cfr. Lk 29:30-37). Certainly he was not the victim of either, but the sin of these “holy men” consisted precisely in passing by without heeding the ethical demand that the situation made on them.

We laud the government for the effort it has taken to rescue our fellow Filipinos within the danger zone and to evacuate them to centers of refuge. But we must continue to ask that budgetary priorities be set aright so that the Department of Science and Technology, and in particular, the Philippine Institute of Volcanology, may be more adequately supported, so that observations and studies may be more helpful, and findings may be more precise. We commend the DOST and Phivolcs for their heroic services despite the limitations of funds and equipment.

Knowing that we are a disaster-prone country particularly because we lie in the Pacific Ring of Fire, as well as within the typhoon belt along the gateway to Southeast Asia, as well as the zone where the tectonic plates collide and push against each other with unimaginable force, disaster preparedness cannot be a peripheral concern. We appeal for the construction of permanent evacuation centers in the most vulnerable areas.

Certainly, preparing for disasters like stocking up on food supplies and necessities, upgrading relief and rescue equipment and the training of personnel, both civilian and military, deserve more than what is left over from unspecified intelligence funds!

Already, we have been witnesses to the enthusiasm with which other Filipinos have responded not only because of pity but because of Christian solidarity. We are happy that Christians and peoples of other faiths, and not only Catholics, have been among the first responders. It is the determination with which our wounded and impoverished countrymen pick up the pieces of their broken lives. In all these, we see the strength of God at work. It is the selflessness with which Filipinos and other people from all over the world have responded with empathy and genuine concern to the needs of those now suffering privation that allows us to acknowledge the goodness and the mercy of God.

We can also see these natural calamities as calls of God. These can be God’s way of purifying us and forging us as people. The God of Dialogue is speaking to us through and in all these. Do we hear him?

God is purifying us how to treat Mother Nature as our common home. Though not all calamities can be caused by human activities, like earthquakes and volcanic eruptions, some are proven by science as human-induced, like floods and droughts and typhoons. We should change our ways so as not to contribute to climate change which bring about ravages of nature. These calamities call for conversion. These calamities appeal for deeper compassion.

God is calling us to greater solidarity with one another. The unfortunate events call for greater generosity. We can control our wants so that we can respond more to the needs of others.

This is the time to strengthen our love, to increase our faith and embolden our hope. God is not the Great Punisher. He is the Lord who walks among His people in distress. God is love.

May Our Lady Comfort of the Afflicted embrace our suffering nation and lead us to her Son the Lord of all consolations. 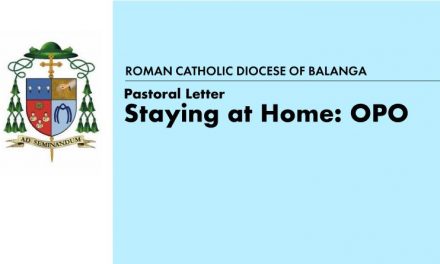 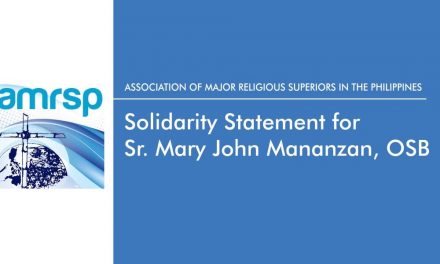 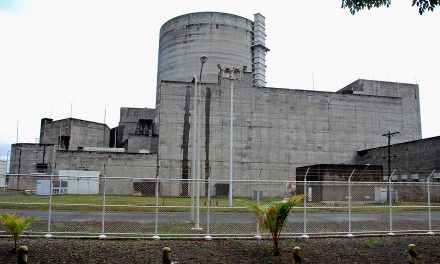 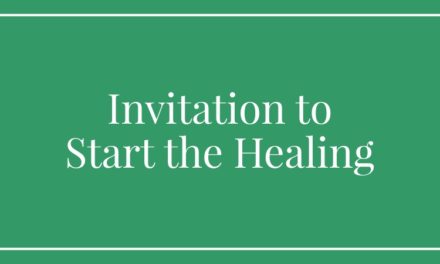 Invitation to Start the Healing