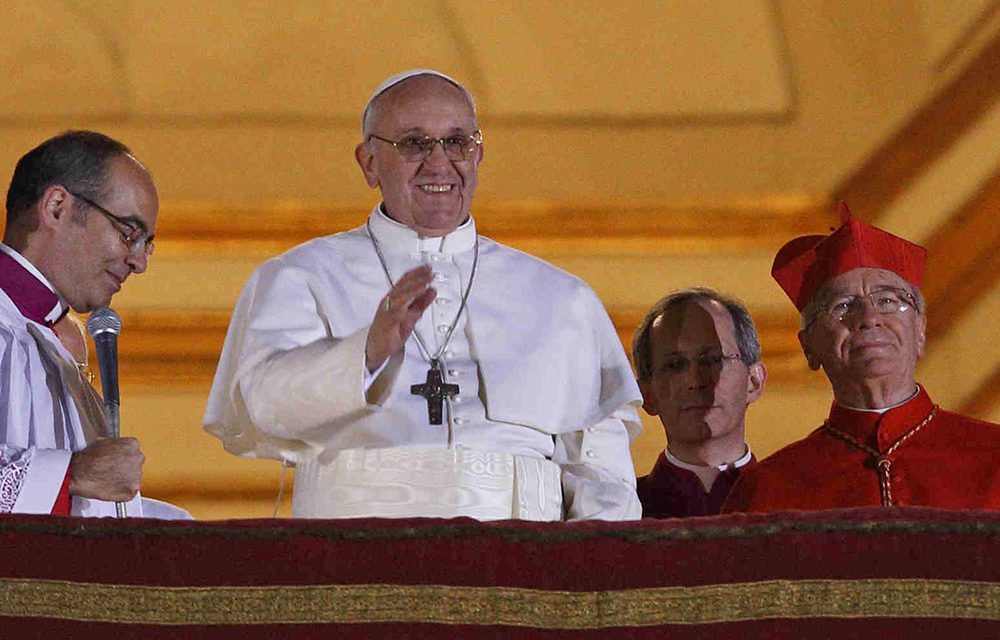 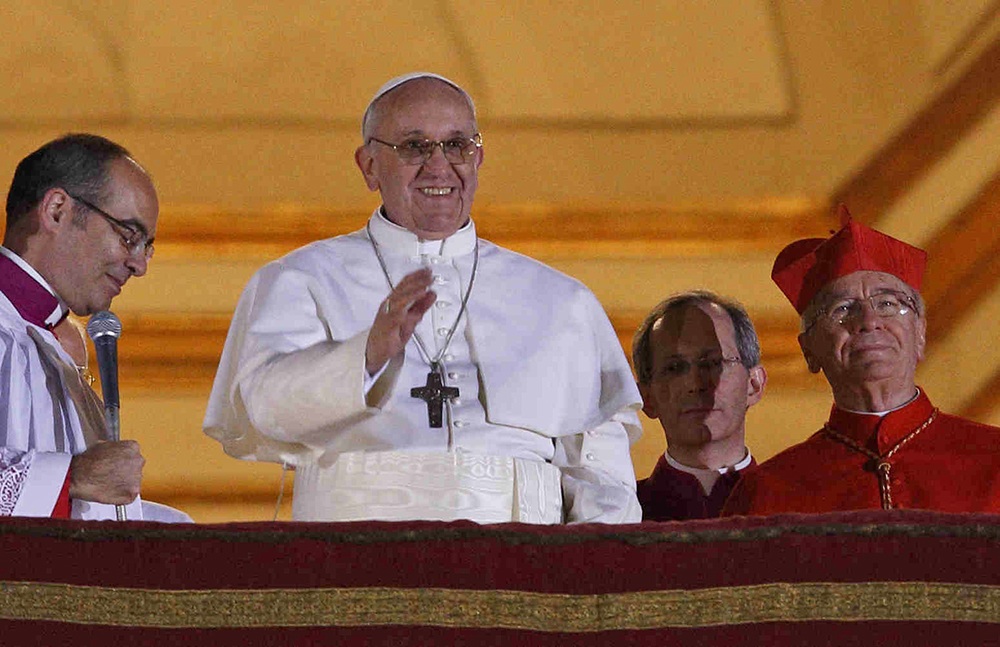 Pope Francis appears for the first time on the central balcony of St. Peter’s Basilica at the Vatican in this March 13, 2013, file photo. PAUL HARING/CNS

VATICAN— Cardinal Jorge Mario Bergoglio was elected pope just a few days after telling the College of Cardinals that the Catholic Church faced a clear choice between being a church that “goes out” or a church focused on its internal affairs.

After the cardinal from Buenos Aires, Argentina, was elected March 13, 2013, and chose the name Francis, he made “go out,” “periphery” and “throwaway culture” standard phrases in the papal vocabulary.

Catholics have a wide variety of opinions about how Pope Francis is exercising the papal ministry, and many of his comments — both in informal news conferences and in formal documents — have stirred controversy. But, as he wrote in “Evangelii Gaudium,” the apostolic exhortation laying out the vision for his pontificate: “I prefer a church which is bruised, hurting and dirty because it has been out on the streets, rather than a church which is unhealthy from being confined and from clinging to its own security.”

But there are two areas of internal church affairs that he recognized needed immediate attention: the reform of the Roman Curia and the full protection of children and vulnerable adults from clerical sexual abuse.

The organizational reform of the Curia has been taking place in stages, but Pope Francis has insisted that the real reform is a matter of changing hearts and embracing service.

On the issue of abuse, nine months into his pontificate, Pope Francis established the Pontifical Commission for Child Protection to advise him on better ways to prevent clerical sexual abuse and to ensure pastoral care for the survivors.

While Pope Francis has emphatically proclaimed “zero tolerance” for abusers and recently said covering up abuse “is itself an abuse,” as his fifth anniversary approached serious questions arose about how he handled accusations that Chilean Bishop Juan Barros, who was a priest at the time, covered up allegations of abuse against his mentor.

The new scandal threatened to undermine the widespread popularity of Pope Francis and his efforts to set the Catholic Church on a new course.

For Pope Francis, that new course involves evangelization first of all.

“Evangelizing presupposes a desire in the church to come out of herself,” he had told the cardinals just days before the conclave that elected him. “The church is called to come out of herself and to go to the peripheries, not only geographically, but also the existential peripheries: the mystery of sin, of pain, of injustice, of ignorance and indifference to religion, of intellectual currents and of all misery.”

Mercy is the first thing the Catholic Church is called to bring to those peripheries, he says.

Although in 2013 he told reporters he would not be traveling as much as his predecessors, Pope Francis has continued their practice of literally “going out,” making 22 trips outside of Italy and visiting 32 nations.

But he also regularly visits the peripheries of Rome, both its poor suburbs and its hospitals, rehabilitation centers, prisons and facilities for migrants and refugees.

His desire to reach out has inspired innovations that were noteworthy at the beginning of the papacy, but now seem to be a natural part of a pope’s day. For example, after beginning with Vatican gardeners and garbage collectors, the pope continues to invite a small group of Catholics to join him most weekday mornings for Mass in the chapel of his residence.

The residence, the Domus Sanctae Marthae, is a guesthouse built by St. John Paul II with the intention of providing decent housing for cardinals when they would enter a conclave to elect a new pope. Pope Francis decided after the 2013 conclave to stay there and not move into the more isolated papal apartments in the Apostolic Palace.

On Holy Thursday each year, he has celebrated Mass at a prison, care facility or refugee center and washed the feet of patients, inmates or immigrants, both men and women, Catholics and members of other faiths. He also ordered the Vatican Congregation for Divine Worship and the Sacraments to clarify that the feet of both women and men can be washed at the Holy Thursday Mass of the Lord’s Supper.

During the 2015-16 Year of Mercy, he made a visit one Friday a month to people in particular need, including those at a school for the blind, a neonatal intensive care unit, a community of recovering alcoholics, a children’s group home and a community for women rescued from traffickers who forced them into prostitution. Once the Year of Mercy ended, the pope continued the visits, although not always every month.

In September 2015 as waves of migrants and refugees were struggling and dying to reach Europe, Pope Francis asked every parish and religious community in Europe to consider offering hospitality to one family. The Vatican offered apartments and support to a family from Syria and a family from Eritrea. Then, seven months later, Pope Francis visited a refugee center on the island of Lesbos, Greece, and brought 12 refugees back to Rome on the plane with him.

Less than three months into his pontificate, he began denouncing the “throwaway culture” as one where money and power were the ultimate values and anything or anyone that did not advance money or power were disposable: “Human life, the person are no longer seen as primary values to be respected and protected, especially if they are poor or disabled, if they are not yet useful — like an unborn child — or are no longer useful — like an old person,” the pope said at a general audience.

In the first three years of his papacy, he published three major documents: “Evangelii Gaudium” (The Joy of the Gospel); “Laudato Si’, on Care for Our Common Home,” on the environment; and “‘Amoris Laetitia’ (The Joy of Love), on Love in the Family,” his reflections on the discussions of the Synod of Bishops in 2014 and 2015.

People skeptical about the scientific proof that human activity is contributing to climate change objected to parts of “Laudato Si’,” but the criticism was muted compared to reactions to Pope Francis’ document on the family, especially regarding ministry to divorced and civilly remarried Catholics and the possibility that, under some conditions, some of those Catholics could return to the sacraments.

The strongest criticism came from U.S. Cardinal Raymond L. Burke and three other cardinals, who sent to the pope and then publicly released in November 2016 a formal, critical set of questions, known as “dubia,” insisting that allowing those Catholics to receive the sacraments amounted to changing fundamental church teaching about marriage, sexuality and the nature of the sacraments.

Pope Francis has not responded to the cardinals, two of whom have since died. But in December, the Vatican posted on its website the guidelines for interpreting “Amoris Laetitia” developed by a group of Argentine bishops, as well as Pope Francis’ letter to them describing the guidelines as “authentic magisterium.”

The guidelines by bishops in the Buenos Aires region said the path of discernment proposed by Pope Francis for divorced and civilly remarried couples “does not necessarily end in the sacraments” but, in some situations, after a thorough process of discernment, the pope’s exhortation “opens the possibility” to reception of the sacraments.

In the document and throughout his pontificate, Pope Francis has emphasized God’s mercy and the power of the sacraments to spur conversion and nourish Christians as they try to progress in holiness.

Like all popes, Pope Francis frequently urges Catholics to go to confession, telling them it is not a “torture chamber.” And he repeatedly gives priests blunt advice about being welcoming and merciful to those who approach the confessional.

Like St. John Paul did each Lent, Pope Francis hears confessions in St. Peter’s Basilica. But, he surprised even his closest aides beginning in 2014 when, instead of going to the confessional to welcome the first penitent, he turned and went to confession himself.

He also has surprised people by being completely honest about his age. In April 2017, when he was still 80 years old, he told Italian young people that while they are preparing for the future, “at my age we are preparing to go.” The young people present objected loudly. “No?” the pope responded, “Who can guarantee life? No one.”

From the beginning of his papacy, Pope Francis has expressed love and admiration for retired Pope Benedict XVI. Returning from South Korea in 2014, he said Pope Benedict’s honest, “yet also humble and courageous” gesture of resigning cleared a path for later popes to do the same. 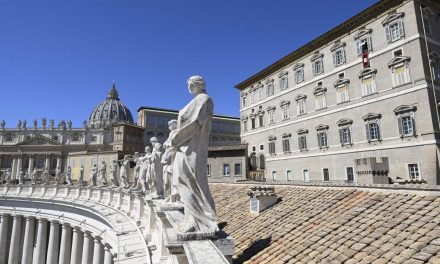 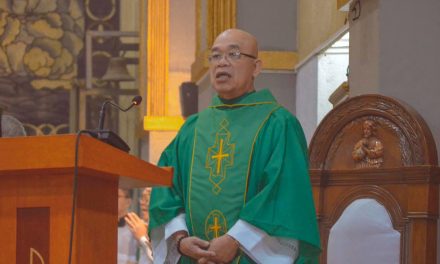 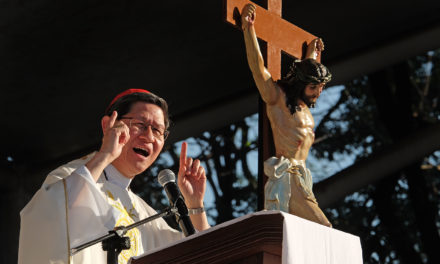 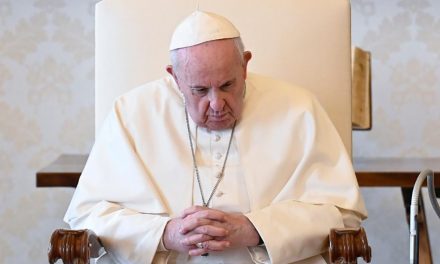