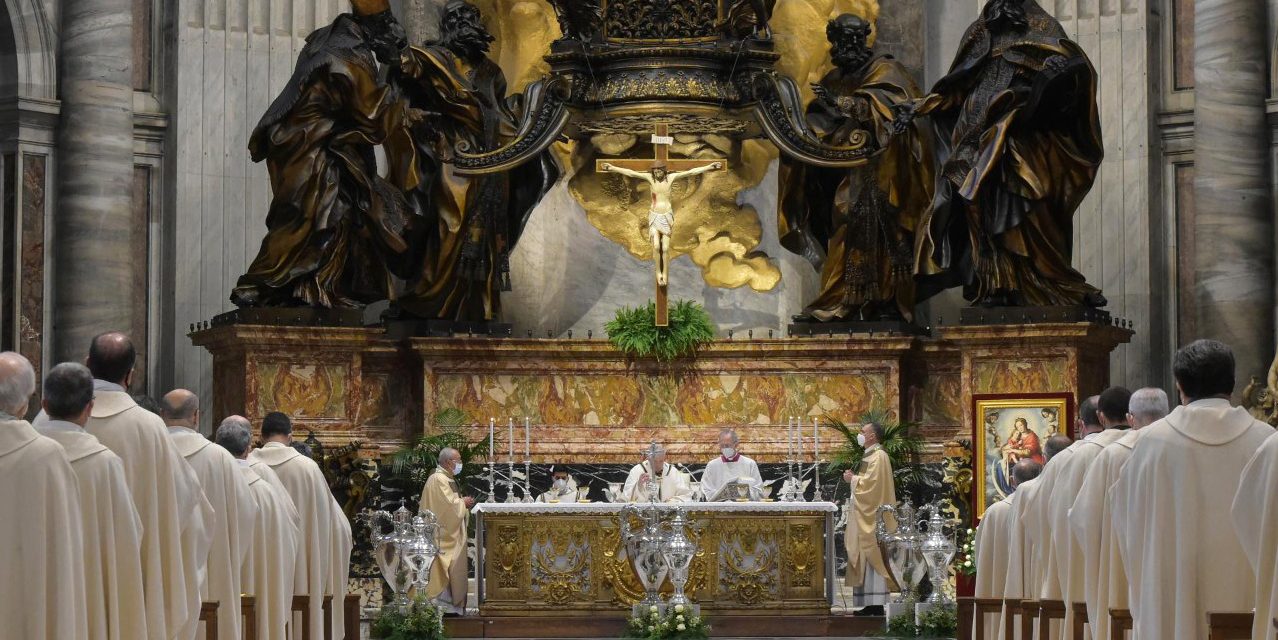 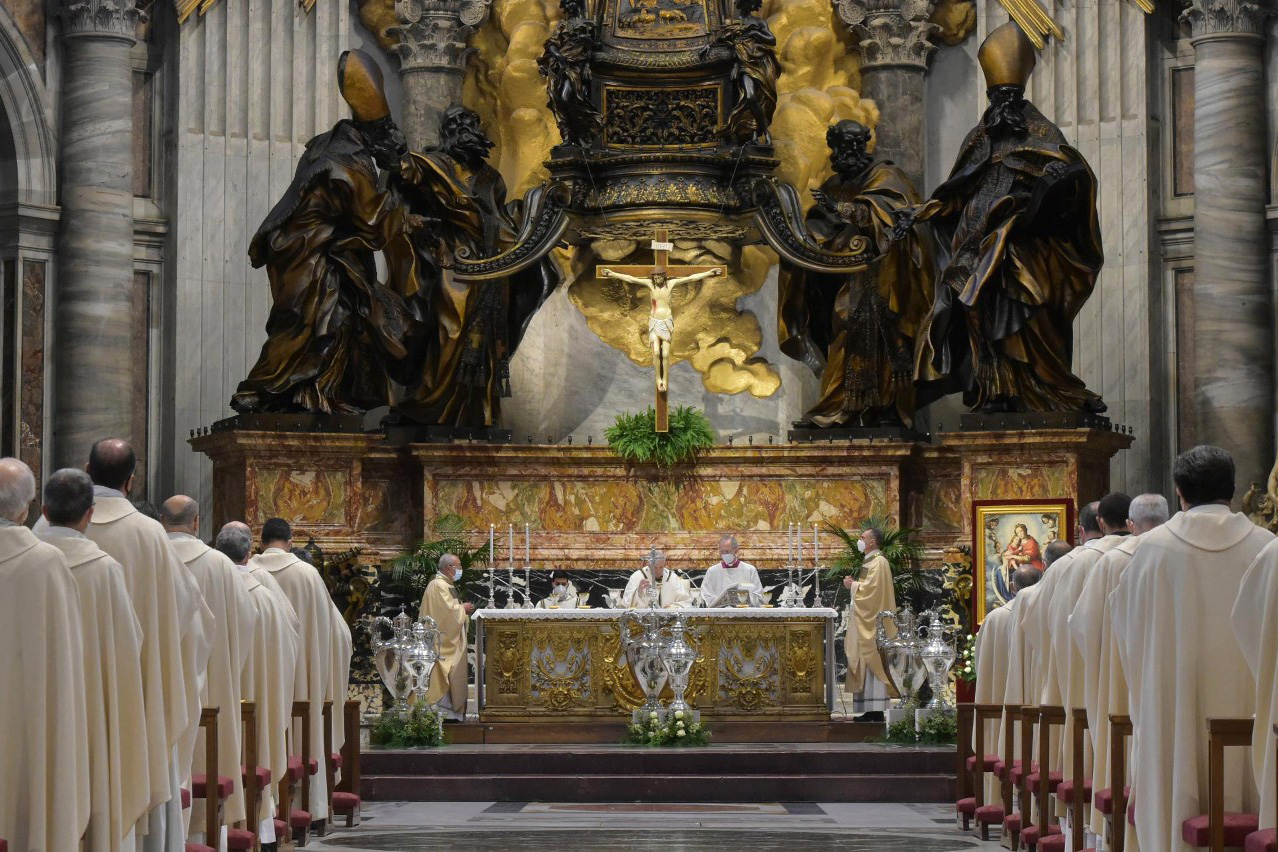 The Gospel shows us a change of heart among the people who were listening to the Lord. The change was dramatic, and it reveals the extent to which persecution and the cross are linked to the proclamation of the Gospel. The admiration aroused by the grace-filled words spoken by Jesus did not last long in the minds of the people of Nazareth. A comment that someone murmured went insidiously viral: “Is not this Joseph’s son?” (Lk 4:22).

It was one of those ambiguous expressions that are blurted out in passing. One person can use it approvingly to say: “How wonderful that someone of such humble origin speaks with this authority!” Someone else can use it to say in scorn: “And this one, where did he come from? Who does he think he is?” If we think about it, we can hear the same words spoken on the day of Pentecost, when the apostles, filled with the Holy Spirit, began to preach the Gospel. Some said: “Are not all these who are speaking Galileans?” (Acts 2:7). While some received the word, others merely thought that the apostles were drunk.

Strictly speaking, those words spoken in Nazareth might go either way, but if we look at what followed, it is clear that they contained a seed of violence that would then be unleashed against Jesus.

They were “words of justification”, as for example, when someone says: “That is altogether too much!” and then either attacks the other person or walks away.

This time, the Lord, who at times said nothing or simply walked away, did not let the comment pass. Instead, he laid bare the malevolence concealed in the guise of simple village gossip. “You will quote me the proverb: ‘Physician, heal yourself’. What we have heard that you did in Capernaum, do here also in your own country!” (Lk 4:23). “Heal yourself…”

As always, the Lord refuses to dialogue with the evil spirit; he only replies in the words of Scripture. The prophets Elijah and Elisha, for their part, were accepted not by their own countrymen but by a Phoenician widow and a Syrian who had contracted leprosy: two foreigners, two people of another religion. This is itself striking and it shows how true was the inspired prophecy of the aged Simeon that Jesus would be a “sign of contradiction (semeion antilegomenon)” (Lk 2:34).
Jesus’ words have the power to bring to light whatever each of us holds in the depths of our heart, often mixed like the wheat and the tares. And this gives rise to spiritual conflict. Seeing the signs of the Lord’s superabundant mercy and hearing the “beatitudes” but also the “woes” found in the Gospel, we find ourselves forced to discern and decide. In this case, Jesus’ words were not accepted and this made the enraged crowd attempt to kill him. But it was not yet his “hour”, and the Lord, so the Gospel tells us, “passing through the midst of them, went away”.

It was not his hour, yet the swiftness with which the crowd’s fury was unleashed, and the ferocity of a rage prepared to kill the Lord on the spot, shows us that it is always his hour. That is what I would like to share with you today, dear priests: that the hour of joyful proclamation, the hour of persecution and the hour of the cross go together.

The preaching of the Gospel is always linked to the embrace of some particular cross. The gentle light of God’s word shines brightly in well-disposed hearts, but awakens confusion and rejection in those that are not. We see this over and over again in the Gospels.

The tender love of the merciful father irresistibly draws the prodigal son home, but also leads to anger and resentment on the part of the elder son (cf. Lk 15:11-32).

The generosity of the owner of the vineyard is a reason for gratitude among the workers called at the last hour, but it also provokes a bitter reaction by one of those called first, who is offended by the generosity of his employer (cf. Mt 20:1-16).

The closeness of Jesus, who dines with sinners, wins hearts like those of Zacchaeus, Matthew and the Samaritan woman, but it also awakens scorn in the self-righteous.

The magnanimity of the king who sends his son, thinking that he will be respected by the tenant farmers, unleashes in them a ferocity beyond all measure. Here we find ourselves before the mystery of iniquity, which leads to the killing of the Just One (cf. Mt 21:33-46).

All this, dear brother priests, enables us to see that the preaching of the Good News is mysteriously linked to persecution and the cross.

Saint Ignatius of Loyola – excuse the “family advertising” – expresses this evangelical truth in his contemplation on the Nativity of the Lord. There he invites us “to see and consider what Saint Joseph and Our Lady did in setting out on their journey so that the Lord could be born in extreme poverty and after many labours – experiencing hunger, thirst, heat and cold, injuries and indignities – die on the Cross, and all this for me”. He then invites us, “in reflecting on this, to draw some spiritual profit” (Spiritual Exercises, 116). The joy of the Lord’s birth; the pain of the Cross; persecution.

What reflection can we make to “draw some profit” for our priestly life by contemplating this early appearance of the cross – of misunderstanding, rejection and persecution – at the beginning and at the very heart of the preaching of the Gospel?

Two thoughts occur to me.

First: we are taken aback to see the cross present in the Lord’s life at the very beginning of his ministry, even before his birth. It is already there in Mary’s initial bewilderment at the message of the angel; it is there in Joseph’s sleeplessness, when he felt obliged to send Mary away quietly. It is there in the persecution of Herod and in the hardships endured by the Holy Family, like those of so many other families obliged to live in exile from their homeland.

Why did the Lord embrace the cross fully and to the end? Why did Jesus embrace his entire Passion: his betrayal and abandonment by his friends after the Last Supper, his illegal arrest, his summary trial and disproportionate sentence, the gratuitous and unjustifiable violence with which he was beaten and spat upon…? If mere circumstances conditioned the saving power of the cross, the Lord would not have embraced everything. But when his hour came, he embraced the cross fully. For on the cross there can be no ambiguity! The cross is non-negotiable.

A second thought: true, there is an aspect of the cross that is an integral part of our human condition, our limits and our frailty. Yet it is also true that something happens on the Cross that does not have to do with our human weakness but is the bite of the serpent, who, seeing the crucified Lord defenceless, bites him in an attempt to poison and undo all his work. A bite that tries to scandalize – and this is an era of scandals – a bite that seeks to disable and render futile and meaningless all service and loving sacrifice for others. It is the venom of the evil one who keeps insisting: save yourself.

It is in this harsh and painful “bite” that seeks to bring death, that God’s triumph is ultimately seen. Saint Maximus the Confessor tells us that in the crucified Jesus a reversal took place. In biting the flesh of the Lord, the devil did not poison him, for in him he encountered only infinite meekness and obedience to the will of the Father. Instead, caught by the hook of the cross, he devoured the flesh of the Lord, which proved poisonous to him, whereas for us it was to be the antidote that neutralizes the power of the evil one.

These are my reflections. Let us ask the Lord for the grace to profit from this teaching. It is true that the cross is present in our preaching of the Gospel, but it is the cross of our salvation. Thanks to the reconciling blood of Jesus, it is a cross that contains the power of Christ’s victory, which conquers evil and delivers us from the evil one. To embrace it with Jesus and, as he did before us, to go out and preach it, will allow us to discern and reject the venom of scandal, with which the devil wants to poison us whenever a cross unexpectedly appears in our lives.

“But we are not among those who shrink back (hypostoles)” (Heb 10:39), says the author of the Letter to the Hebrews. “We are not among those who shrink back”. This is the advice that the author gives us. We are not scandalized, because Jesus himself was not scandalized by seeing that his joyful preaching of salvation to the poor was not received wholeheartedly, but amid the shouts and threats of those who refused to hear his word or wanted to reduce it to legalisms such as moralism or clericalism.

We are not scandalized because Jesus was not scandalized by having to heal the sick and to set prisoners free amid the moralistic, legalistic and clerical squabbles that arose every time he did some good.

We are not scandalized because Jesus was not scandalised that his proclamation of a year of grace of the Lord – a year that embraces all of history – provoked a public scandal in matters that today would barely make the third page of a local newspaper.

We are not scandalized because the preaching of the Gospel is effective not because of our eloquent words but because of the power of the cross (cf. 1 Cor 1:17).

The way we embrace the cross in our preaching of the Gospel – with deeds and, when necessary, with words – makes two things clear. That the sufferings that come from the Gospel are not ours, but rather “the sufferings of Christ in us” (2 Cor 1:5), and that “we do not preach ourselves but Jesus Christ as Lord and ourselves as servants of all for the love of Jesus” (2 Cor 4:5).

I would like to end by sharing one of my memories. “Once, at a dark moment in my life, I asked the Lord for the grace to free me from a difficult and complex situation. A dark moment. I had to preach the Spiritual Exercises to some women religious, and on the last day, as was customary in those days, they all went to confession. One elderly Sister came; she had a clear gaze, eyes full of light. A woman of God. At the end of the confession, I felt the urge to ask her a favour, so I said to her, ‘Sister, as your penance pray for me, because I need a particular grace. Ask the Lord for it. If you ask the Lord, surely he will give it to me’. She paused in silence for a moment and seemed to be praying, then she looked at me and said, ‘The Lord will certainly give you that grace, but make no mistake about it: he will give it to you in his own divine way’. This did me much good, hearing that the Lord always gives us what we ask for, but that he does so in his divine way. That way involves the cross. Not for masochism. But for love, love to the very end”. 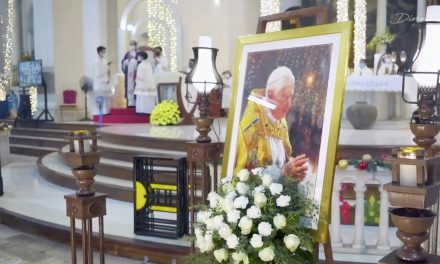 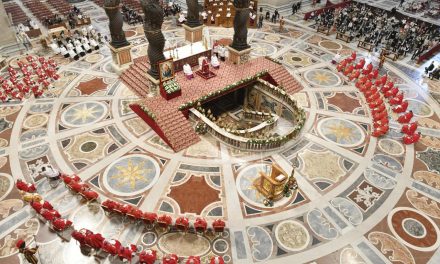 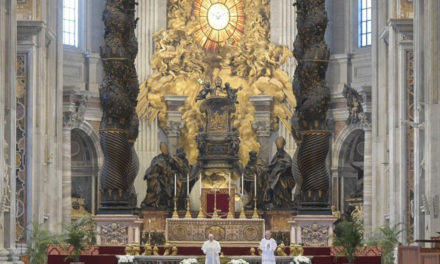 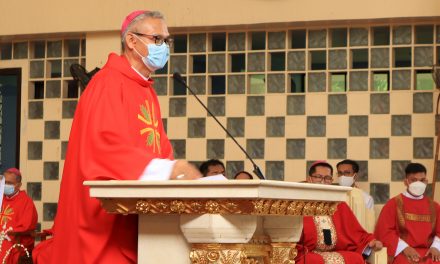