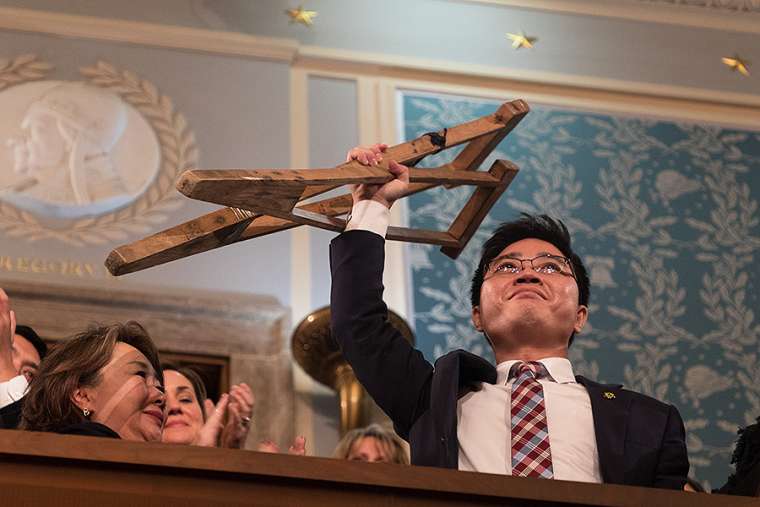 Ji Seong-ho holds his crutches at the 2018 State of the Union address. Public Domain.

Washington D.C. (CNA/EWTN News).- “Before his escape, when Seong-Ho was being tortured by North Korean officials, there was one thing that kept him from losing hope: over and over again he recited the Lord’s Prayer,” President Donald Trump said in his speech at the 2018 National Prayer Breakfast in Washington, D.C. on Thursday.

Seong-Ho’s courage and faith were also highlighted by Trump during his State of the Union address in January.

Many North Korean defectors like Ji Seong-ho encounter Christianity through the missionaries who organize the underground railroad that makes it possible for them to escape to China, where they still face the constant risk of being repatriated back to North Korea.

The journey with the Christian missionaries often leads to conversion for defectors. Eighty to ninety percent of North Koreans who pass through the underground railroad identify as Christian after reaching South Korea, according to a 2015 study by Dr. Jin-Heon Jung entitled “Underground Railroads of Christian Conversion.”

One Catholic Church in Seoul baptized 60 North Korean defectors in one day in June 2016, after Father Raymond Lee Jong-nam catechized and assisted them with the transition to life in South Korea, according to UCA News.

“I thank Father Lee for showing us deep love like our father and I will live this new life to the full in this church,” one newly baptised North Korean told the Union of Catholic Asian News.

Ji Seong-ho, whose story gained national attention when he triumphantly raised up his crutches during the president’s State of the Union address last week, told EWTN that prayer sustained him during his escape.

“I offered so many prayers to my God…I started to pray save me, rescue me,” he said.

Ji escaped North Korea in 2006 by crossing the Tumen River into China, and then journeying 6,214 miles across China, Laos, Myanmar, and Thailand to reach South Korea on crutches due to an earlier tragedy that left him an amputee.

Now that he has reached freedom, Ji Seong-ho said he feels called by God to rescue other North Korean refugees.

“God’s love needs to be conveyed to the people of North Korea and North Korean souls need God’s salvation. Under that conviction, I am doing what I am doing,” he said.

According to the Korean Ministry of Unification, more than 31,000 North Korean defectors have entered South Korea since 1998.

However, the annual number of North Koreans arriving in the South has declined since Chinese President Xi Jinping assumed power and cracked down on Christian missionaries.

Last year had the lowest figure for North Korean defections to South Korea since 2001, according to the Unification Ministry’s data.

For the more than 25 million people who remain within North Korea, human rights violations abound, according to the U.S. State Department.

North Korea has consistently been ranked the worst country for persecution of Christians by Open Doors.

“The Catholic diocese of Pyongyang is vacant and the last bishop was appointed in March 1944. There are no native Catholic clerics in North Korea, but visiting priests occasionally say Mass. In 2008 Father Paul Kim Kwon-soon, a South Korean Franciscan, became the first priest to be granted a residency permit,” according to an Aid to the Church in Need UK report.

One French priest, Father Philippe Blot, has visited North Korea several times. He spoke to Parisians at Notre Dame Cathedral in April 2017 about his perspective on the country that singles out Christians for torture and execution.

“As a missionary and as a Catholic priest, I am speaking here on behalf of all those Koreans who for more than 60 years have been living the longest Way of the Cross in human history,” he said.

Father Philippe asked Catholics to pray “ardently every day for this crucified people.” 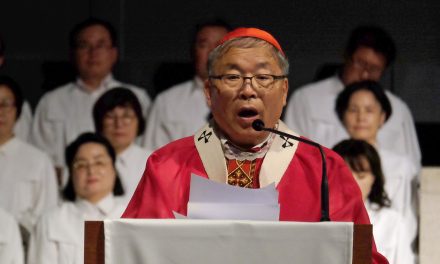 Catholics pray for reconciliation on 70th anniversary of the Korean War