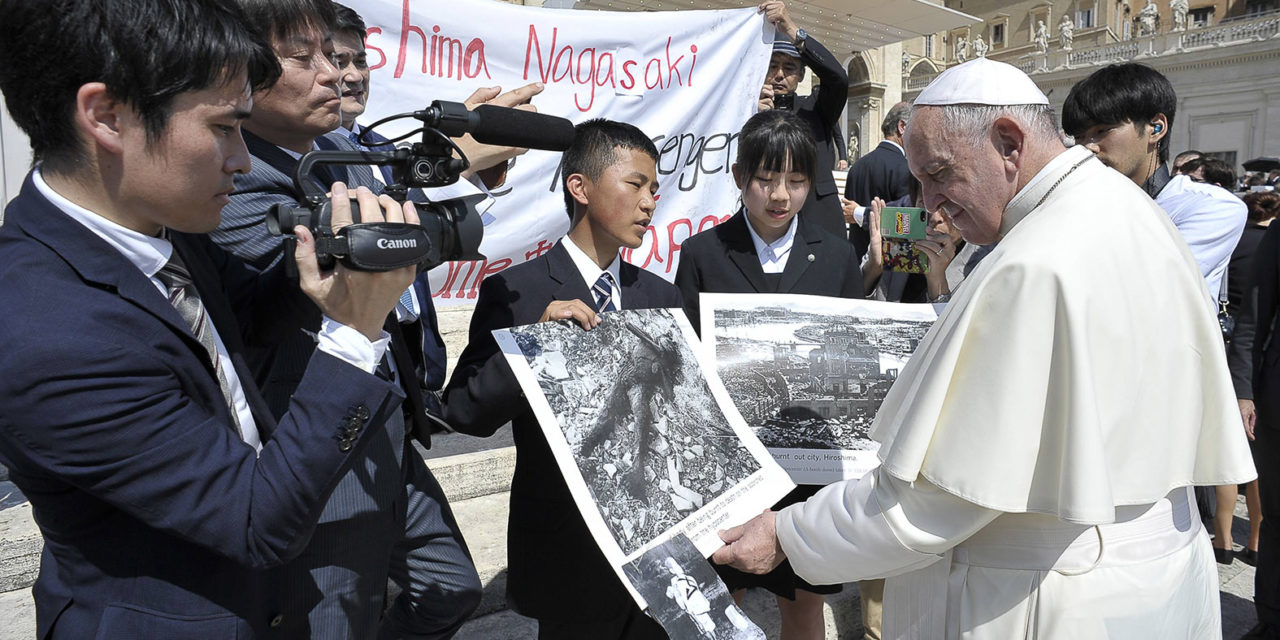 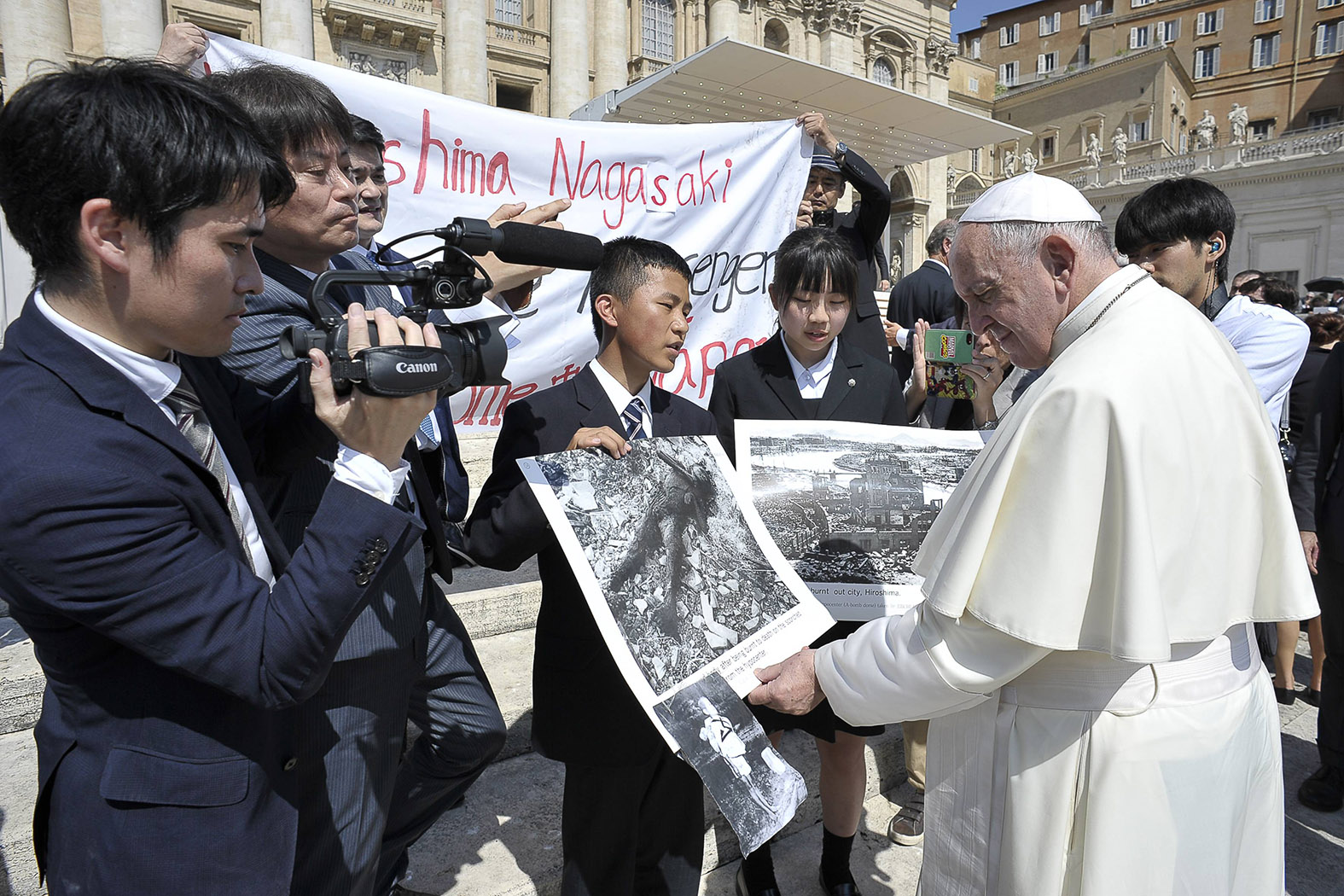 Pope Francis examines photos of the aftermath of the 1945 atomic bombing of Japan as he greets members of the Hiroshima and Nagasaki Youth Peace Messengers at his weekly general audience June 19, 2019. CNS/VATICAN MEDIA

VATICAN— With the anniversary of the atomic bombing of Hiroshima and Nagasaki in August 1945, the bishops of Japan are renewing calls and prayers to build peace by abolishing nuclear weapons worldwide and promoting integral human development.

They also expressed hope that Pope Francis’ visit in November and his expected calls for peace will strengthen people’s desire and boost efforts to bring about a nuclear weapon-free world.

St. John Paul II visited both cities during a February 1981 trip and appealed for peace, calling for the elimination of nuclear weapons around the world.

“Let us work hard for peace through justice; let us make a solemn decision now that war no longer be tolerated and seen as a means to resolve disagreements; let us promise with our counterparts that we will tirelessly strive for disarmament and the abolition of all nuclear arms, let us replace violence and hatred with trust and care,” he said, addressing world leaders.

Throughout that speech at the Hiroshima Peace Memorial Park, St. John Paul repeated that “to remember the past is to work for the future,” which inspired Japan’s bishops to observe Ten Days of Prayer for Peace from August 6 to 15 every year.

Archbishop Joseph Mitsuaki Takami of Nagasaki, president of the Catholic Bishops’ Conference of Japan, said in a message for the days of prayer that guaranteeing peace and security in the world required “not only to eliminate the nuclear threat by abolishing nuclear weapons, but at the same time to make all people richer in all aspects” through integral human development.

He said the bishops were looking forward to Pope Francis bringing “a new peace message to the world” during his expected visit, the second ever to Japan by a pope and nearly 39 years after St. John Paul stepped foot there.

Nagasaki Mayor Tomihisa Taue said he hoped the pope would convey Japanese dreams that “Nagasaki be the last atomic bombing site” in history, according to an interview in mid-July with japan-forward.com, the online English site of the Sankei Shimbun daily newspaper.

Taue also said he hoped the visit would draw greater attention to the Hidden Christian Sites in the Nagasaki Region, which became a UNESCO World Heritage Site in 2018.

The sites were where Christians secretly lived out their faith during the fierce prohibition of Christianity between the 17th and 19th centuries. When Japan was reopened to the West in 1853, Christian missionaries were astonished to find about 30,000 Christians, mainly in Nagasaki, who had kept the faith and passed it on in their families from generation to generation.

When the second atomic bomb dropped on Nagasaki, the “cradle of Christianity” in Japan, some 8,000 Catholics died. The Nagasaki Diocese at the time had about 60,000 Catholics, nearly one-fourth of all the Catholics in the wartime Japanese Empire.

“The pilot of the U.S. plane that dropped the atomic bomb on Nagasaki was actually a Catholic,” Archbishop Takami said in an interview with japan-forward.com.

The city’s cathedral was located about 540 yards from ground zero. A number of worshipers were inside praying the morning of Aug. 9, 1945; they were all killed and the cathedral was destroyed.

U.S. Cardinal John F. O’Hara, then the bishop of Buffalo, New York, and Bishop Michael J. Ready of Columbus, Ohio, officiated at the cornerstone laying ceremony in 1946 of a temporary church, which was completed and dedicated by Cardinal Norman Gilroy of Sydney later that year. The Urakami Cathedral was rebuilt in 1959 and it is one of the largest Catholic churches in Japan.

A gilded wooden cross that survived the bombing of the cathedral was recently returned to the city.

Tanya Maus, director of the Peace Resource Center at Wilmington College in Ohio, gave Archbishop Takami the cross during a special ceremony Aug. 7.

The three-foot-tall cross had been given to 2nd Lt. Walter Hooke, a U.S. Marine from Yonkers, New York, who had been stationed in Nagasaki from October 1945 to February 1946, according to the Japanese daily, the Asahi Shimbun.

A devout Catholic, he befriended the late-Archbishop Paul Aijiro Yamaguchi of Nagasaki, who gave him the cross that had been salvaged from the rubble.

Hooke, who died in 2010 at the age of 97, kept the cross in his family’s living room, but later donated it to the Peace Resource Center at the Quaker college in 1982. The center then decided to return the cross to the cathedral.

“I am delighted the cross is alive,” said the 73-year-old Archbishop Takami, who was growing in his mother’s womb when the bomb fell.

“Atomic bomb victims will die, but the cross will remain as a living witness to what happened in Nagasaki,” he told the newspaper.

“The cross tells how brutal humans can be, and at the same time, it gives us hope,” he said. CBCPNEWS 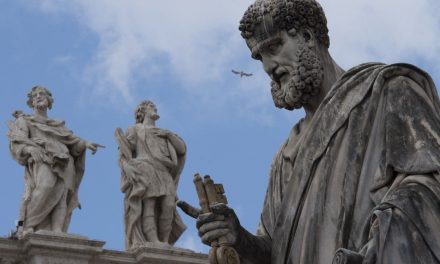 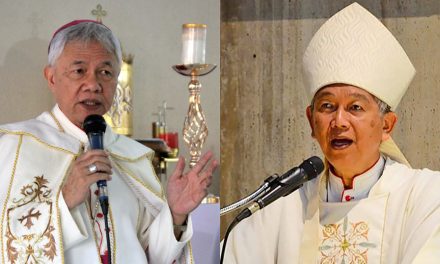 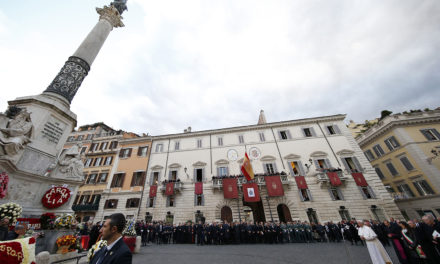