Pastoral Letter of Abp. Ledesma on the Environment 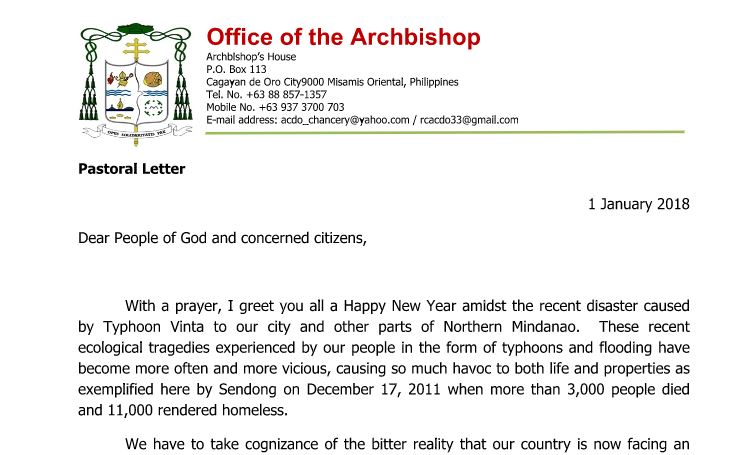 With a prayer, I greet you all a Happy New Year amidst the recent disaster caused by Typhoon Vinta to our city and other parts of Northern Mindanao.  These recent ecological tragedies experienced by our people in the form of typhoons and flooding have become more often and more vicious, causing so much havoc to both life and properties as exemplified here by Sendong on December 17, 2011 when more than 3,000 people died and 11,000 rendered homeless.

We have to take cognizance of the bitter reality that our country is now facing an alarming ecological crisis, which unless soon averted may lead to an impending environmentally-based economic and social collapse.

Much of the country’s physical resources are already seriously depleted.  Only less than one million hectares or four percent (4%) of the dipterocarp forest remain from 17 million hectares a century ago.  Seventy percent (70%) of our mangrove forests are destroyed.  Forty percent (40%) of our watersheds are seriously eroded.  Of the 13 major bays, 10 already are described as biologically dead making our fishing communities the poorest of the poor.  Seventy-five percent (75%) of our coastal reefs are severely damaged by destructive illegal fishing and siltation.

This is indeed a great tragedy in a country that has been so blessed by our Creator.  Our country before had been described as the center of marine life on earth and that by per-unit land area, the Philippines was the richest in terms of mega-diversity (UN-FAO Study).

It is high time to examine the present state of the Philippine environment.  Why have we allowed our forests to be decimated?  Why have we allowed hydraulic and unsustainable mining practices causing so much havoc to the ecosystems?  Why are costly agricultural technologies tied-up to the use of toxic chemicals being promoted and practiced when there are more ecologically sustainable ways?  Why are mining industries allowed to treat the bays as their waste pits?

Yes, God’s creation that includes all its bio-diversity, all the flora and fauna and all the ecosystems are only ours to protect, as God’s stewards, so that life on earth can continue for God’s greater glory.  We may all be guilty of committing the sins of omissions for not being able to do our mandate as God’s stewards of His vanishing creation, now threatened more than ever.

It is therefore imperative to raise the people’s consciousness to have a deeper understanding of the environmental issues.  It is in this light that a People’s Environmental Summit will be held on January 10, 2018 at the Atrium, Lim Ket Kai Complex.  A report will be issued by Task Force Kinaiyahan that has been mandated by the Court of Appeals to protect the environment by virtue of the Writ of Kalikasan issued on February 28, 2013.  The Task Force is led by Sulog, One Sendong is Enough, which is a coalition of cooperatives, church-based organizations, NGOs, academe and environmental organizations and supported by 12 agencies of government.

I am calling on everyone to support this historical convergence to come up with a plan of action and regain the integrity of God’s creation.  Together let us serve notice to one and all that we are one in protecting God’s creation, and heal the wounds of Mother Earth for the sustainable development of our communities.

Let us all be inspired by Pope Francis’ invitation in Laudato Si’: to see, judge, act and celebrate as God’s co-creators of this world and its future.  With my prayers for a self-regenerating new year. 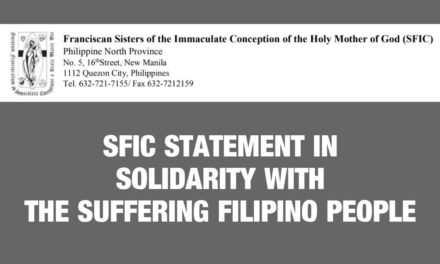 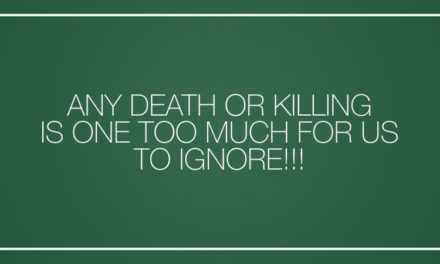 ANY DEATH OR KILLING IS ONE TOO MUCH FOR US TO IGNORE!!! 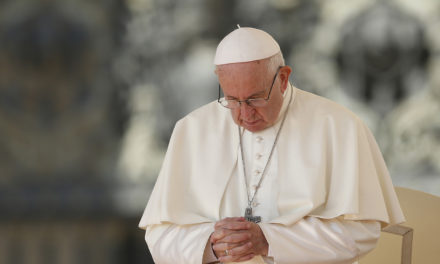 Message of Pope Francis for Lent 2019 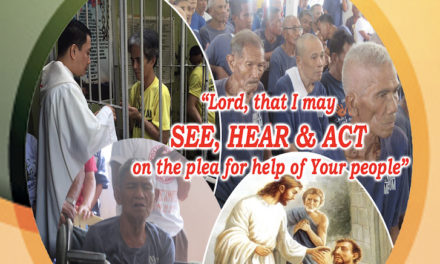