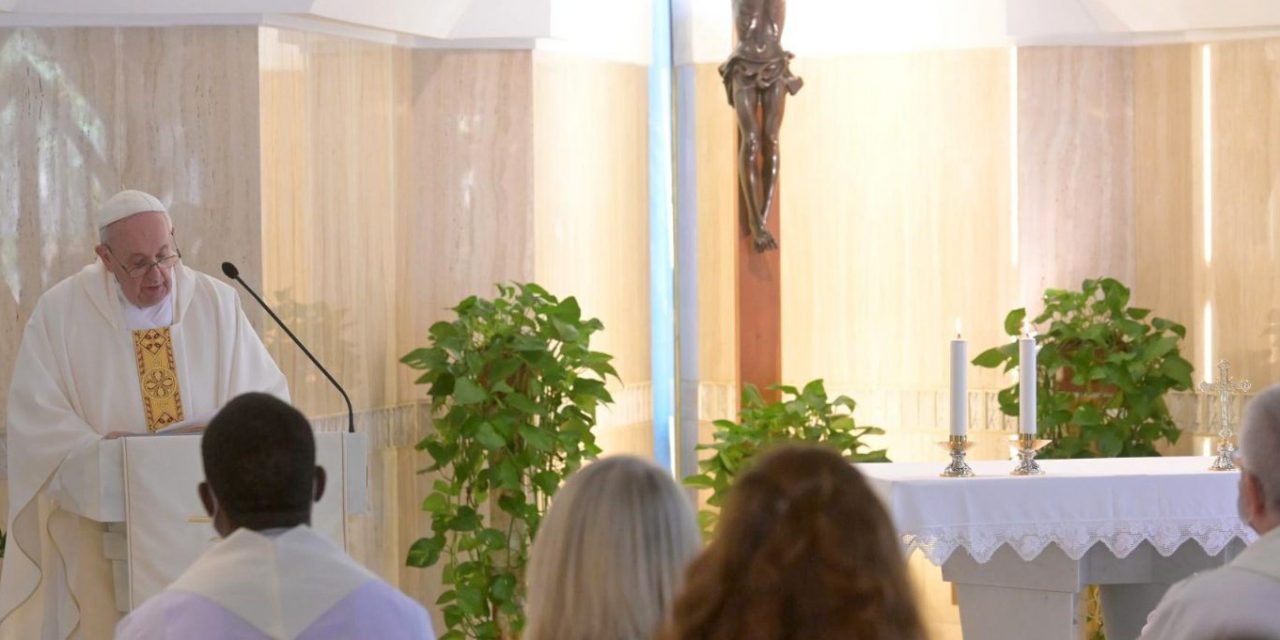 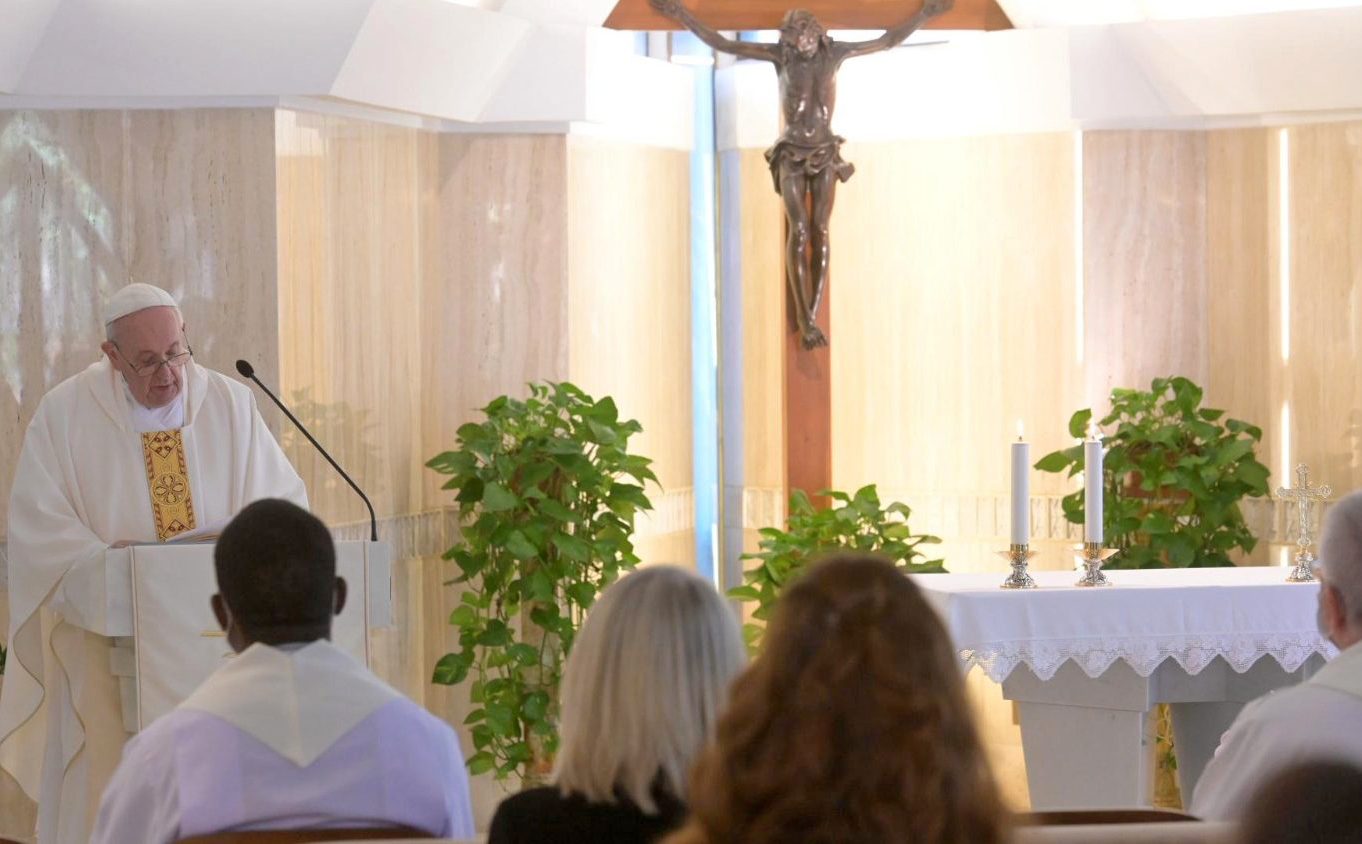 VATICAN— Pope Francis offered Mass Wednesday asking the Virgin Mary to help Christians recognize the face of Christ in each migrant and refugee.

“As we undertake to seek the face of the Lord, we may recognize Him in the face of the poor, the sick, the abandoned, and the foreigners whom God places on our way. And this encounter becomes for us a time of grace and salvation, as it bestows on us the same mission entrusted to the Apostles,” Pope Francis said in the Casa Santa Marta chapel July 8.

“May the Virgin Mary, Solacium migrantium, ‘Solace or Comfort of Migrants,’ help us discover the face of Her Son in all our brothers and sisters who are forced to flee from their homeland because of the many injustices that still afflict our world today,” the pope said in his homily.

Invoking the new Marian title added to the Litany of Loreto in June, Pope Francis prayed for the migrants who are in detention camps in Libya and elsewhere who are often subject to abuse and violence.

He recommended words of Christ that can be used as a part of one’s daily examination of conscience: “Truly, I say to you, whatever you did for one of these least brothers of mine, you did for me.”

Pope Francis offered Mass at his residence to mark the seventh anniversary of his visit to the Italian island of Lampedusa.

Due to the coronavirus pandemic, only the staff of the Migrants and Refugees Section of the Vatican Department for Promoting Integral Human Development were in attendance.

“Today’s responsorial Psalm urges us always to seek the Lord’s face: ‘Rely on the mighty Lord, constantly seek His face,'” he said. “This quest is a fundamental attitude in the life of all the faithful, who have come to realize that the ultimate goal of their existence is the encounter with God.”

During his homily, the pope told the story of his encounter with an Ethiopian migrant during his visit to Lampedusa in 2013, recalling that he later found out that his translator at the time had “distilled” the migrant’s story because of the intensity of the suffering recounted.

“This happens today with Libya,” he said. “They give us a ‘distilled’ version. The war is bad, we know it, but you cannot imagine the hell they live through there in those detention camps. And these people only came with hope to cross the sea.”

Pope Francis has frequently spoken out about the plight of migrants detained in Libya this year. On June 14 the pope called on the international community to “take their plight to heart” and to identify pathways and means to provide them with the protection that they need for a dignified condition, adding that the health situation with the coronavirus pandemic has aggravated the migrants’ already precarious conditions.

Lampedusa, the southernmost part of Italy, is located 160 nautical miles from the Libyan capital of Tripoli. It is a primary destination for migrants from Africa seeking entry to Europe.

Pope Francis visited the Mediterranean island on July 8, 2013. The trip, his first pastoral visit outside Rome, signaled that concern for migrants would be at the center of his pontificate.

The pope quoted part of his Lampedusa homily in the livestreamed Mass. He said: “The culture of comfort, which makes us think only of ourselves, makes us insensitive to the cries of other people, makes us live in soap bubbles which, however lovely, are insubstantial; they offer a fleeting and empty illusion which results in indifference to others; indeed, it even leads to the globalization of indifference.”

“In this globalized world, we have fallen into globalized indifference. We have become used to the suffering of others: it doesn’t affect me; it doesn’t concern me; it’s none of my business.”

The pope then responded with a reflection on how the Apostles’ lives were transformed by their encounter with Christ.

“The personal encounter with the Lord, a time of grace and salvation, immediately entails a mission: ‘As you go, Jesus tells them, make this proclamation: The kingdom of heaven is at hand,’” he said. “Encounter and mission cannot be separated.” 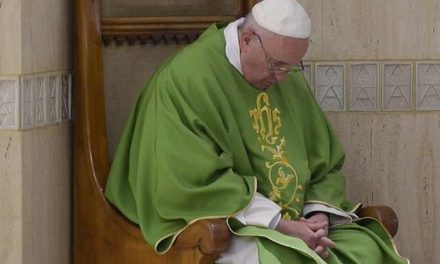 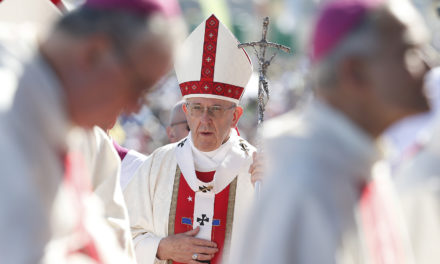 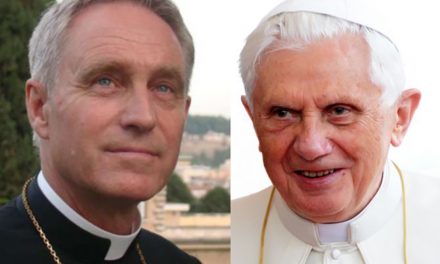 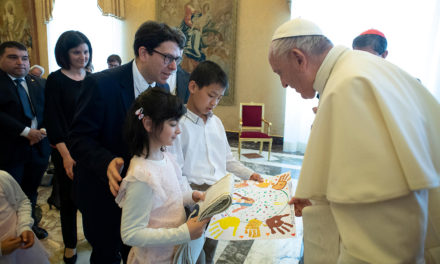