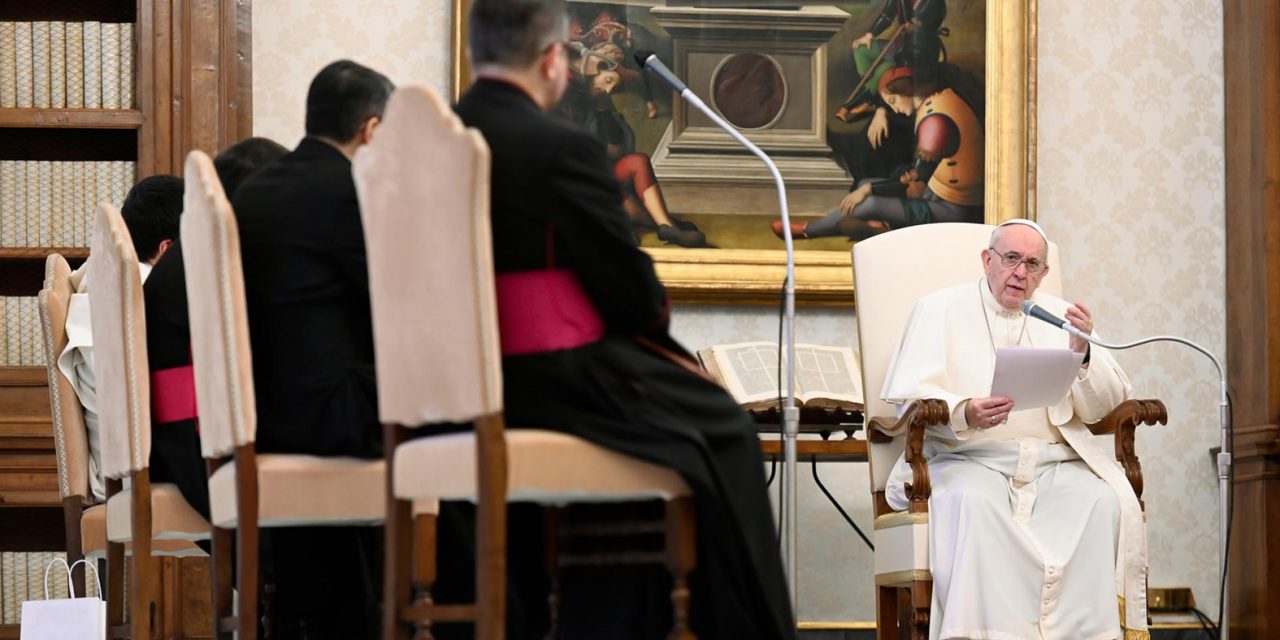 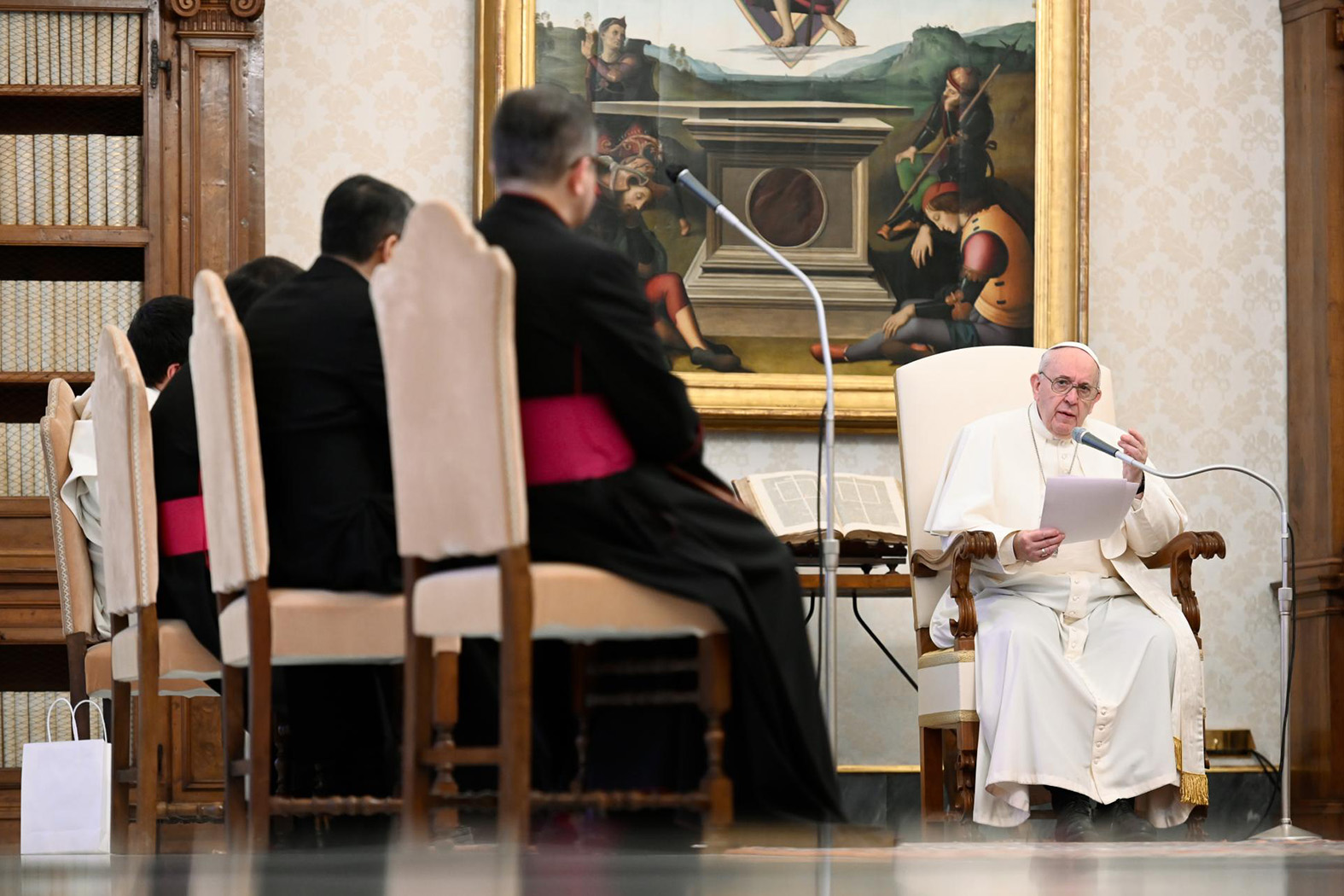 Pope Francis leads his general audience in the papal library of the Apostolic Palace at the Vatican Dec. 2, 2020. VATICAN MEDIA

VATICAN— People with disabilities must have access to the sacraments and, as missionary disciples, the ability to be full and active participants in the life of their Catholic parish, Pope Francis said Thursday.

“Before all else, I strongly reaffirm the right of persons with disabilities to receive the sacraments, like all other members of the Church,” he said in a message for the International Day of Persons with Disabilities Dec. 3.

““All liturgical celebrations in the parish should be accessible” to the disabled, he continued, “so that, together with their brothers and sisters, each of them can deepen, celebrate, and live their faith.”

“I reiterate the need to make available suitable and accessible means for handing on the faith,” he said. “No one should be excluded from the grace of these sacraments.”

Francis emphasized that, by virtue of their baptism, disabled people are called to missionary discipleship just as much as every other baptized person. He encouraged parishes to include them not only as “recipients” of pastoral ministry, but also as “active subjects.”

“All the baptized, whatever their position in the Church or their level of instruction in the faith, are agents of evangelization,” he said, quoting his 2013 apostolic exhortation “Evangelii gaudium.”

He also urged that special attention be paid to those who have not yet received the sacraments of Christian initiation, saying “they should be welcomed and included in programmes of catechesis in preparation for these sacraments.”

Though it takes effort to fully include everyone, according to their own gifts and talents, he said “the active participation of people with disabilities in the work of catechesis can greatly enrich the life of the whole parish.”

“Precisely because they have been grafted onto Christ in baptism,” Francis wrote, “they share with him, in their own particular way, the priestly, prophetic, and royal mission of evangelizing through, with and in the Church.”

He added that he hoped that resources for catechesis would be made available cost-free to those who need them, also by utilizing technology, which has become even more important during the pandemic.

“I trust that, in parish communities, more and more people with disabilities can become catechists, in order to pass on the faith effectively, also by their own witness,” he said.

“Parish communities should be concerned to encourage among the faithful a welcoming attitude towards people with disabilities,” he explained.

“Creating a fully accessible parish requires not only the removal of architectural barriers, but above all, helping parishioners to develop attitudes and acts of solidarity and service towards persons with disabilities and their families. Our aim should be to speak no longer about ‘them,’ but rather about ‘us.'”

The theme of this year’s International Day of Persons with Disabilities is “Building Back Better: Toward a Disability-inclusive, Accessible and Sustainable post-COVID-19 World.”

Pope Francis said “it is important on this Day, to promote a culture of life that constantly affirms the dignity of every person and works especially to defend men and women with disabilities, of all ages and social conditions.”

Referring to the parable of the houses built on rock and sand, he said “inclusion should be the first ‘rock’ on which to build our house.”

In society, “inclusion should be the ‘rock’ on which to build programmes and initiatives of civil institutions meant to ensure that no one, especially those in greatest difficulty, is left behind,” he said. 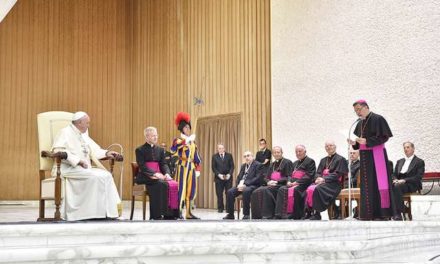 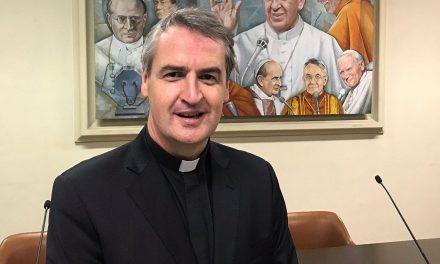 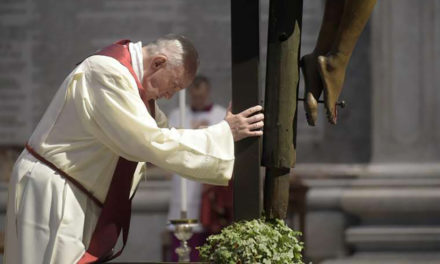