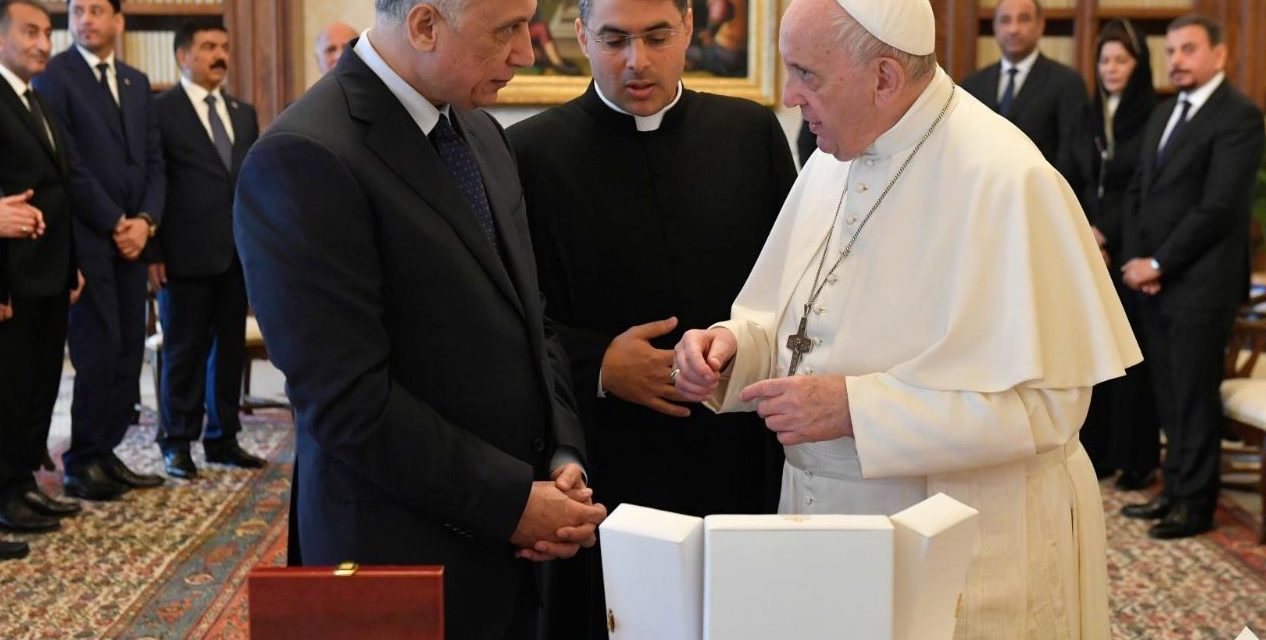 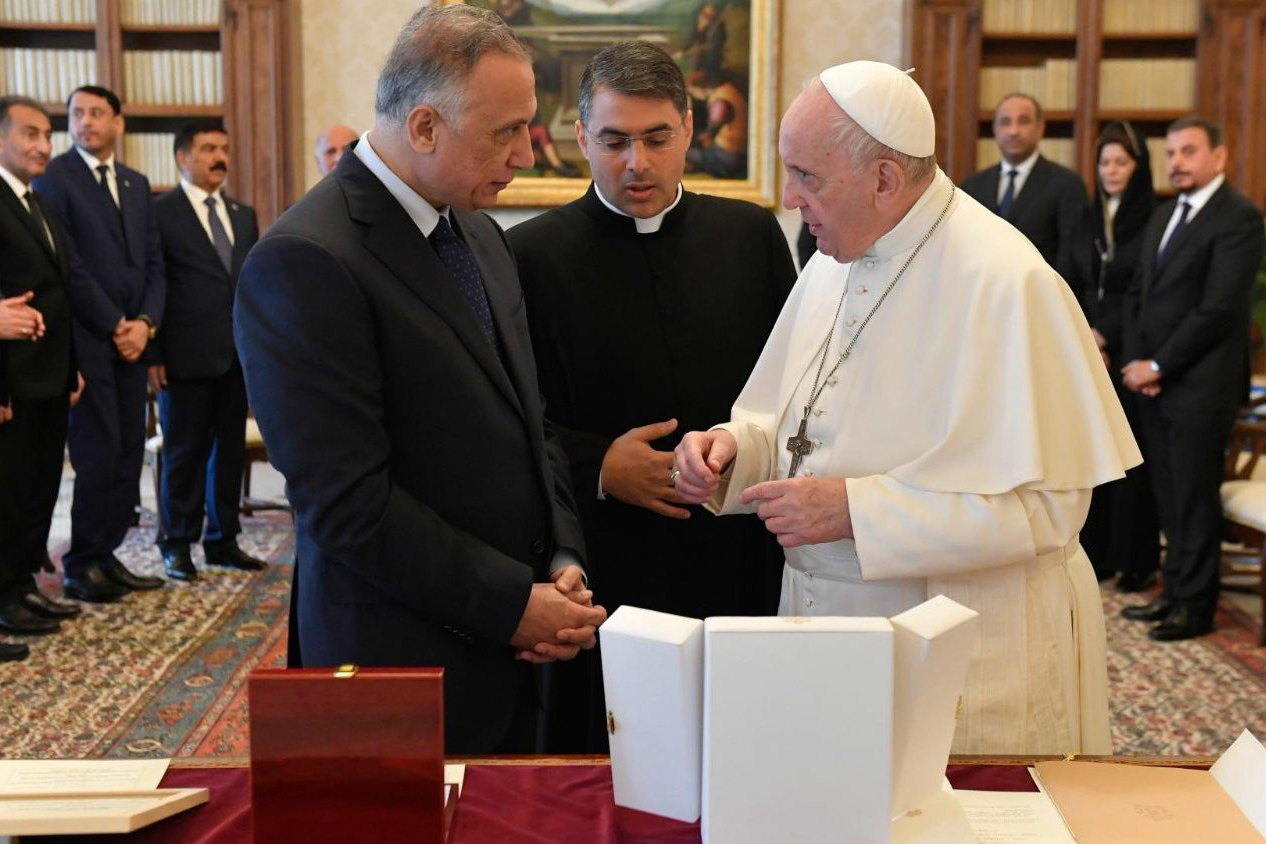 VATICAN— Pope Francis and Iraq’s Prime Minister Mustafa Al-Kadhimi discussed the importance of protecting the Christian presence in the Middle East during a meeting at the Vatican on Friday.

According to a Vatican press release, the roughly 30-minute private meeting included conversation about Pope Francis’ visit to Iraq in March “and the moments of unity experienced by the Iraqi people.”

They also spoke about “the importance of promoting a culture of national dialogue to foster stability and the process of reconstruction of the country.”

The Vatican said that Al-Kadhimi and Pope Francis discussed “the importance of protecting the historical presence of Christians in the country with adequate legal measures and the significant contribution they can make to the common good, highlighting the need to guarantee them the same rights and duties as other citizens.”

The Christian population in Iraq has been dwindling for decades, from around 1.4 million in 2003 to around 250,000 Christians in the country.

The situation in the entire Middle East and the need to “re-establish a climate of trust and peaceful coexistence” were also discussed by the two men.

The Iraqi prime minister met separately with the Secretary of State Cardinal Pietro Parolin and the Secretary for Relations with States, Archbishop Paul Gallagher.

At the end of their meeting, Pope Francis and Al-Kadhimi exchanged gifts.

Pope Francis gave the prime minister a bronze artwork with grapevines and a dove which had “Be messengers of peace” written in Italian on the bottom. He also gave copies of his 2021 message for peace, the 2019 document on human fraternity, and his encyclicals Laudato si’ and Fratelli tutti in English and Arabic.

The prime minister gave the pope a reproduction of Leonardo da Vinci’s Last Supper, created in leather by a woman while she was held captive by ISIS.

The pope also received a cross made from wood and stone taken from the ruins of the ISIS-destroyed St. Addai Church in the Iraqi town of Karamlesh on the Nineveh Plains.

When ISIS militants captured the northern Iraqi town in August 2014, they destroyed the Chaldean Catholic church, breaking windows, burning benches, desecrating a tomb, and decapitating a statue of the Virgin Mary.

The Knights of Columbus contributed $2 million to help rebuild many of the town’s homes and the church, which was consecrated in 2018.

The Catholic fraternal organization reported in April that around 450 of the 820 families that had fled Karamlesh when ISIS invaded have now returned home. About 30% of the population has moved abroad and some families remained in Erbil.

During his March 5-8 visit to Iraq, Pope Francis did not visit Karamlesh, but he prayed before the church’s partially restored statue of the Virgin Mary when he offered Mass in Erbil.

On his return flight to Rome, Pope Francis told journalists that the sight of the destroyed churches and ruins in Mosul and the Nineveh Plains in northern Iraq left him speechless.

“When I stopped in front of the destroyed church, I had no words… beyond belief,” Francis said in the in-flight press conference.

The pope said that he had read about and seen pictures of the destruction in northern Iraq, but what he saw in person in Mosul and Qaraqosh was unimaginable.

Francis’ historic trip to Iraq brought him from Baghdad to the birthplace of Abraham and finally to the rubble-strewn city of Mosul, where the Islamic State declared its caliphate in 2014.

“But then what touched me most was the testimony of a mother in Qaraqosh,” Pope Francis said.

“She is a woman who lost her son in the first Islamic State bombings, and she said a word: ‘forgiveness.’ I was moved.” 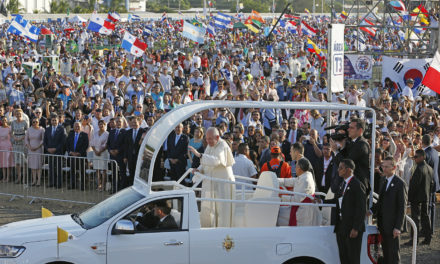 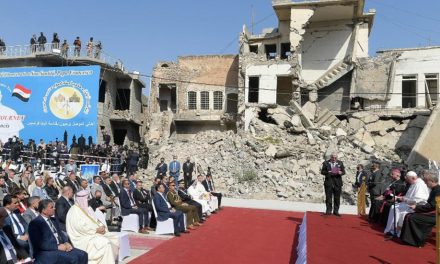 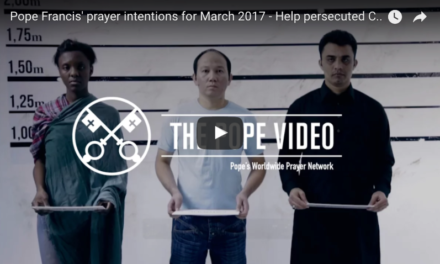 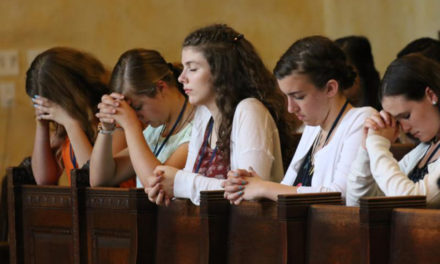