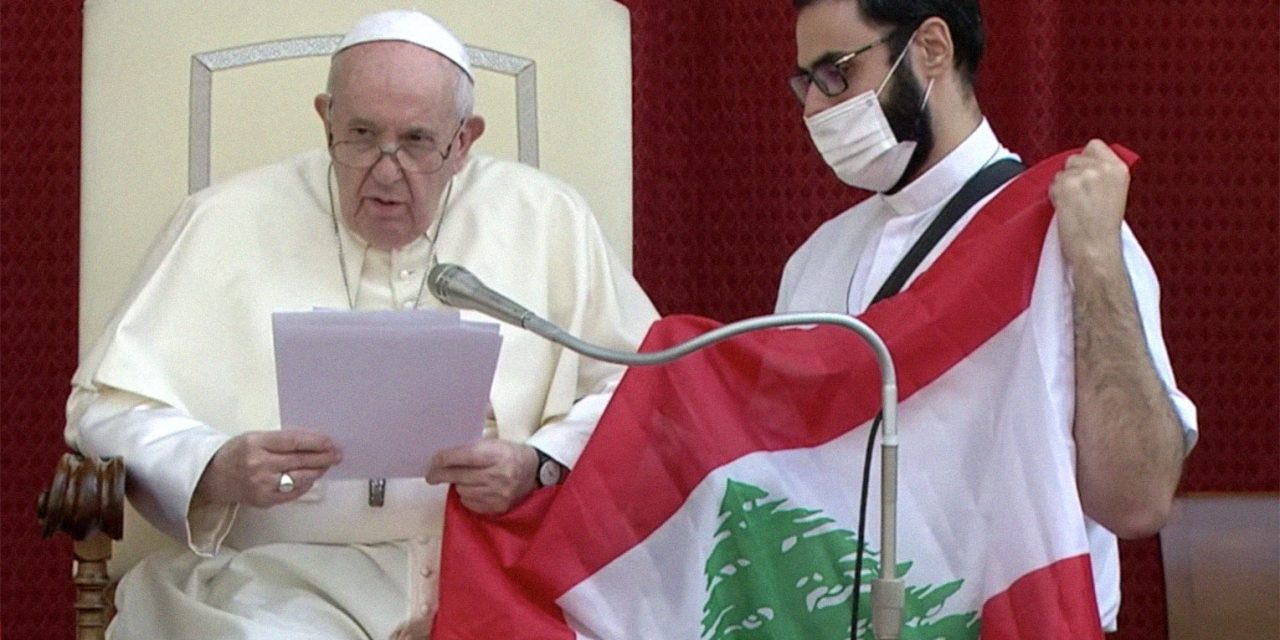 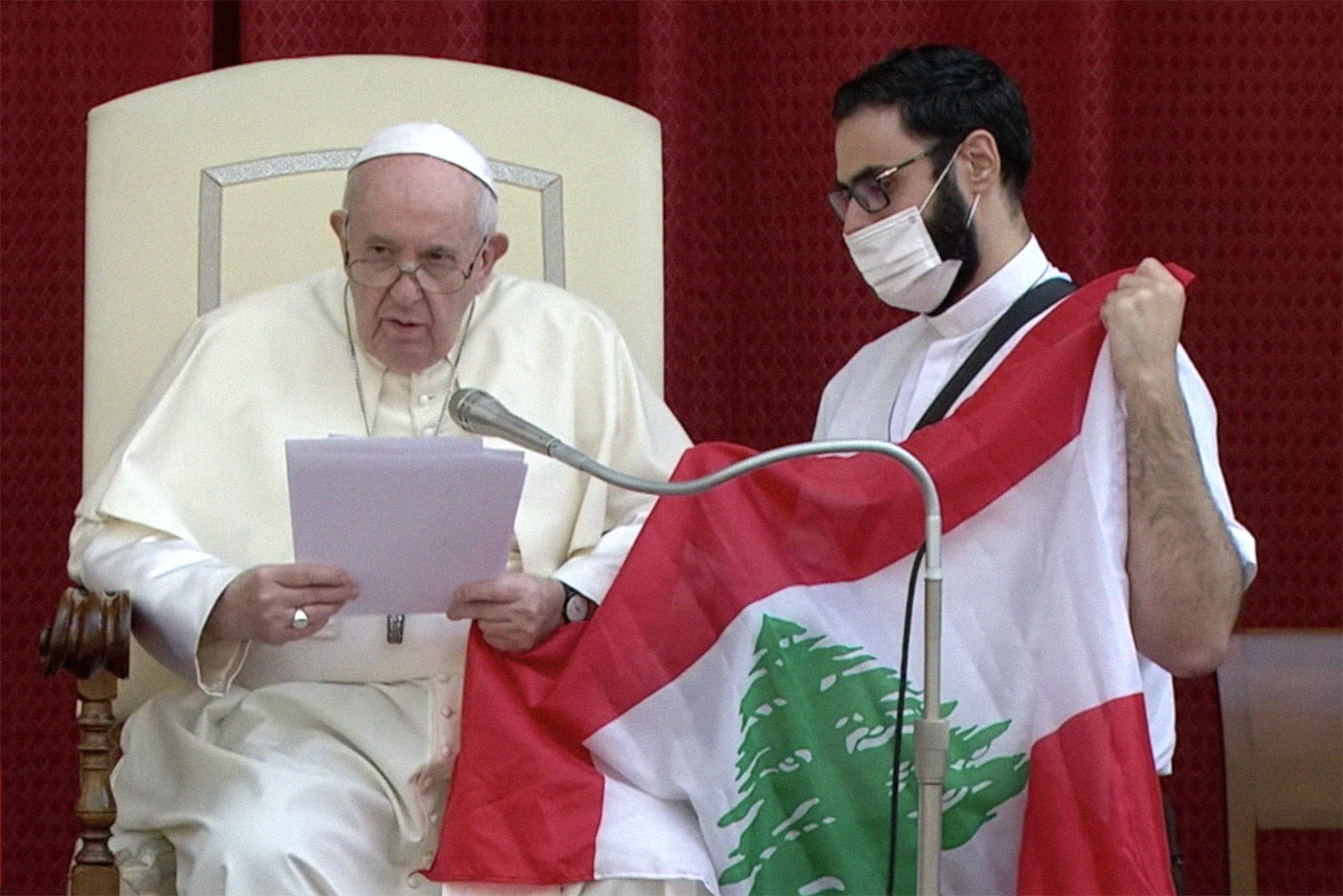 Pope Francis and a Lebanese priest holding Lebanon’s flag during the during the pontiff’s general audience at the San Damaso courtyard in the Vatican on September 2, 2020. SCREENSHOT/VATICAN NEWS

VATICAN— Pope Francis has invited Lebanese Christian leaders to the Vatican for a day of prayer on July 1 for “the worrying situation in the country.”

The pope made the announcement from window of the Vatican’s Apostolic Palace on May 30 after praying the Angelus with pilgrims gathered in St. Peter’s Square.

The leaders of the main Christian communities present in Lebanon will “pray together for the gift of peace and stability,” Francis said.

“I entrust this intention to the intercession of the Mother God, so venerated at the Shrine of Harissa, and from this moment, I ask you to accompany the preparation of this event with solidarity in prayer, invoking a more peaceful future for this beloved country.”

Lebanon has faced a financial and political crisis for months, as political leaders have failed to form a government to implement reforms after the devastating explosion in Beirut’s port on Aug. 4. The blast killed nearly 200 people, injured 600 others, and caused more than $4 billion in damage.

Before the explosion, the country was already facing severe economic pressure. Unemployment had soared and the national currency had lost at least 80% of its value against the U.S. dollar since 2019, according to AP.

Pope Francis met with Prime Minister-designate Saad Hariri on April 22 at the Vatican, where the Lebanese leader also met with Vatican Secretary of State Cardinal Pietro Parolin and Secretary for Relations with States Archbishop Paul Gallagher.

Saad Hariri was given the task of forming a new government last October following the resignations of the leaders Hassan Diab in August and Mustapha Adib in September. This development came less than a year after Hariri himself had resigned as prime minister, on Oct. 29, 2019, in the wake of mass protests.

Cardinal Bechara Boutros Rai, the leader of Lebanon’s Maronite Catholics, has repeatedly urged the country’s political leaders to “overcome the logic of partisan interests” and form a government to rescue the country.

Rai said in February that the international community had a responsibility to help prevent Lebanon’s collapse.

The cardinal said that there was a “great chasm” between the people in political power, with their “personal interests and calculations,” and those who suffer “poverty, deprivation, and hunger.”

The pope said March 8 that he promised Cardinal Rai that he would visit Lebanon in the future.

Pope Francis also called for a renewed political commitment to fostering the stability of Lebanon in this year’s speech to diplomats accredited to the Holy See.

The pope expressed his “hope for renewed political commitment, both national and international, to fostering the stability of Lebanon, which is experiencing an internal crisis and risks losing its identity and finding itself caught up even more in regional tensions.”

“A weakening of the Christian presence risks destroying internal equilibrium and the very reality of Lebanon. Moreover, without an urgently needed process of economic recovery and reconstruction, the country risks bankruptcy, with the possible effect of a dangerous drift towards fundamentalism,” Francis said. 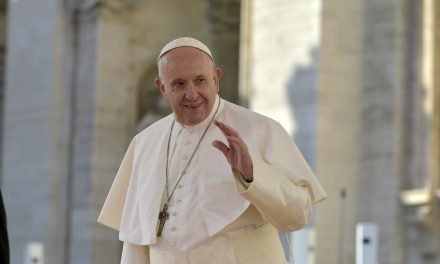 Pope Francis to sign a new encyclical on human fraternity on Oct. 3 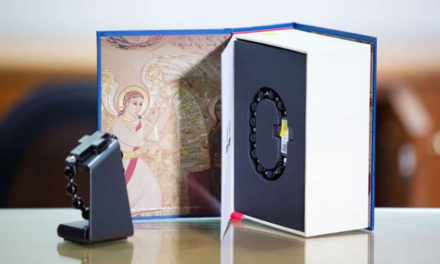 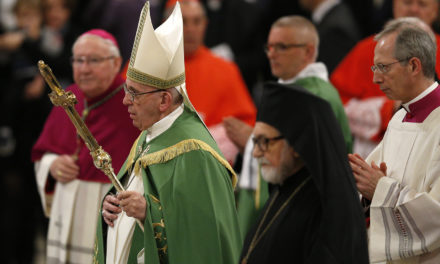 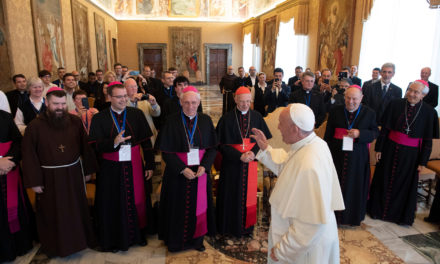