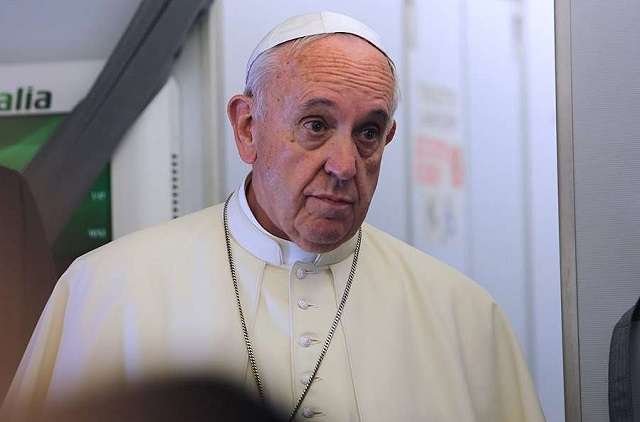 Pope Francis on the papal flight from Rome, Italy to Quito, Ecuador on July 5, 2015. ALAN HOLDREN/CNA

VATICAN— Pope Francis said Friday that when it comes to solving the immigration crisis, the media need to stop perpetuating negative stereotypes and start explaining the big picture, shedding light on the causes behind migration.

“The mass media should be driven by the need to explain the different aspects of migration, also making the public aware of the causes of this phenomenon,” he said in an interview published April 7.

“The violation of human rights, the violent conflict in the social unrest, lack of basic necessities, natural disasters and those caused by man: all this must be told clearly to allow the right knowledge of the migration phenomenon and, therefore, the right approach.”

The Pope’s comments were made in a new interview with the Italian magazine, LibertàCivili, published every two months by the Italian Ministry for Internal Affairs.

In the interview, Francis slammed those in media who perpetuate negative stereotypes about migrants and refugees, especially when based on misinformation.

“How many times do you hear them speak of ‘illegal’ as a synonym for migrant. This is incorrect; it is information that starts from an incorrect basis and that pushes the public to develop a negative opinion,” he said.

This points to the media’s obsession with sensationalism and negative stories which grab the public’s attention, he said. We always hear about any bad thing that an immigrant or refugee does, but it’s a “rare piece of news” that focuses on the good stories about them.

Good information is the kind that can “break down the walls of fear and indifference,” he continued. Only when the media, through images and stories, presents the human aspect, can we move beyond the stereotypes and the fear, and really encounter and welcome other people.

For Christians, “the peaceful integration of people of different cultures” is a reflection of the Church’s catholicity, or universality, since “ethnic and cultural diversity is a dimension of the Church’s life, which in the Spirit of Pentecost is open to everyone,” he said.

If handled humanely, migration offers an opportunity for encounter and growth for everyone, Francis continued.

“We must not lose the sense of fraternal responsibility. The defense of human beings knows no barriers; we are all united in wanting to ensure a dignified life for every man, woman, child forced to abandon their land. There is no difference of belief that can stand against this will, indeed.”

Europe and other parts of the world at a “critical juncture” when it comes to migration and the management of migration policies, the Pope said. Leaders need “foresight and cohesion” as well as a “vigilant respect for fundamental human rights” to create policies that end the causes of forced migration.

Repeating what he often says about these policies, the Pope emphasized that there must be international cooperation on the issue that respects both the country welcoming and those being welcomed, and that those coming to the new country respect the laws, customs and traditions of the nation they now reside in.

Likewise, European and other countries should remember how they have also experienced both immigration and emigration “the hard way.”

“How difficult was it after the war for millions of Europeans who left often with the whole family and crossed the ocean to land in South America or the United States!” he said.

“It was not an easy experience even for them. They suffered the burden of being regarded as strangers, they came from far away and without any knowledge of the local language. It was not an easy integration process.”

On January 1st of this year, Pope Francis formed a new Migrants and Refugees Section under the new Dicastery for the Promotion of Integral Human Development. He did this, he said, because “the millions of migrants, refugees, displaced persons and victims of trafficking need special care.”

Reflecting the strong emphasis he’s placed on this issue of migration throughout his pontificate, Francis has put himself in charge of this section, “at least for a time,” he said.

“The main mission of the Section is to support the Church and pastors – locally, regionally and internationally – in accompanying people at every stage of the migration process,” he said.

The Pope said that he thinks especially of people fleeing conflict, persecution, natural or man-made disasters, as well as trafficked-persons and those in exploitative situations, particularly migrant workers, women, adolescents, and children.

As in the past, migrants are an “enrichment for our society,” he said. “We have much to learn from the past; it is important to act with awareness, without stirring up fear of foreigners.” 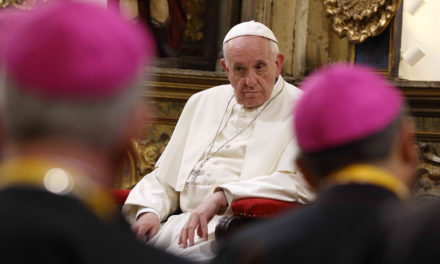 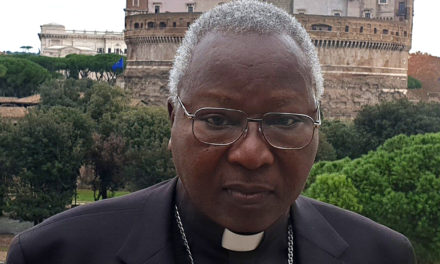 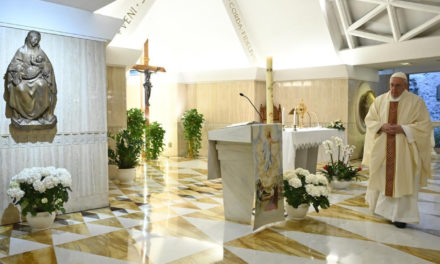