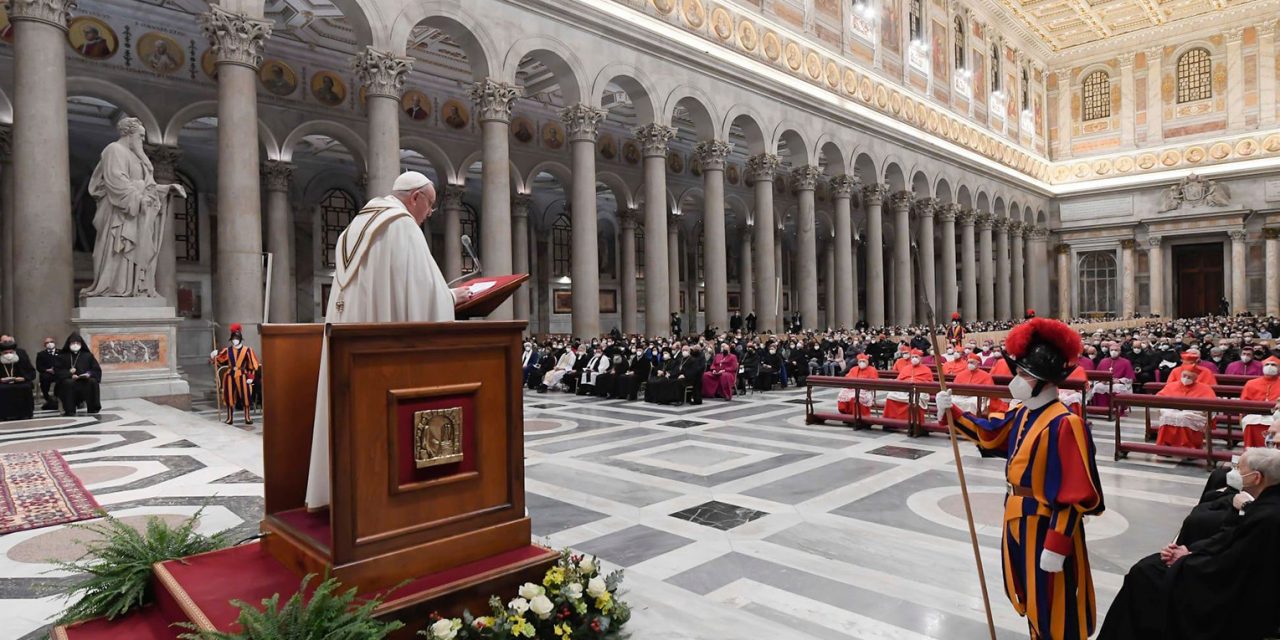 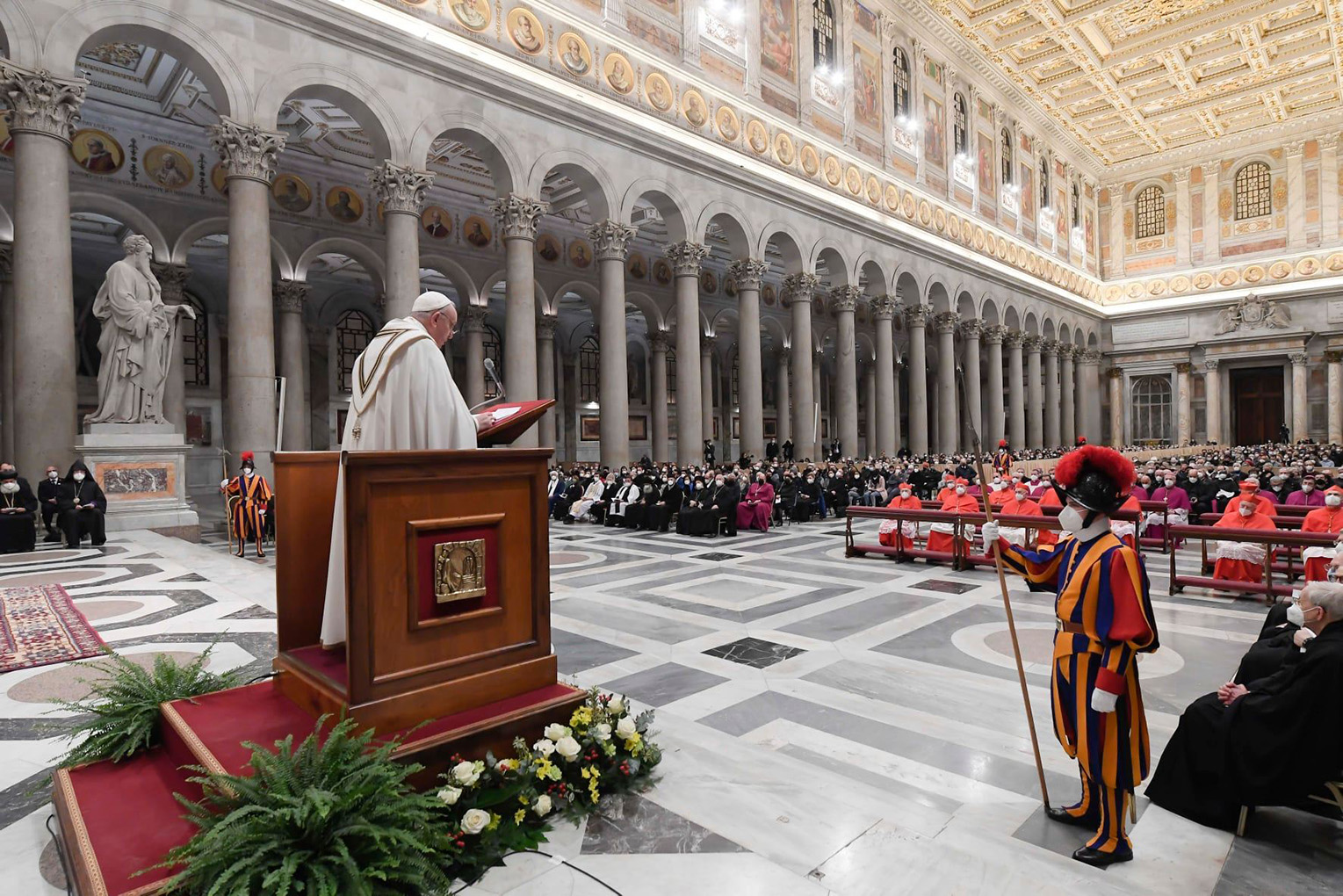 Pope Francis presides at the celebration of Second Vespers of the Solemnity of the Conversion of St. Paul at Rome’s Basilica of St. Paul Outside-the-Walls, Jan. 25, 2021. VATICAN MEDIA

VATICAN— Pope Francis said on Tuesday that God wants Christians to trust one another, “despite the errors of the past and our mutual wounds,” as he marked the end of the Week of Prayer for Christian Unity.

The pope was preaching on Jan. 25 in Rome’s Basilica of St. Paul Outside-the-Walls, which contains the tomb of St. Paul the Apostle, in the presence of Orthodox and Anglican leaders.

“Let us not fear to put our brothers and sisters ahead of our own fears! The Lord wants us to trust one another and to journey together, despite our failings and our sins, despite the errors of the past and our mutual wounds.”

The live-streamed ceremony fell on the last day of the 55th Week of Prayer for Christian Unity, dedicated to the theme “We saw a star in the East, and we came to worship him,” inspired by Matthew 2:2.

At the start of the service, the Second Vespers of the Solemnity of the Conversion of St. Paul, the pope venerated the saint’s tomb, with Metropolitan Polykarpos, representing the Ecumenical Patriarchate of Constantinople, and Archbishop Ian Ernest, the Archbishop of Canterbury’s personal representative to the Holy See and director of the Anglican Centre in Rome.

Pope Francis began his homily by thanking the two men for their presence. He also greeted students from the Ecumenical Institute of Bossey in Switzerland and Anglican students from Nashotah, Wisconsin.

He reflected on the example of the Magi — also known as the Three Wise Men or Three Kings — who came with gifts to worship the Child Jesus shortly after his birth.

“Dear brothers and sisters, the decisive stage of the journey towards full communion requires ever more intense prayer, it requires worship, the worship of God,” the pope said.

“The Magi, however, remind us that worship demands something else of us: first, we must fall to our knees. That is the way: bending low, setting aside our own pretenses in order to make the Lord alone the center of everything. How many times has pride proved the real obstacle to communion!”

“The Magi had the courage to leave behind their prestige and reputation in order to humble themselves in the lowly house of Bethlehem; and as a result, they found themselves ‘overwhelmed with joy’ (Matthew 2:10).”

“To humble ourselves, to leave certain things behind, to simplify our lives: this evening, let us ask God for that courage, the courage of humility, the one way to come to worship God in the same house, around the same altar.”

At the end of Vespers, before the Apostolic Blessing, Cardinal Kurt Koch, president of the Pontifical Council for Promoting Christian Unity, addressed the pope.

He referred to Paul Couturier, a French priest who helped to establish the Week of Prayer for Christian Unity.

Koch said: “The ecumenical movement, as Paul Couturier, the great protagonist of spiritual ecumenism, so beautifully put it, is like an invisible monastery where Christians of different Churches in many countries and continents pray together for the unity of the Church.”

“This evening we too participate in this invisible monastery, gathering together with you, Holy Father, to pray and adore the Child in Bethlehem.”

“We thank you most sincerely, Holy Father, for your constant encouragement to tread the path of unity and reconciliation.”

The Swiss cardinal thanked the pope especially for proclaiming St. Irenaeus of Lyon a Doctor of the Church with the title ‘”Doctor unitatis'”.

“Your decision is also a promising sign for ecumenism,” he said. 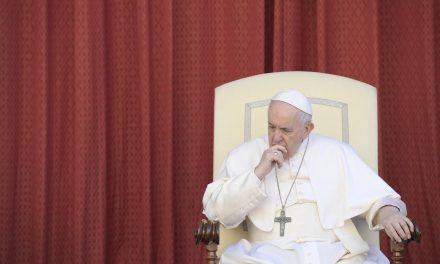 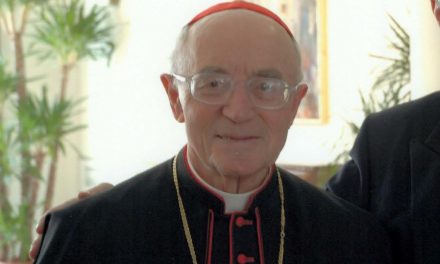 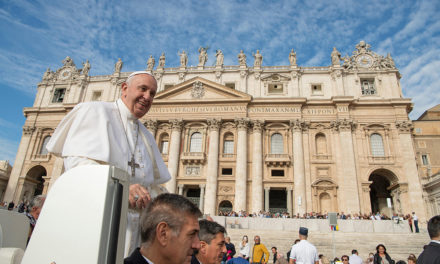 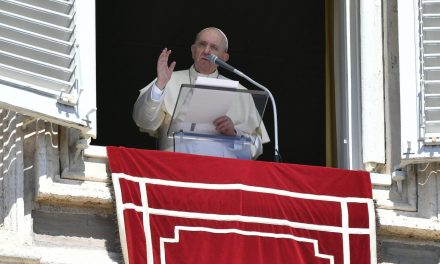 Pope Francis urges Catholics to pray and fast for Afghanistan