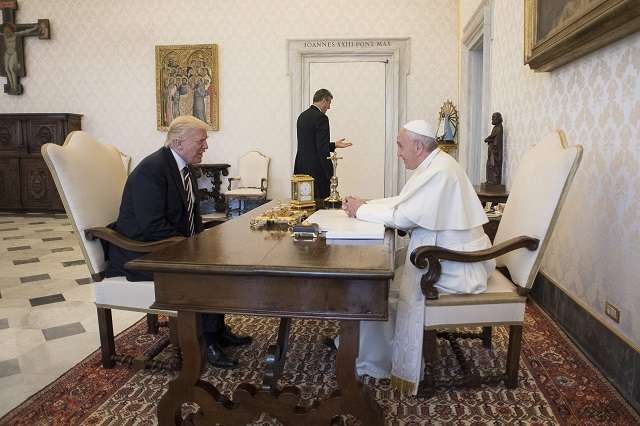 VATICAN— After months of anticipation, Pope Francis and U.S. President Donald Trump finally met at the Vatican Wednesday in a friendly encounter which included an emphasis on protection of life and freedom of conscience.

According to a May 24 Vatican communique, Pope Francis and Trump expressed satisfaction “for the good existing bilateral relations between the Holy See and the United States of America, as well as the joint commitment in favor of life, and freedom of worship and conscience.”

The Pope and Trump met at the Vatican May 24, at 8:30 a.m., immediately before the weekly general audience in St. Peter’s Square.

Trump arrived to Italy May 23 after stopping in both Saudi Arabia and Israel as part of his first international trip. He is also set to attend a NATO meeting in Brussels on May 25 and a G7 summit in Sicily on May 26 before returning to the U.S.

President Trump arrived to the Vatican via the side entrance by Casa Santa Marta around 8:15 a.m. and was greeted by a group of Swiss Guards in the San Damaso courtyard. After stepping out of the car, Trump and First Lady Melania greeted Archbishop Georg Ganswein and other Vatican dignitaries before entering the Apostolic Palace.

Pope Francis and Trump smiled as they sat down at the Pope’s desk in the papal library. Pope Francis said, “Welcome!” and Trump responded, “Thank you very much, this is such a great honor.”

Smiling, Francis explained that he doesn’t speak English well and needs a translator, but added that he was “very happy to meet” Trump.

After the cameras left, the two began the private portion of their conversation, which lasted about 30 minutes. In addition to Pope Francis and Trump, only the Pope’s English translator, Msgr. Mark Miles, was present.

During the “cordial discussions,” the two expressed hope for peaceful collaboration between the government and the Catholic Church in the United States, that it may be “engaged in service to the people in the fields of healthcare, education and assistance to immigrants,” a Vatican communique on the meeting said.

Pope Francis and President Trump also exchanged views “on various themes relating to international affairs, the promotion of peace in the world through political negotiation and interreligious dialogue, with particular reference to the situation in the Middle East and the protection of Christian communities.”

After their formal conversation, gifts were exchanged between Francis and Trump. There were 12 people in the president’s entourage, including his wife Melania and his daughter and son-in-law, Ivanka Trump and Jared Kushner, both of whom are advisors in his administration.

Also present for the meeting with Pope Francis were U.S. Secretary of State Rex Tillerson, Assistant to the President for National Security Affairs H.R. McMaster, and Louis Bono, American Chargé d’Affaires ad interim to the Holy See until Calista Gingrich us officially approved as ambassador.

Pope Francis gave Trump a copy of his environmental encyclical Laudato Si, as well as copies of his 2015 Apostolic Exhortation on the family “Amoris Laetitia” and his 2013 exhortation “Evangelii Gaudium.”

In addition to the customary gift of these three documents, Francis also gave President Trump a copy of his message for the 2017 World Day of Peace, saying: “I signed it personally for you.” Trump responded that he would be reading them.

The Pope also gifted the U.S. president with a medallion he said symbolized peace and unity, which, after the translator explained in English, he added in Spanish: “Have it so that you become an instrument of peace.” In response, Trump said that “we can use peace.”

On his part, President Trump gifted Pope Francis a set of books by Martin Luther King, Jr., saying: “I think you’ll enjoy them, I hope you do.”

Members of the delegation each received a medal and a rosary from the pontiff. When greeting Francis, First Lady Melania told him that she would afterward be visiting the hospital. Joking, the Pope asked her if they had given her potica, a traditional Slovenian dessert, to eat, to which she responded, “yes, potica,” as they both laughed.

Departing with a handshake, Trump said to Francis: “Thank you, thank you, I won’t forget what you said.”

After meeting with Pope Francis, Trump met with Vatican Secretary of State Cardinal Pietro Parolin and Secretary for Relations with States Archbishop Paul Richard Gallagher, as is customary for heads of state.

After the meeting, First Lady Melania paid a visit to the Vatican-owned Pediatric hospital Bambino Gesu, also known as the “Pope’s hospital.”

Bambino Gesu sits next to the Pontifical North American College on top of Rome’s Gianicolo hill, and is among the most important pediatric hospitals in the world. Founded in 1869 by the Duchess Arabella Salviati, the hospital was donated to Pius XI in 1924, with the aim of giving it a more stable future.

At the same time, Trump’s daughter and high-profile adviser, Ivanka, made her way to the Roman neighborhood of Trastevere to meet with the Community of Sant’Egidio to discuss efforts to oppose human trafficking.

The Sant’Egidio Community is often praised by Pope Francis for their work with the poor and refugees, in particular.

Ivanka is participating in each of the seven days of Trump’s first trip abroad as president, and was also present for the public portion of his meeting with Francis.

Before leaving with her father on his first international tour, Ivanka hosted an anti-human trafficking roundtable discussion at the White House May 17.

During her meeting with Sant’Egidio, she is expected to meet with several women who are victims of trafficking, and discuss various ways in which the Church and the U.S. government can collaborate on the issue. 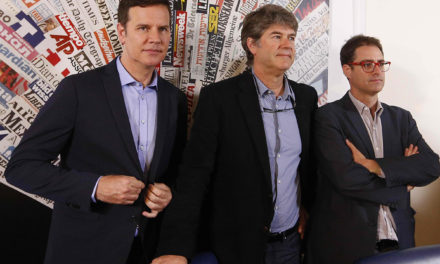 Pope to meet with second group of abuse survivors from Chile 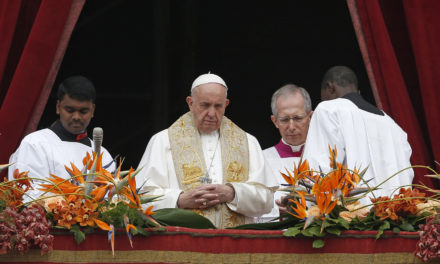