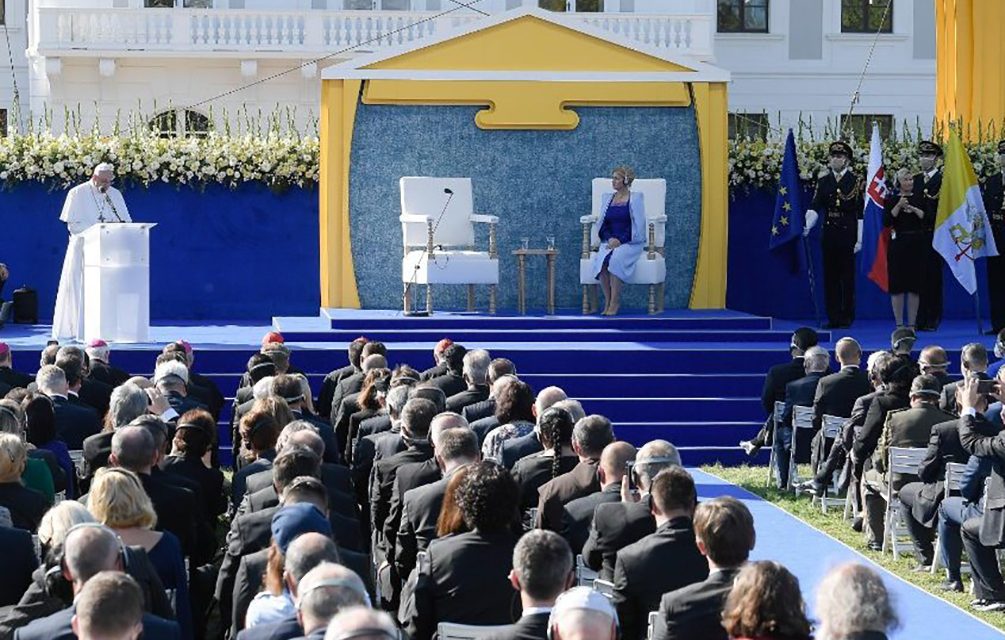 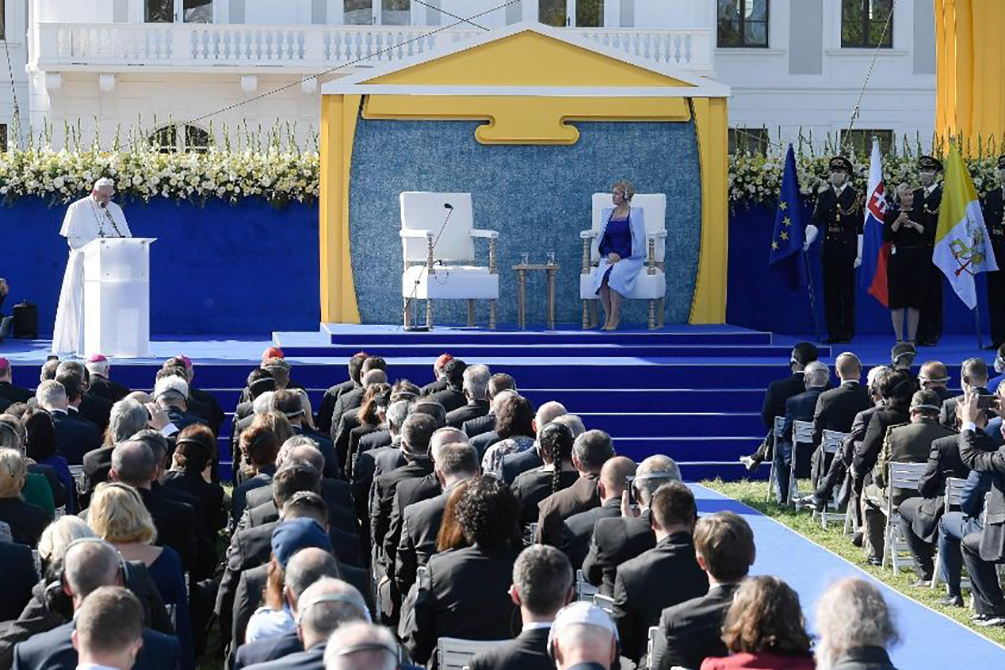 Pope Francis meets with authorities, civil society, and the diplomatic corps in the garden of the Presidential Palace in Bratislava, Slovakia, Sept. 13, 2021. VATICAN MEDIA

BRATISLAVA, Slovakia— Pope Francis told political authorities in Slovakia on Monday to “follow the road of the Beatitudes” to build a just, peaceful, and fraternal society.

“Your constitution expresses the desire that the country be built on the legacy of Saints Cyril and Methodius, Patrons of Europe,” Francis said on Sept. 13.

Cyril and Methodius proposed the Gospel “without impositions or pressure,” he continued, underlining that “this is the path to follow: not the battle for influence and position, but the road pointed out by the saints, the road of the Beatitudes.”

“For the Beatitudes,” he said, “are the inspiration for a Christian vision of society.”

The meeting took place on the morning of his first full day in the central European country, after he visited Budapest, in neighboring Hungary, on Sept. 12, where he celebrated the closing Mass of the 52nd International Congress and met with Hungarian Prime Minister Viktor Orbán.

The pope will also visit the Slovakian cities of Prešov, Košice, and Šaštín before returning to Rome on Sept. 15.

In his meeting with authorities, which followed a private visit with Slovakia’s President Zuzana Čaputová, Francis referred to the country’s experience under communism and warned his audience about other ideologies threatening the country.

He urged the Slovakian people to be the salt of the earth, saying that “the salt of the faith acts not by reacting in worldly terms, by engaging in culture wars, but by quietly and humbly sowing the seeds of God’s kingdom, especially by the witness of charity.”

“I have come as a pilgrim to a young country, yet one with an ancient history, a land of deep roots situated in the heart of Europe,” Francis said.

He outlined the history of Slovakia as “an outpost of the Roman Empire and a point of encounter between Western and Eastern Christianity. From Great Moravia to the Kingdom of Hungary, from the Czechoslovak Republic to the present day.”

Slovakia has “overcome numerous trials and attained integration and distinctiveness through a fundamentally peaceful process,” he noted, adding that “28 years ago, the world followed with admiration the peaceful emergence of two independent countries.”

Pope Francis said that “this long history challenges Slovakia to be a message of peace in the heart of Europe.”

He again recalled the example of the ninth-century saints Cyril and Methodius, who brought the Christian faith to the Slavs, explaining that the brothers “showed that preserving what is good does not mean repeating the past, but being open to newness without ever losing one’s roots.”

“Your history abounds in writers, poets and men and women of culture who were the salt of the country. Just as salt burns when placed on wounds, so their lives often had to pass through the crucible of suffering,” the pope said.

“How many illustrious men and women endured imprisonment, yet remained interiorly free, offering a radiant example of courage, integrity, and resistance to injustice! And most of all, forgiveness. That is the salt of your earth.”

As Slovakia looks forward to a better economic period after the COVID-19 pandemic with the help of European Union recovery plans, the pope urged the authorities to not succumb to impatience and the “lure of profit.”

Economic recovery itself is not sufficient, he said. “Even as battles for supremacy are waged on various fronts, may this country reaffirm its message of integration and peace. And may Europe be distinguished by a solidarity that, by transcending borders, can bring it back to the center of history.”

The pope concluded his speech with a reflection on Slavic hospitality and the custom of giving guests bread and salt.

“Bread is something essential. Scripture commands us not to hoard our bread, but to share it. The bread spoken of in the Gospel is always bread that is broken. This sends a powerful message for our life as a community: it reminds us that true wealth does not consist simply in multiplying the things we have, but in sharing them fairly with those around us,” he said.

He urged the authorities to build a society in which laws are applied fairly, the rule of law promoted, and corruption fought.

The pope also noted the importance of everyone having dignified employment, “so that none will feel marginalized or constrained to leave family and homeland in search of a better life.”

Using the imagery of salt and the flavor it gives to food, Francis said that society needed “the flavor of solidarity.”

“Just as salt gives flavor only by dissolving, so too society rediscovers its flavor through the gratuitous generosity of those who spend their lives for others,” he said. 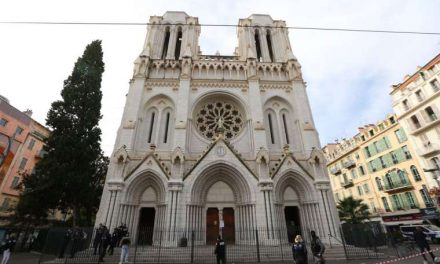 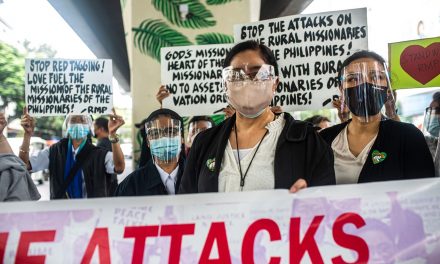 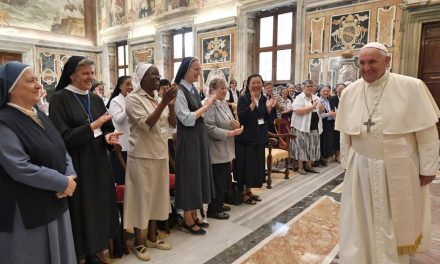