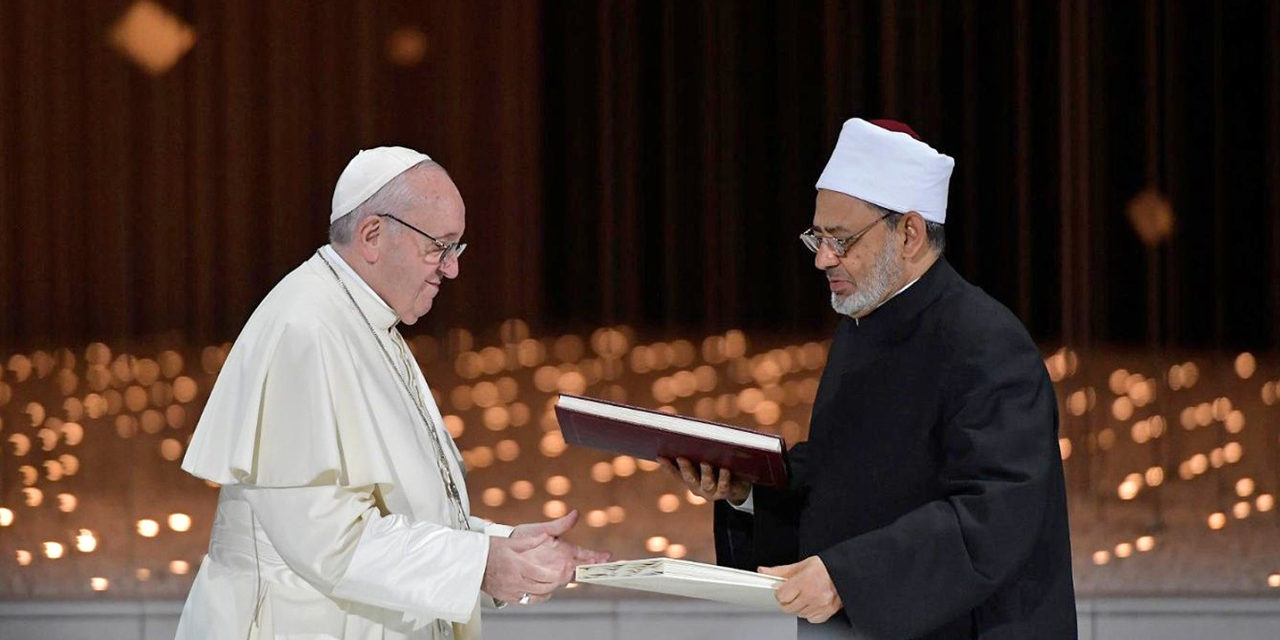 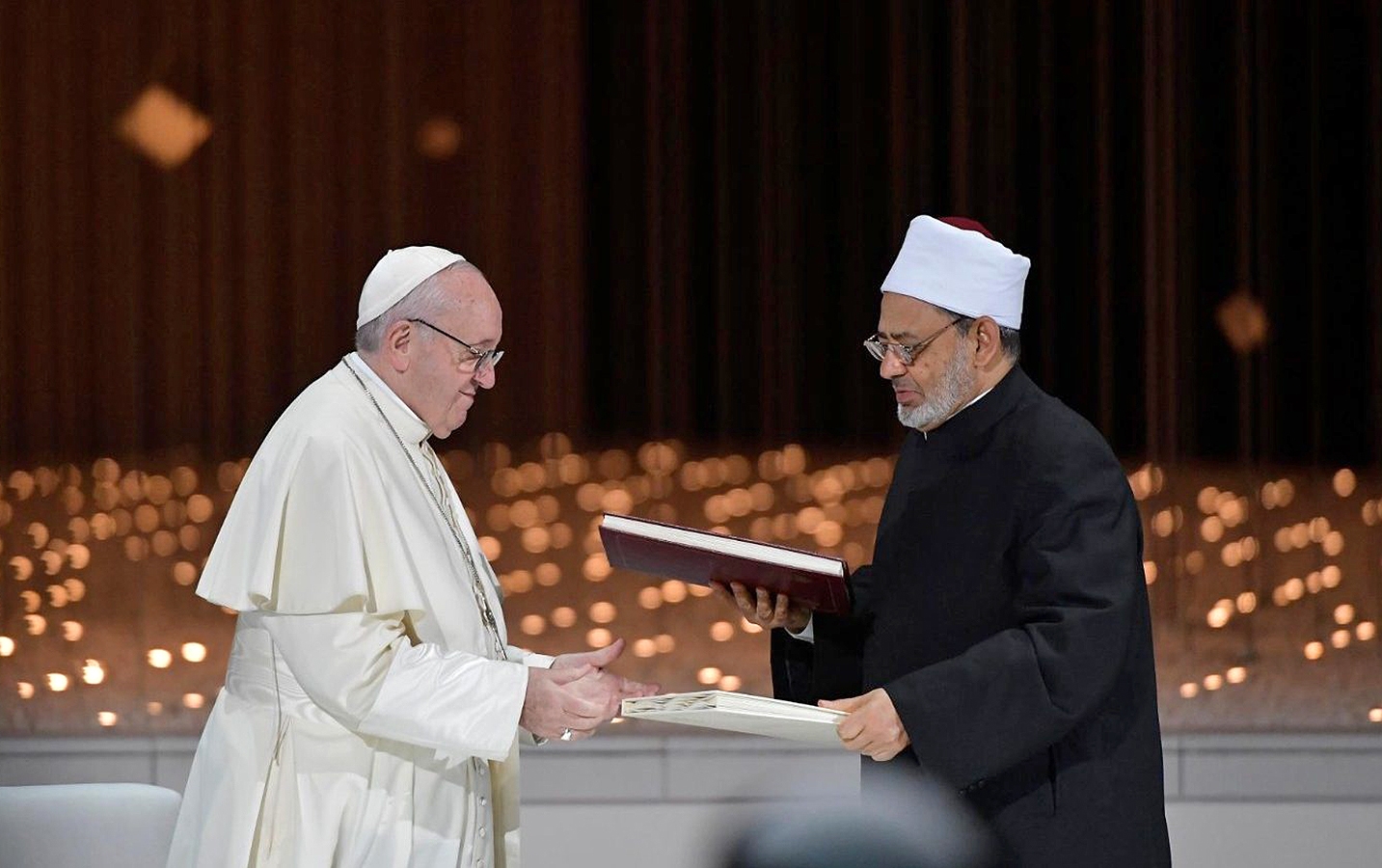 Pope Francis and Grand Imam Ahmed el-Tayeb at the signing of the Document on Human Fraternity, Feb. 4, 2019. VATICAN MEDIA

VATICAN— Pope Francis said Wednesday that his recent trip to Abu Dhabi in the United Arab Emirates was a step forward in Catholic-Muslim dialogue and promoting peace among religions.

Though a brief visit, the “scattered seeds” of the Feb. 3-5 trip will bear fruit according to God’s will, he said during the general audience Feb. 6.

The visit to the UAE, and second meeting with the Muslim Grand Imam of al-Azhar, “wrote a new page in the history of dialogue between Christianity and Islam and in the commitment to promote peace in the world on the basis of human brotherhood.”

In the document, “we condemn all forms of violence, especially those with religious motivation, and we commit ourselves to spreading authentic values and peace throughout the world,” the pope stated.

In this era, he said, when there is strong a temptation to discord between Christian and Islamic cultures, and considering religions as sources of conflict, “we wanted to give a further, clear and decisive sign, that instead it is possible to meet, it is possible to respect and dialogue.”

He added that he recommends people read the document and try to understand it, because it has helpful points for how to carry out a dialogue on human fraternity.

“Despite the diversity of cultures and traditions, the Christian and Islamic world appreciate and protect common values: life, family, religious sense, honor for the elderly, the education of young people, and still other things,” he said.

Francis’ trip to the UAE, the first of a pope to the Arabian Peninsula, also fell 800 years after St. Francis of Assisi visited the Sultan Malik al Kamil in Egypt. Pope Francis said it was “Providence” that a pope named Francis made the historic trip on the 800th anniversary of the saint’s visit.

“I often thought of Saint Francis during this journey: he helped me to keep the Gospel, the love of Jesus Christ in my heart, while I was living the various moments of the visit,” he said.

“In my heart there was the Gospel of Christ,” he said, “the prayer to the Father for all his children, especially for the poorest, for the victims of injustice, wars, misery; prayer because the dialogue between Christianity and Islam is a decisive factor for peace in today’s world.”

During the audience, Francis also recalled his meetings with two 90-year-old priests who have both served in the UAE for many years. One, he said, is now blind and in a wheelchair, but a smile never left his lips. “The smile of having served the Lord and done very good.”

Another highlight of the trip, he pointed out, was the Mass he celebrated in the stadium in Abu Dhabi Feb. 5, which was attended by around 150,000 people. “There were so many people!” he said. “We prayed in a special way for peace and justice, with special intention for the Middle East and Yemen.” 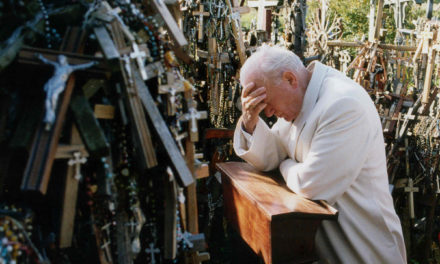 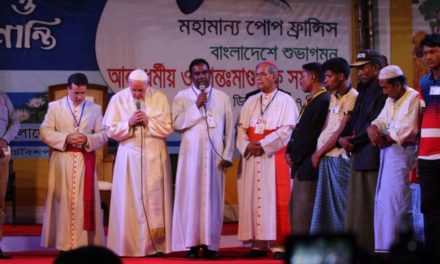 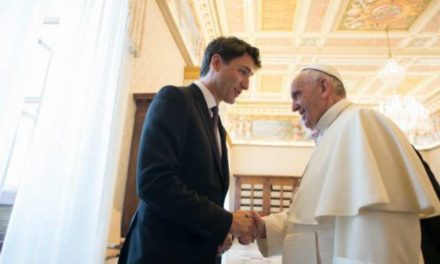 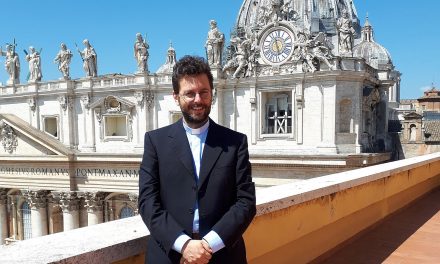