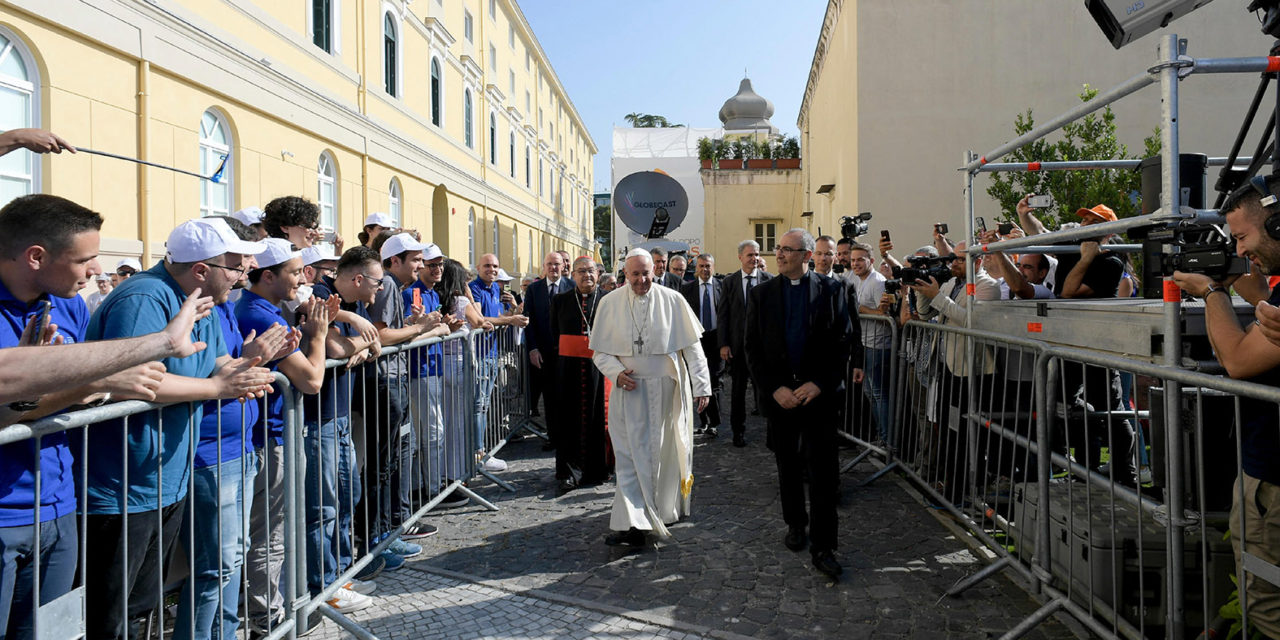 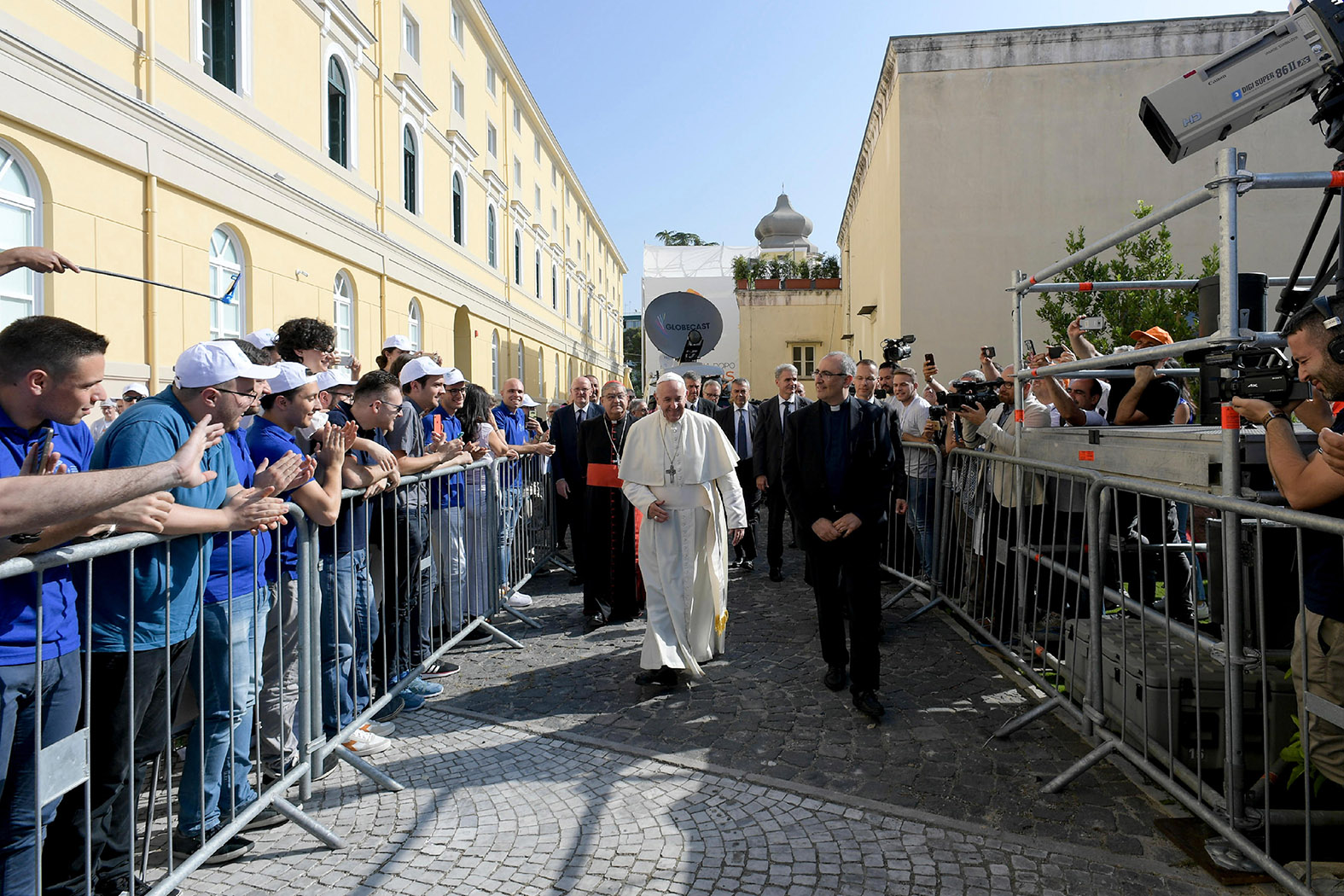 Pope Francis arrives at the Pontifical Theological Faculty of Southern Italy in Naples for a conference on theology and the Mediterranean June 21, 2019. CNS/VATICAN MEDIA

VATICAN— Theology develops through dialogue, not an aggressive defense of doctrine that seeks to impose its beliefs on others, Pope Francis said.

Like Charles de Foucauld and the slain Trappist monks of Tibhirine in Algeria, fidelity to the Gospel “implies a style of life and of proclamation without a spirit of conquest, without a desire to proselytize and without an aggressive intent to refute,” the pope said June 21 in a speech at the Pontifical Theological Faculty of Southern Italy in Naples.

He also cited the writings of the Rev. Martin Luther King Jr. and Italian philosopher Lanza del Vasto as examples of nonviolent teaching and warned that opposing sides in theological debates may be prone to the “Babel syndrome.”

The pope traveled to Naples to deliver the closing address at a two-day conference on the theme “Theology after ‘Veritatis Gaudium’ in the context of the Mediterranean.”

In his apostolic constitution “Veritatis Gaudium” (“The Joy of Truth”), the pope issued revised norms for what are known as “ecclesiastical universities and faculties” — those that grant Vatican-recognized degrees, which are necessary for teaching most philosophy, theology and canon law courses in seminaries and pontifical universities.

The document also called for a “thoughtful and prophetic” renewal of theological education “as part of the new phase of the church’s mission, marked by witness to the joy born of encountering Jesus and proclaiming his Gospel.”

In his talk in Naples, Pope Francis said a more “welcoming theology” is fostered through dialogue, particularly with Judaism and Islam, in order “to understand the common roots and the differences of our religious identity and thus contribute efficaciously to the building of a society that appreciates diversity and promotes respect, brotherhood and peaceful coexistence.”

Departing from his prepared remarks, the pope highlighted the importance of engaging in dialogue and recalled a game he and his companions would play during his seminary days studying theology in which they would “prove” every theological position using the same syllogism:

“I studied in the time of crumbling theology, of crumbling scholasticism, a time of manuals. And among ourselves we would joke around and would prove theological theses with this pattern, a syllogism,” he said. “It was the kind of theology that was defensive apologetics closed in a manual. We joked around but it was how things were presented to us in the time of scholasticism in decline.”

Rather than recite formulas by rote, he said, theologians must be “men and women of compassion” who are touched by the social ills of war, violence, slavery and forced migration and who are nourished by prayer.

When theologians lack communion, compassion and prayer, the pope added, “theology not only loses its soul, but loses its intelligence and its ability to interpret reality in a Christian way.”

“Without compassion drawn from the heart of Christ, theologians risk being swallowed up in the condition of privilege of those who prudently place themselves outside the world and share nothing of risk with the majority of humanity,” he said.

Mercy, the pope said, is not solely a pastoral attitude but the backbone of the Gospel message and it must be a focal point in theological studies. Theology must be “an expression of a church that is a field hospital that lives out its mission of salvation and healing in the world.”

“Without mercy, our theology, our law, our pastoral work, run the risk of collapsing into bureaucratic pettiness or ideology, which by its very nature wants to tame the mystery,” Pope Francis said. “Theology, through the path of mercy, defends itself from taming the mystery.” 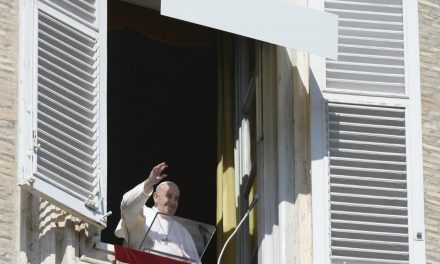 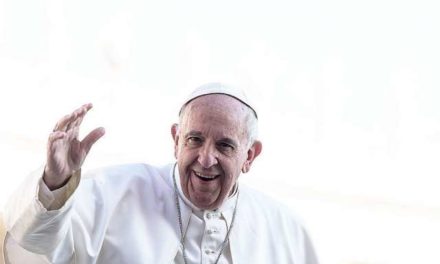 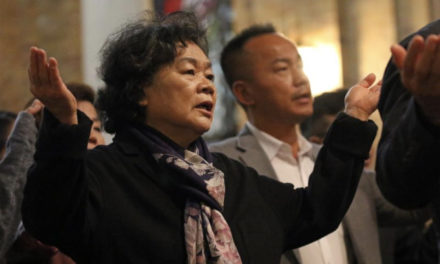