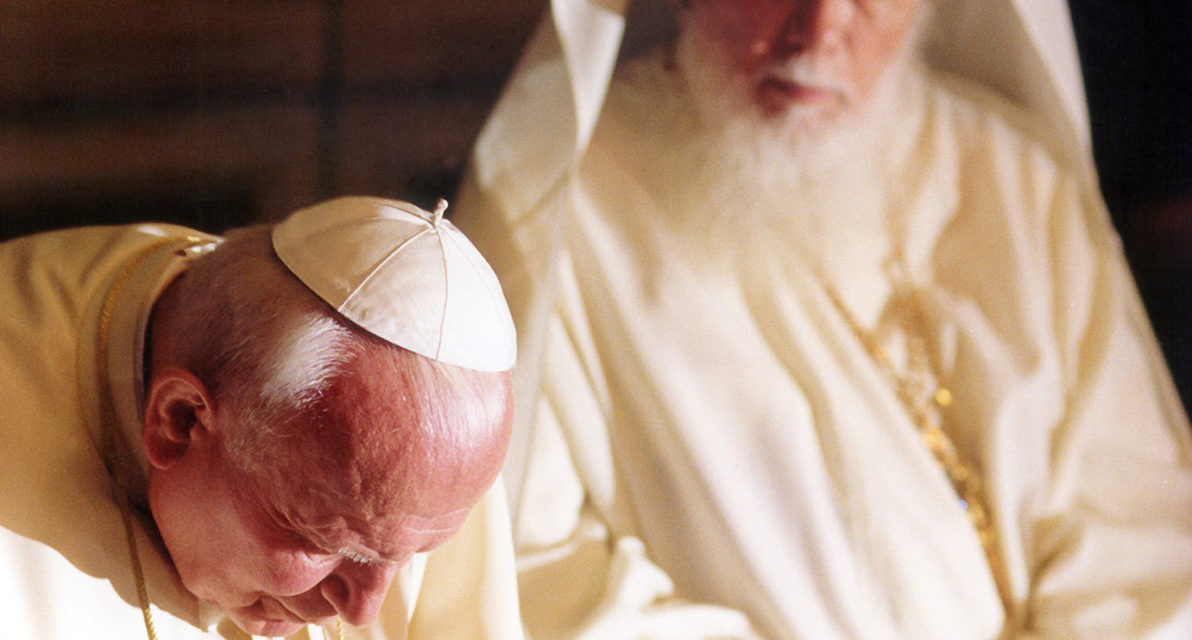 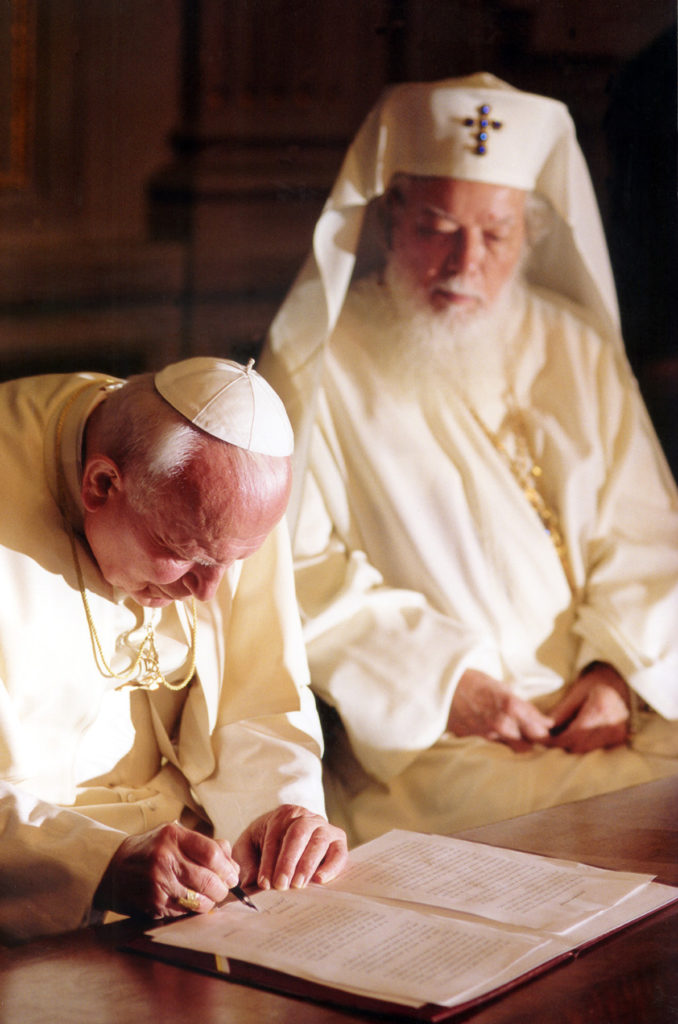 Pope John Paul II and Romanian Orthodox Patriarch Teoctist sign a joint appeal for brotherhood and coexistence in the Balkans, in Bucharest, Romania, in May 1999. The trip was a significant step toward improved relations between the Orthodox majority and the Catholic minority in Romania. CNS/L’OSSERVATORE ROMANO

VATICAN— When Pope Francis makes his 30th international trip, visiting Romania in late May, he is likely to receive a different, more reserved welcome than St. John Paul II did 20 years ago, said an expert in Catholic-Orthodox relations.

“I’m delighted that Pope Francis is able to follow in (St. John Paul II’s) footsteps and make a similar visit. It remains to be seen how well he will be received. It’s hard to predict, but we have good reason to believe that it will be a very important meeting,” Paulist Father Ronald Roberson, associate director of the U.S. bishops’ Secretariat of Ecumenical and Interreligious Affairs, told Catholic News Service May 10.

St. John Paul’s visit to Romania in 1999 was the first by a reigning pontiff to a predominantly Orthodox country since the Great Schism of 1054 and marked a turning point in Catholic-Orthodox relations.

One of the most poignant moments of the aging pontiff’s visit came while he was celebrating an outdoor Mass on the final day of his visit to Bucharest.

“I remember the people’s cry at the eucharistic celebration in Podul Izvor Park: ‘Unity, unity!’ This is the spiritual yearning of a people asking for unity and willing to work to obtain it,” St. John Paul told Romanian bishops visiting the Vatican in 2001.

Father Roberson told CNS that St. John Paul’s visit “was very well received” and a “very encouraging” moment of dialogue between the Catholic and Orthodox churches.

Father Roberson, who studied in Romania for several years, said when Pope Francis visits the country May 31-June 2, he will see a Romania that has improved remarkably since the time of St. John Paul’s visit only 10 years after the fall of the country’s harsh communist regime.

“I was in Romania a couple of summers working on Romanian language courses in the days of communism and it was such an oppressive society; it was really palpable,” the Paulist said. But “I was there about a year ago for a meeting and I was able to see Bucharest and some of the other cities and it’s been a huge improvement in their situation.”

Relations between the Catholic and Orthodox churches today, however, face new, challenging hurdles since the days St. John Paul heard those cries for unity 20 years ago.

The overwhelming majority — almost 82 percent — of Romania’s 20 million inhabitants say they belong to the Romanian Orthodox Church. About 6 percent of the population identifies itself as Protestant and over 4 percent identify as Catholic, belonging either to the Romanian Greek Catholic Church — an Eastern rite — or to the Latin-rite church.

One of the first issues that came up after the Romanian Revolution of 1989 regarded the restitution of property taken from the Eastern-rite Catholic Church after its members were forced underground following the church’s dissolution by the communist government in 1948.

“The issues about property have mostly died down and there is not as much bad will about that as there used to be,” Father Roberson said.

Nevertheless, relations between Catholics and Orthodox in Romania “have gotten a little more intense recently,” he said.

As in many other Orthodox countries, he said, Romania is experiencing a “resurgence of a conservative wing of the church, which is really opposed to all ecumenical activity and they are very strongly opposed, for example, to Orthodox praying with Catholics.”

While the voices of those who oppose relations between the Catholic and Orthodox churches must “be taken into account,” Father Roberson said that Romanian Orthodox Patriarch Daniel may be able to open a path of dialogue between the churches.

“When he was a layman, (Patriarch Daniel) taught for many years at the World Council of Churches’ Ecumenical Institute in Bossey near Geneva. So, he had that experience — a very rich experience — and I would hope that he would be open to more ecumenical relations perhaps as a result of that,” Father Roberson said.

With communism in the country gone for decades, he added, Pope Francis’ visit and his meeting with Patriarch Daniel, scheduled for May 31, could improve relations “in a spirit of freedom.”

“I think they have to take into account their own constituencies and their peoples and their own needs, and so on,” Father Roberson told CNS. “Hopefully, we can make some very positive steps forward.” 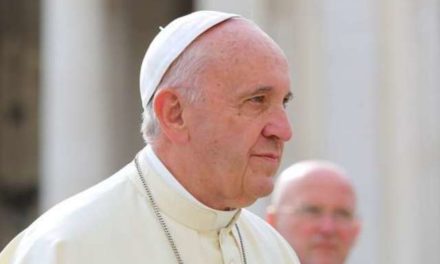 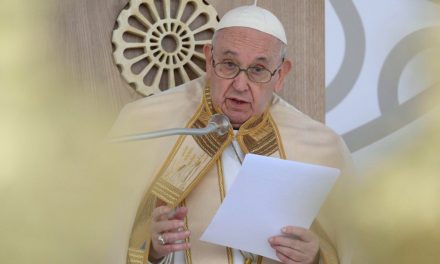 Pope Francis appeals for the release of kidnapped Catholics in Cameroon 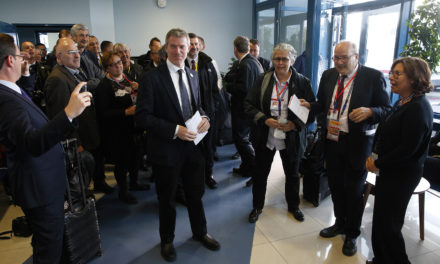 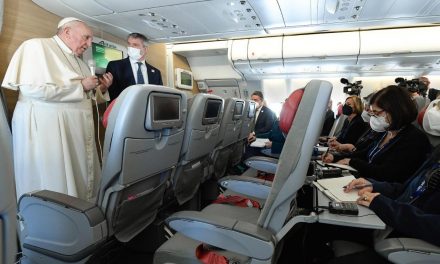