Portland, Ore., Feb 9, 2017–A week after Hispanic Catholics experienced racial harassment and taunts from a group of men during a Spanish Mass, the local community in Portland, Oregon sprang into action to show their support for the churchgoers.

Despite the chill and the rain, an estimated 200-300 people created a human barrier on Sunday, Feb. 5, protecting parishioners of St. Peter Catholic Church from possible harassment.

It was a different scene than what had greeted parishioners the week before, when a group of about eight men dressed as hunters shouted racial and sexual slurs at parishioners during Spanish Mass, and taunted the congregation for being made up of many immigrants, according to the Catholic Sentinel. The group of men was nowhere to be seen the following week.

The harassment came at an already tense time for the parish because of new federal immigration policy proposals. Pastor Fr. Raul Marquez, a native of Colombia who has been pastor at St. Peter’s for 5 years, said he had never seen anything like it.

“All that Sunday I felt upset and didn’t understand,” he told the Sentinel.

But the next Sunday came as a pleasant surprise. News of the previous attacks had spread on social media through two videos of the incident, and local community members banded together, with one post reading: “ATTN WHITE PEOPLE – USE YOUR WHITE BODY TO INTERRUPT RACISM!”  It urged people to place themselves “between violent bigots and people of color” to form a “strong human chain to stand as a buffer between Latino worshippers and those who hate them.”

And it worked. Catholics, Christians and non-believers showed up in force to provide support, complete with welcoming signs in both English and Spanish and a table of coffee and sweets.

Local priest Father Ron Millican from nearby Our Lady of Sorrows parish and Rev. Elizabeth Larson from St Mark Lutheran Church came to show their support for Fr. Marquez, as well as Matt Cato, director of the Archdiocese of Portland’s Office of Life, Justice and Peace.

Archbishop Alexander Sample expressed his support to St. Peter’s through a letter to the parish, saying that he was saddened by the harassment and offering his prayers for healing.

“Please be assured that I, as your Archbishop and shepherd, stand firmly with you in the face of such ignorant and hateful words. You are our brothers and sisters, and as members of the same family of faith, we must hold fast to our unity in Christ,” he said.

He added that the incident was not isolated and that the same group had been harassing other churches in the area. The men were reportedly part of a Portland-based group called “Bible Believers”—hard-right street preachers who appear at protests against President Donald Trump.

“Be assured of my love and prayers for all of you. May Our Lady embrace you all in her mantle of love and protection,” Archbishop Sample concluded.

Brenda Ramirez, a 21 year-old parishioner, told the Portland Tribune that she was shocked to hear about the attack at her church, but was happy with the large showing of support from the local community. 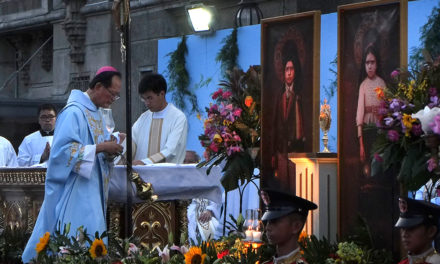 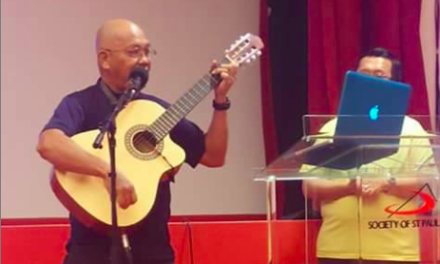 Group marks ‘Year of the Parish’ with lecture series