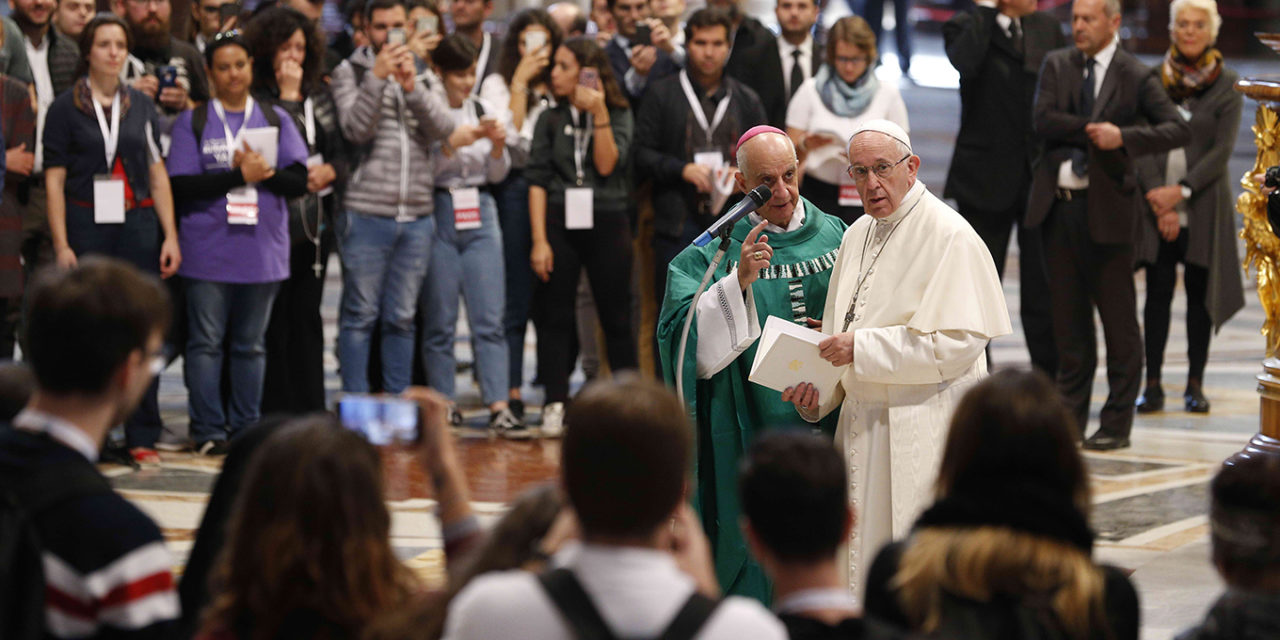 Pope Francis prepares to address young people who participated in a pilgrimage hike from the Monte Mario nature reserve in Rome to St. Peter’s Basilica at the Vatican Oct. 25. Participants in the Synod of Bishops on young people, the faith and vocational discernment, and young people from Rome parishes took part in the hike. Pictured next to the pope is Archbishop Rino Fisichella, president of the Pontifical Council for Promoting New Evangelization. PAUL HARING/CNS

VATICAN— The Catholic Church and all its members must get better at listening to young people, taking their questions seriously, recognizing them as full members of the church, patiently walking with them and offering guidance as they discern the best way to live their faith, the Synod of Bishops said.

While the synod’s final document spoke of friendship, affection, sexuality and “sexual inclinations,” those issues were not the center of concern in the lengthy final document, which was released Oct. 27.

The synod, which began Oct. 3 and was to conclude with a Mass Oct. 28, brought together 267 voting members — cardinals, bishops, 18 priests and two religious brothers — and 72 experts and observers, including three dozen men and women under 30 to discuss “young people, the faith and vocational discernment.”

For the vote on the final document, 249 bishops and priests participated; two-thirds approval or 166 votes, were required to keep a paragraph in the document. The version they voted on had 167 numbered paragraphs.

The focus of the final document was on improving ways to support young Catholics’ baptismal call to holiness, to welcome the contributions they make to the church and help them in their process of growing in faith and in deciding the state of life that would best correspond to what God wants from them.

“Listening is an encounter in freedom, which requires humility, patience, willingness to understand and a commitment to working out responses in a new way,” the document said. “Listening transforms the heart of those who live it, above all when they take on an inner attitude of harmony and docility to the Spirit of Christ.”

The bishops said they heard from many young people a need for “courageous cultural conversion and a change in daily pastoral practice” to promote the equality of women in society and in the church.

“An area of particular importance in this regard is the presence of women in church bodies at all levels, including in leadership roles, and the participation of women in church decision-making processes while respecting the role of the ordained ministry,” the document said. “This is a duty of justice.”

However, the final document was amended before passage to remove one specific suggestion on where to begin promoting greater equality in the church. The draft document had called for “avoiding the disparity” at the synod between the men’s Union of Superiors General, which has 10 voting members at the synod, and the women’s International Union of Superiors General, which had three non-voting observers at the assembly.

The document acknowledged how, in some countries, young people are moving away from the church or question its teachings, especially on sexuality.

The church’s response, the synod said, must be a commitment of time and patience as it helps young people “grasp the relationship between their adherence to faith in Jesus Christ and the way they live their affectivity and interpersonal relationships.”

Church teaching that all people are called to chastity and to refraining from sexual relations outside the bond of marriage between a man and a woman must be presented clearly, but not with a judgmental attitude, it added.

The document mentioned young people’s questions about homosexuality, sexual orientation and differences between men and women and called for “a more in-depth anthropological, theological and pastoral elaboration” on the church’s position on those issues. The final document used the term “sexual inclination” rather than “sexual orientation” as the draft document had.

“The synod reaffirms that God loves every person and so does the church, renewing its commitment against all sexually-based discrimination and violence,” the final document said. “It also reaffirms the decisive anthropological relevance of the difference and reciprocity between man and woman and considers it reductive to define the identity of persons solely on the basis of their ‘sexual orientation.'”

The paragraph, listed under “Sexuality: A Clear, Liberating, Authentic Word,” passed by the required two-thirds, but received the fewest favorable votes — 178 — while 65 bishops voted against it.

Members of the synod also praised young Catholics who are involved in their parishes or communities, who dedicate themselves enthusiastically to service projects, who offer their time and talent to the celebration of parish liturgies and who are willing to do even more. However, the document said, too often young volunteers are met by priests and other adults who doubt their commitment or preparation or are simply unwilling to share responsibility with them.

While young people can feel overlooked or ignored, the synod members said such attitudes are detrimental to the church and to its missionary mandate. The final document said young people challenge the church to be better and their questions force older church members to find clearer ways to express church teaching or to respond to new situations with the wisdom of faith.

“Their criticism, too, is needed because not infrequently we hear through them the voice of the Lord asking us for a conversion of heart and a renewal of structures,” the synod members said.

The clerical sex abuse scandal and financial scandals in the Catholic Church are leading many people, not only young people, away from the faith, the synod acknowledged.

Apparently responding to some bishops who felt the draft document’s section on abuse gave too much prominence to the topic’s importance in the United States, Ireland, Australia and Chile, the final document treated it in three paragraphs rather than the earlier five.

However, the final document, like the draft, said, “The Synod expresses gratitude to those who have had the courage to denounce the evil they have suffered: they help the church become aware of what has happened and of the need to react decisively” to ensure abuse does not continue to occur.

Behind the crime of abuse, it said, there lies a “spiritual void” and a form of exercising power that led some priests to believe their ordination gave them “power” over others rather than called them to serving others.

On “vocation,” synod members emphasized how the basic, common Christian vocation is the call to holiness, which can and should be lived out in every state of life: young or old, single or married or in the priesthood or religious life.

“Vocation is neither a script a human being is called to recite, nor a spontaneous theatrical moment leaving no traces,” the document said. God calls each person into a relationship with him, respects the person’s freedom and yet has a plan for each person’s life; discovering that plan requires prayer and self-examination.

The final document urged particular attention to marriage preparation programs as “a kind of ‘initiation’ for the sacrament of matrimony” and to careful selection of candidates for the priesthood and to seminary programs to ensure that future priests are men who can recognize the gifts of others, relate well to women and men of all ages and are devoted to serving the poor.

Young people who are poor or experience discrimination — especially migrants, victims of religious persecution and those struggling to find employment — received special attention at the synod and in the final document.

In fact, the synod said, “the world of young people is also deeply marked by the experience of vulnerability, disability, illness and pain” and Catholic communities have not always done everything possible to welcome and assist them. 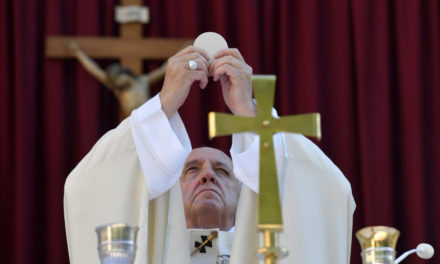