The Alleluia before the Gospel 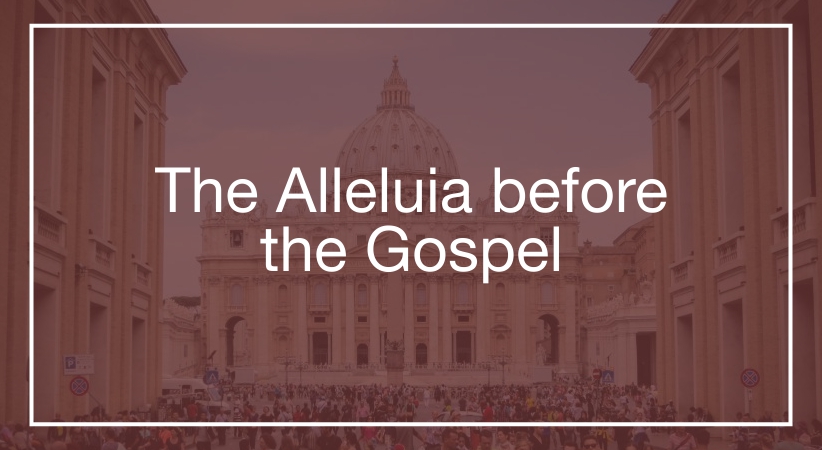 (Father Edward McNamara, professor of liturgy and dean of theology at the Regina Apostolorum university, answers the following query:)

Q: In a follow-up to a 2007 article concerning the Alleluia and Versum ante Evangelium, you commented that “the Church’s intention is that whenever possible the Alleluia or other seasonal acclamation should always be sung.” Now, Musicam Sacram, in Nos. 28-31, outlines the grades of Misa cantata. No. 29 says that only the first grade may be used by itself, where the second and third can only be used if together with the first. Lastly, this same document, in paragraph 31, ranks the Alleluia in the third grade. My question would be whether, in a Mass without music (such as the ordinary weekday Mass in most parishes), it is proper to sing the Alleluia, according to current liturgical law? – A.L., Miami, Florida

A: This question gives us an opportunity to explain how some norms evolve by later documents overriding earlier norms without abrogating the fundamental document. The instruction Musicam Sacram was promulgated on March 5, 1967, and remains substantially in force as the most complete document on music in the liturgy since the Second Vatican Council. It remains a valid reference point for its articulation of the principles of liturgical music and the overall vision that it contains.

For example the following general norms would still be applicable:

“5. Liturgical worship is given a more noble form when it is celebrated in song, with the ministers of each degree fulfilling their ministry and the people participating in it. Indeed, through this form, prayer is expressed in a more attractive way, the mystery of the liturgy, with its hierarchical and community nature, is more openly shown, the unity of hearts is more profoundly achieved by the union of voices, minds are more easily raised to heavenly things by the beauty of the sacred rites, and the whole celebration more clearly prefigures that heavenly liturgy which is enacted in the holy city of Jerusalem.

“Pastors of souls will therefore do all they can to achieve this form of celebration. They will try to work out how that assignment of different parts to be performed and duties to be fulfilled, which characterizes sung celebrations, may be transferred even to celebrations which are not sung, but at which the people are present. Above all one must take particular care that the necessary ministers are obtained and that these are suitable, and that the active participation of the people is encouraged. The practical preparation for each liturgical celebration should be done in a spirit of cooperation by all parties concerned, under the guidance of the rector of the church, whether it be in ritual, pastoral or musical maters.

“6. The proper arrangement of a liturgical celebration requires the due assignment and performance of certain functions, by which ‘each person, minister or layman, should carry out all and only those parts which pertain to his office by the nature of the rite and the norms of the liturgy.’ This also demands that the meaning and proper nature of each part and of each song be carefully observed. To attain this, those parts especially should be sung which by their very nature require to be sung, using the kind and form of music which is proper to their character.

“7. Between the solemn, fuller form of liturgical celebration, in which everything that demands singing is in fact sung, and the simplest form, in which singing is not used, there can be various degrees according to the greater or lesser place allotted to singing. However, in selecting the parts which are to be sung, one should start with those that are by their nature of greater importance, and especially those which are to be sung by the priest or by the ministers, with the people replying, or those which are to be sung by the priest and people together. The other parts may be gradually added according as they are proper to the people alone or to the choir alone.

“8. Whenever, for a liturgical service which is to be celebrated in sung form, one can make a choice between various people, it is desirable that those who are known to be more proficient in singing be given preference; this is especially the case in more solemn liturgical celebrations and in those which either require more difficult singing, or are transmitted by radio or television. If, however, a choice of this kind cannot be made, and the priest or minister does not possess a voice suitable for the proper execution of the singing, he can render without singing one or more of the more difficult parts which concern him, reciting them in a loud and distinct voice. However, this must not be done merely for the convenience of the priest or minister.

“9. In selecting the kind of sacred music to be used, whether it be for the choir or for the people, the capacities of those who are to sing the music must be taken into account. No kind of sacred music is prohibited from liturgical actions by the Church as long as it corresponds to the spirit of the liturgical celebration itself and the nature of its individual parts, and does not hinder the active participation of the people.

“10. In order that the faithful may actively participate more willingly and with greater benefit, it is fitting that the format of the celebration and the degree of participation in it should be varied as much as possible, according to the solemnity of the day and the nature of the congregation present.

Notwithstanding this, several concrete norms contained in the document were rendered obsolete by the subsequent publication of the missal and lectionary in 1970, their subsequent editions, and by other liturgical books.

This, for example, happened to some of the elements of No. 31 mentioned by our reader. To wit:

“31. The following belong to the third degree: (a) the songs at the Entrance and Communion processions; (b) the songs after the Lesson or Epistle; (c) the Alleluia before the Gospel; (d) the song at the Offertory; (e) the readings of Sacred Scripture, unless it seems more suitable to proclaim them without singing.”

With the publication of the new missal and lectionary, the “song after the lesson (b)” practically disappeared and was replaced by the responsorial psalm. In 1967 the “Alleluia before the Gospel” referred above all to the complex Gregorian chant Alleluias. These are among the most beautiful Gregorian melodies, yet they require proficient singers to express the fine nuances that fuse together text and melody. There were also classic polyphonic versions of some of these texts also requiring a trained choir. It was precisely this complexity that placed the Alleluia in the third degree.

Once more the new lectionary, while often maintaining the same text, allowed for a much simpler execution and presented it more as an acclamation of the assembly rather than a choral piece. Thus it says in the introduction to the second edition 1981:

“23. The Alleluia or, as the liturgical season requires, the verse before the Gospel is also a ‘rite or act standing by itself.’ It serves as the greeting of welcome of the assembled faithful to the Lord who is about to speak to them and as an expression of their faith through song. The Alleluia or the verse before the Gospel must be sung, and during it all stand. It is not to be sung only by the cantor who intones it or by the choir, but by the whole of the people together.”

The translation in other languages is not so stringent and allows for the possibility of the Alleluia to be recited rather than sung or simply omitted. However the translators of the U.S. edition received approval for the stricter translation.

In the 2000 introduction to the “Book of the Gospels” singing the Alleluia by all is once more presumed:

“11. The faithful stand to welcome and acclaim the Word made flesh and to honor the Book of the Gospels, which is a sign of his presence. All sing the Gospel Acclamation which ends when the deacon reaches the ambo.”

Finally, the latest English translation of the Roman Missal issued in 2011 gives a more detailed description of the rite:

“The Acclamation before the Gospel

“62. After the reading that immediately precedes the Gospel, the Alleluia or another chant laid down by the rubrics is sung, as the liturgical time requires. An acclamation of this kind constitutes a rite or act in itself, by which the gathering of the faithful welcomes and greets the Lord who is about to speak to them in the Gospel and profess their faith by means of the chant. It is sung by everybody, standing, and is led by the choir or a cantor, being repeated as the case requires. The verse, on the other hand, is sung either by the choir or by a cantor.

“a) The Alleluia is sung in every time of year other than Lent. The verses are taken from the Lectionary or the Graduale.

“b) During Lent, instead of the Alleluia, the Verse before the Gospel as given in the Lectionary is sung. It is also possible to sing another Psalm or Tract, as found in the Graduale.

“63. When there is only one reading before the Gospel:

“a) during a time of year when the Alleluia is prescribed, either an Alleluia Psalm or the Responsorial Psalm followed by the Alleluia with its verse may be used;

“b) during a time of year when the Alleluia is not foreseen, either the Psalm and the Verse before the Gospel or the Psalm alone may be used;

“c) the Alleluia or the Verse before the Gospel, if not sung, may be omitted.

“64. The Sequence which, except on Easter Sunday and on Pentecost Day, is optional, is sung before the Alleluia.”

Once more the presumption is that it should be sung. However, here the norms no longer repeats the “must be sung” of the lectionary but rather follows the “if not sung, may be omitted” found in other translations. This at least leaves open the possibility of simply reciting the Alleluia or singing the Alleluia and reciting the verse even though it is obvious that singing is always preferred.

The complex Gregorian melodies mentioned above may still be used whenever the assembly is capable of singing them, although this happens mostly in monasteries and seminaries. 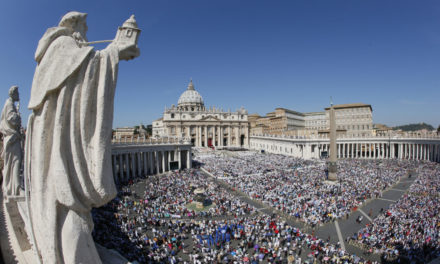 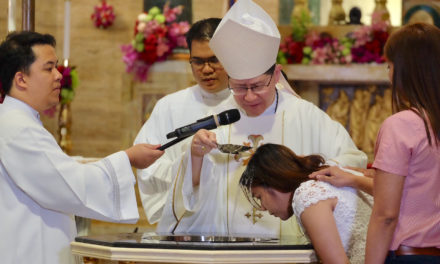 The juridic configuration of baptism (Part I) 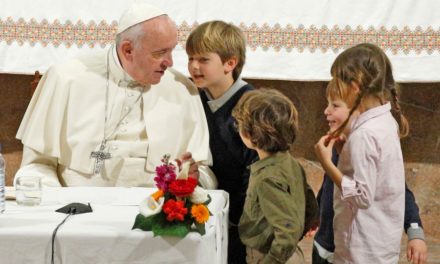 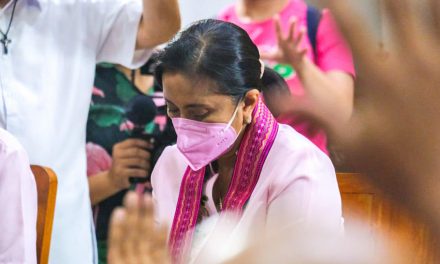