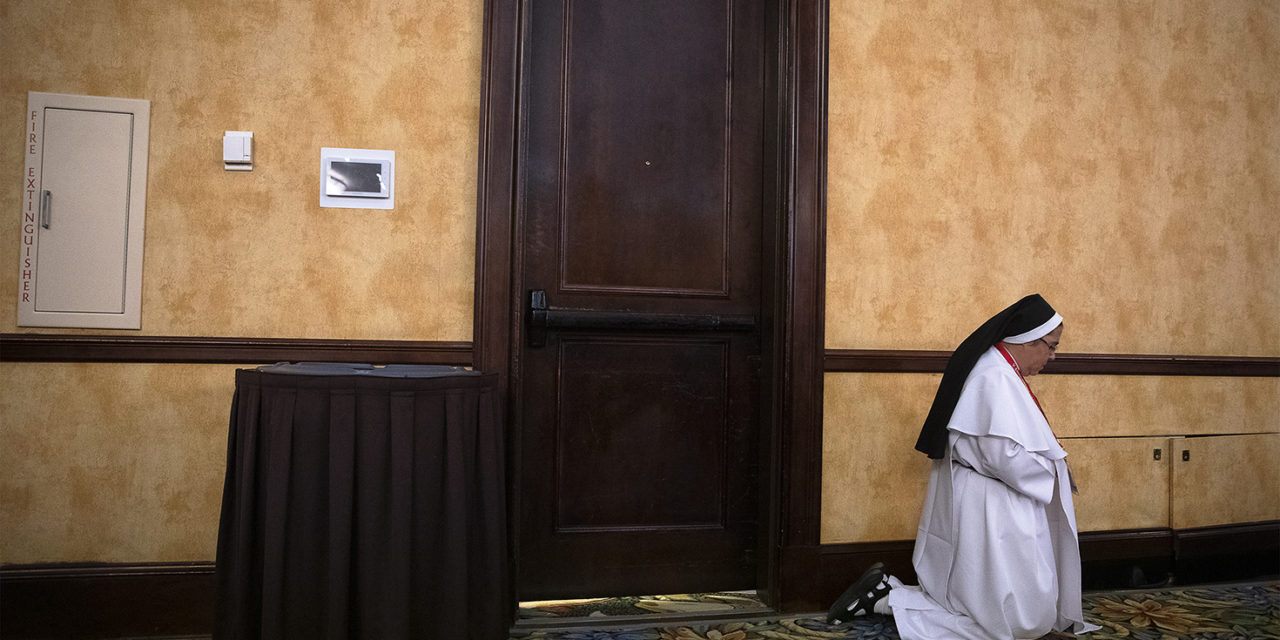 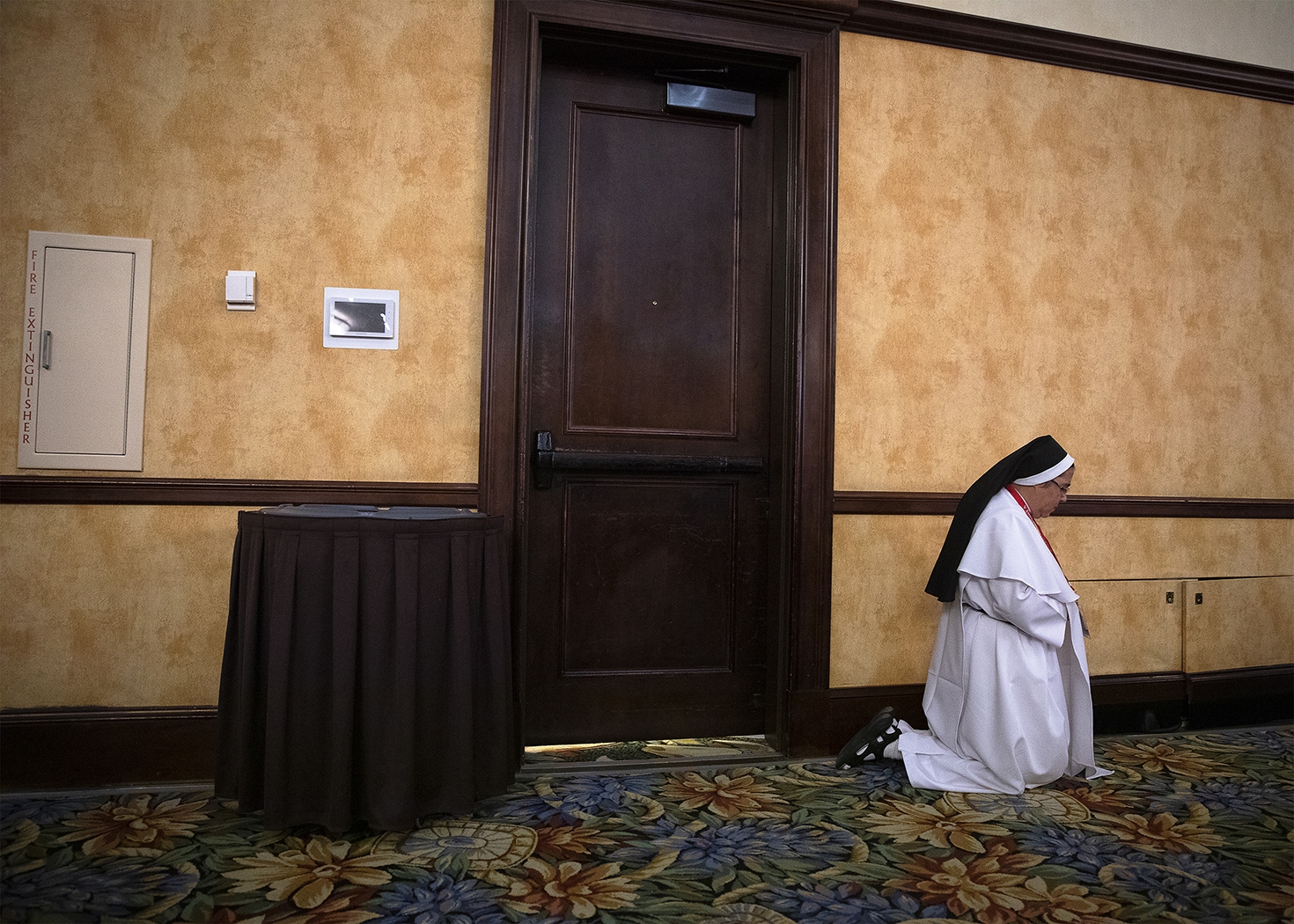 A woman religious prays Sept. 21, 2018, during the Fifth National Encuentro in Grapevine, Texas. The Leadership Conference of Women Religious thanked Pope Francis Feb. 7 for acknowledging abuse of nuns and sisters by priests and bishops. TYLER ORSBURN/CNS

WASHINGTON— Days after the pope acknowledged abuse of nuns and sisters by priests and bishops, the largest U.S. organization of women religious thanked the pontiff for shedding “light on a reality that has been largely hidden from the public,” but the group also called for measures to address the issue.

“We hope that Pope Francis’ acknowledgement is a motivating force for all of us in the Catholic Church to rectify the issue of sexual abuse by clergy thoroughly and swiftly,” said the Leadership Conference of Women Religious in a Feb. 7 statement.

“We acknowledge that, as sisters, we did not always provide environments that encouraged our members to come forward and report their experiences to proper authorities,” the statement said. “We regret that when we did know of instances of abuse, we did not speak out more forcefully for an end to the culture of secrecy and cover-ups within the Catholic Church that have discouraged victims from coming forward.

“Communities of Catholic sisters have worked hard in recent years to have in place what is needed to deal responsibly and compassionately with survivors and will continue to make the protection from abuse of all persons a priority,” it said.

Though most of the incidents appear to have taken place in developing countries, “harassment and rape of sisters have been noted in other countries as well, including in the United States,” the statement said.

The organization expressed hope that the pope’s upcoming summit on sex abuse, slated for Feb. 21-24 at the Vatican, would propose actions to create “mechanisms for the reporting of abuse in an atmosphere where victims are met with compassion and are offered safety” and also “refashion the leadership structures of the church to address the issue of clericalism and ensure that power and authority are shared with members of the laity.”

“The revelations of the extent of abuse indicate clearly that the current structures must change if the church is to regain its moral credibility and have a viable future,” LCWR said.

Honesty, it said, is an important first step.

“Our hope is that this acknowledgement is some comfort for those who have survived abuse and that it hastens the much-needed repair of the systems within the Catholic Church that have allowed abuse to remain unaddressed for years,” LCWR said in its statement.

“Catholic sisters who have been sexually abused by priests have not always reported this crime for the same reasons as other abuse victims: a sense of shame, a tendency to blame themselves, fear they will not be believed, anxiety over possible retaliation, a sense of powerlessness, and other factors,” in continued.

“We hope that, through the pope’s acknowledgement, sisters and other survivors find strength to come forward, and that his words lead to more welcome and receptive avenues of healing.” 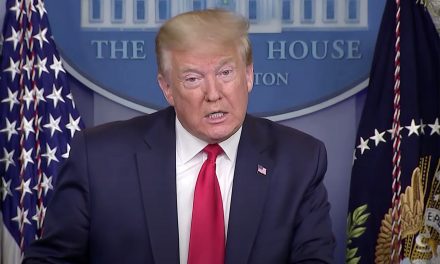 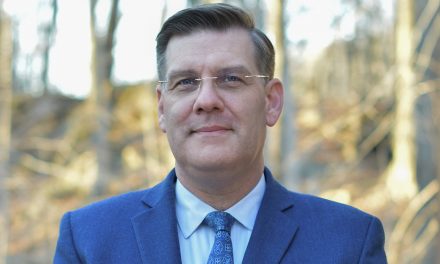 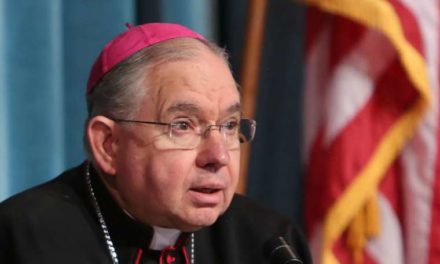 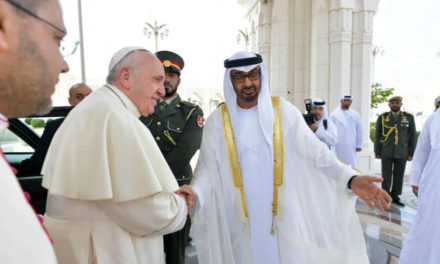