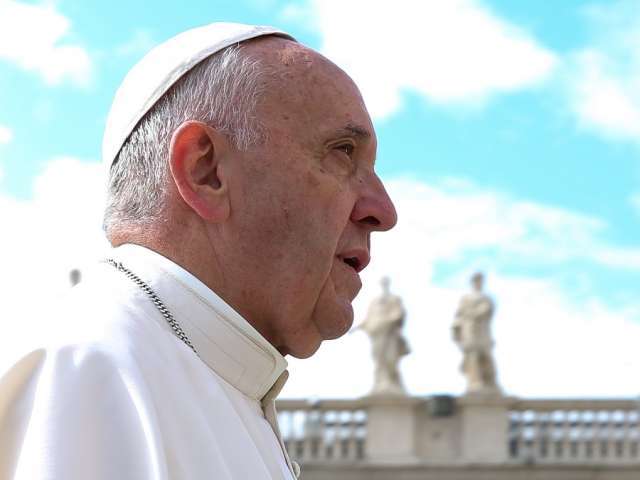 VATICAN— In his message for the next World Day of Migrants and Refugees, Pope Francis outlined a four-step vision for responding to the ongoing global migration crisis, which he said is a “sign of the times” that can’t be solved by simply expelling incoming foreigners, but rather by upholding human dignity.

Pointing to the “lamentable situation” of the many migrants and refugees who flee war, persecution, natural disasters and poverty in their homelands, the Pope said the scenario “is undoubtedly a sign of the times” which he has tried to draw attention to since his election as the Successor of Peter in 2013.

He has consistently spoken out about the issue from the beginning with his July 8, 2013, visit to Lampedusa, up to the formation of the new dicastery for Integral Human Development in January 2017.

“Every stranger who knocks at our door is an opportunity for an encounter with Jesus Christ, who identifies with the welcomed and rejected strangers of every age,” Francis said in his message, released Aug. 21.

The Church in particular is asked to show solidarity with those who leave their countries in search of a better life, he said, stressing that this solidarity “must be concretely expressed at every stage of the migratory experience – from departure through journey to arrival and return.”

Part of this involves a four-step response to the crisis which Pope Francis said can be summed up with four verbs: “to welcome, to protect, to promote and to integrate.”

“Collective and arbitrary expulsions of migrants and refugees are not suitable solutions, particularly where people are returned to countries which cannot guarantee respect for human dignity and fundamental rights,” he said.

Rather, welcoming foreigners above all means “offering broader options for migrants and refugees to enter destination countries safely and legally.”

In order for this to happen, the Pope said there must be a commitment to “increase and simplify” the process for granting humanitarian visas and reuniting families that have been separated.

He urged a wider global adoption of both private and community sponsorship and humanitarian corridor programs for vulnerable refugees, as well as the issuing of “special temporary visas” for those fleeing conflicts in neighboring countries.

Making the human person the focal point of the issue “obliges us to always prioritize personal safety over national security,” he said, and stressed the importance of ensuring that migrants and asylum seekers be guaranteed both personal safety and access to basic services upon their arrival.

He also spoke out against the detainment of illegal immigrants in detention centers, saying that “for the sake of the fundamental dignity of every human person, we must strive to find alternative solutions to detention for those who enter a country without authorization.”

Dating back to 1914, when it was established under Pope St. Pius X, the World Day of Migrants and Refugees is celebrated annually on Jan. 14. This year, the theme follows the Pope’s action-plan: “Welcoming, protecting, promoting and integrating migrants and refugees.”

His message comes amid heated tensions on the immigration issue in the U.S. in particular, as President Donald Trump has outlined new legislation with sweeping cuts to the number of legal immigrants allowed into the country, as well as the implementation of a merit-based visa system.

The issue was one of the most contentious during Trump’s campaign, and he even sparred with Pope Francis when he threatened to built a wall between the U.S.-Mexico border. So far during his time in office, Trump has promoted the idea of the wall, and has implemented a travel ban on six majority-Muslim countries, from which millions are fleeing due to war and violent conflict.

As it stands, current U.S. law forbids migrants from receiving food stamps, Medicaid and Social Security until they have been in the U.S. for at least five years.

However, in his message Pope Francis in his second point stressed that protecting immigrants means defending “the rights and dignity of migrants and refugees, independent of their legal status.”

“Such protection begins in the country of origin, and consists in offering reliable and verified information before departure, and in providing safety from illegal recruitment practice,” he said.

This entails ensuring migrants have proper council and assistance, the right to access documents of identification at any time, the ability of opening a personal bank account and enough money to live on.

“When duly recognized and valued, the potential and skills of migrants, asylum seekers and refugees are a true resource for the communities that welcome them,” Francis said. “This is why I hope that, in countries of arrival, migrants may be offered freedom of movement, work opportunities, and access to means of communication, out of respect for their dignity.”

For those who decide to return to their homelands, reintegration programs ought to be available, the Pope said, and urged for protection of underage migrants, particularly those who travel alone.

“They must be spared any form of detention related to migratory status, and must be guaranteed regular access to primary and secondary education,” he said, adding that when they come of age, these migrants must be “guaranteed the right to remain” in their host country and continue their studies.

Foster programs for unaccompanied minors ought to be set up, and nationality granted and “duly certified” for all children at birth, he said, adding that the “statelessness” some migrants fall into can be avoided with national legislation that respects “the fundamental principals of international law.”

When it comes to “promoting” the interests of migrants and refugees, Pope Francis said this refers to “a determined effort to ensure that all migrants and refugees – as well as the communities which welcome them – are empowered to achieve their potential as human beings, in all the dimensions which constitute the humanity intended by the Creator.”

This means ensuring freedom of religion, and promoting the personal and professional abilities of migrants, which must be “appropriately recognized and valued.”

Since work is essential to dignity, Francis voiced encouragement for “a determined effort to promote the social and professional inclusion of migrants and refugees,” guaranteeing for all – including those seeking asylum – the opportunity for employment, language classes and “active citizenship,” with enough information provided in their mother tongue to ensure that they are successful.

However, when it comes to minors, the Pope cautioned that their involvement with labor must be properly regulated in order to eliminate and prevent opportunities for exploitation. He also spoke out on the need to help disabled migrants, saying they “must be granted greater assistance and support.”

Francis also called for an increase in international humanitarian assistance for developing countries receiving high numbers of migrants and refugees, and voiced hope that local communities that are vulnerable and financially strapped “will be included among aid beneficiaries.”

His final point, integration, is something the Pope has often brought up in relation to the migrant issue, taking advantage of speaking engagements with large governmental bodies such as the the Council of Europe or foreign diplomats.

In his message, Francis said integration is not “an assimilation that leads migrants to suppress or to forget their own cultural identity,” but rather, he said contact with others “leads to discovering their ‘secret,’ to being open to them in order to welcome their valid aspects and thus contribute to knowing each one better.”

“This is a lengthy process that aims to shape societies and cultures, making them more and more a reflection of the multi-faceted gifts of God to human beings,” he said.

This process, he said, can be accelerated by granting citizenship that is free of financial or linguistic requirements, and by offering special legislation to migrants able to claim long-term residence upon arrival.

Pope Francis also drew attention to the plight of migrants who abandon their own countries only to flee their country of arrival due to a humanitarian crisis. These people, he said, “must be ensured adequate assistance for repatriation and effective reintegration programs in their home countries.”

The Pope closed his message insisting that “the contribution of political communities and civil societies is indispensable, each according to their own responsibilities” in order for a positive outcome to the current migration crisis.

To this end, he pointed to the U.N. Summit held in New York Sept. 16, 2016, in which world leaders gathered to discuss their own action-plan to support migrants and refugees with shared responsibility on a global level.

To execute this responsibility, the participating States committed to drafting and approving two Global Compacts, one for migrants and one for refugees, before the end of 2018.

In light of these ongoing processes, the Pope said the coming months “offer a unique opportunity to advocate and support” his own four point action plan, and invited leaders to “use every occasion to share this message with all political and social actors involved (or who seek to be involved) in the process which will lead to the approval of the two Global Compacts.” 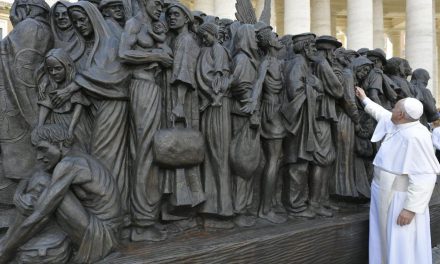 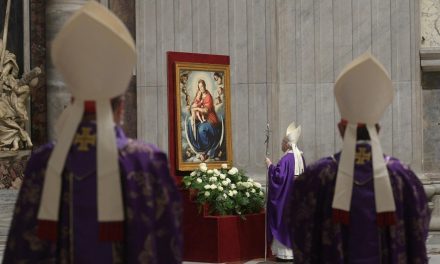 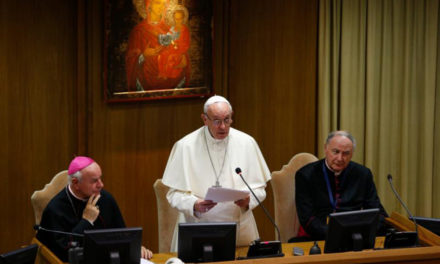 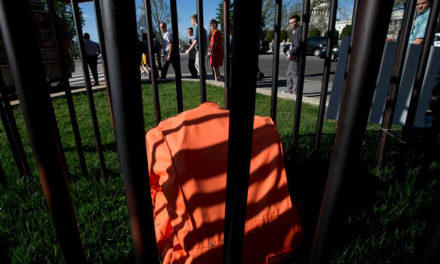 Death penalty is ‘contrary to the Gospel,’ pope says