Speaker Pantaleon Alvarez apparently wants the government to tax the income that Catholic schools are generating from tuition and other fees.   In so doing he has asked the BIR to study how the government can collect taxes from schools run by religious institutions.

Apparently, the Speaker has been irked by the position of certain schools against a proposed bill.

But Finance Sec. Carlos Dominguez III told lawmakers that such as religious schools are exempt from paying taxes. He quoted Art. VI, Sec. 28 of the 1987 Constitution:

“Charitable institutions, churches and convents, mosques, non-profit cemeteries, and all lands, buildings, improvements actually, directly and exclusively used for religious, charitable or educational purposes shall be exempt from taxation.” We thank Finance Sec. Dominguez for pointing this out.

The same article further states: “Subject to conditions prescribed by law, all grants, endowments, donations, or contribution used actually, directly and exclusively for educational purposes shall be exempt from tax” (Art. XIV, Sec. 4).

Revenues of non-stock non-profit schools, as all 1500 members schools of the Catholic Educational Association of the Philippines (CEAP) are, do not go to the pockets of individual investors, but are plowed back to improve the educational operation of the school. The quality of among the best schools in the country is supported by the private students and patrons of the schools.

In the recent Quacquarelli Symonds (QS) Survey, eight Philippine Universities made it to the top 350 in Asia. Of these, one was a State university, another was Protestant-Christian, and six were Catholic universities.

I think it is time to stop bad-mouthing private and Catholic schools for the contribution they are making to Philippine education. Long before the public schools were instituted in the Philippines respectable Catholic schools were operating. Among these were the University of Sto. Tomas (1611), the Ateneo de Manila University (1859) and the Universidad de Sta. Isabel (1867).  They operate first and foremost to provide quality Catholic education to their students.

They have operated primarily on the basis of private funds and private support, even though their contribution to quality education for the country is a common good that government ought fund more.

This is the basis for their tax exemption.

As our Constitution mandates: “The State shall protect and promote the right of all citizens to quality education at all levels and shall take appropriate steps to make such education accessible to all” (Art. XIV, Sec. 1).

“The State shall establish, maintain and support a complete, adequate, and integrated system of education relevant to the needs of the people and society” (Art. XIV, Sec. 2).

Finally, “The State recognizes the complementary roles of public and private institutions in the educational system…”
The non-stock, non-profit Catholic schools are contributing to the Philippine system of quality education for all for which the State is ultimately responsible.

The rationale for their tax exemption is not that they are serving the poor, even though the majority of CEAP’s schools serve the poor directly, but because they are contributing to Philippine Educational System of quality for which the State has ultimate responsibility.

The rationale for tax exemption is not because higher education supports every position that the national leadership may propose, but to support communities of competent thinkers who can take positions critically and contribute to articulating the imperatives of the common good.

For this is not simply a matter of cost. It is a matter of supporting the Philippine Educational System in such manner that the output is of quality. Essential to quality is critical thought. We want our educational communities—public and private—to take their reflected positions on the death penalty, the war on drugs, the peace processes, historical revisionism, the environment, corruption, and on the demands of right and wrong. Otherwise, we do not want education.

I ask the good Speaker to support quality education. 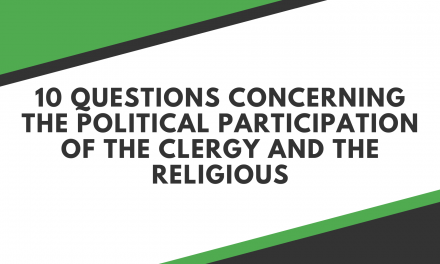 10 questions concerning the political participation of the clergy and religious 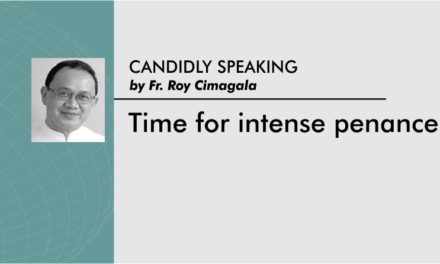