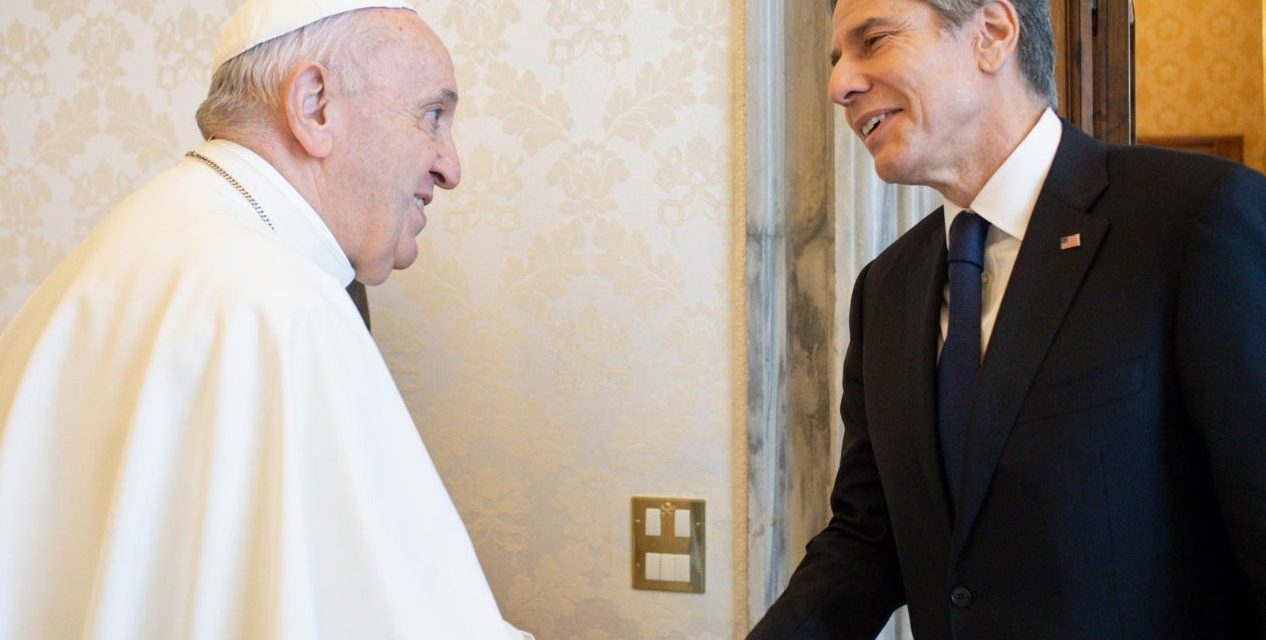 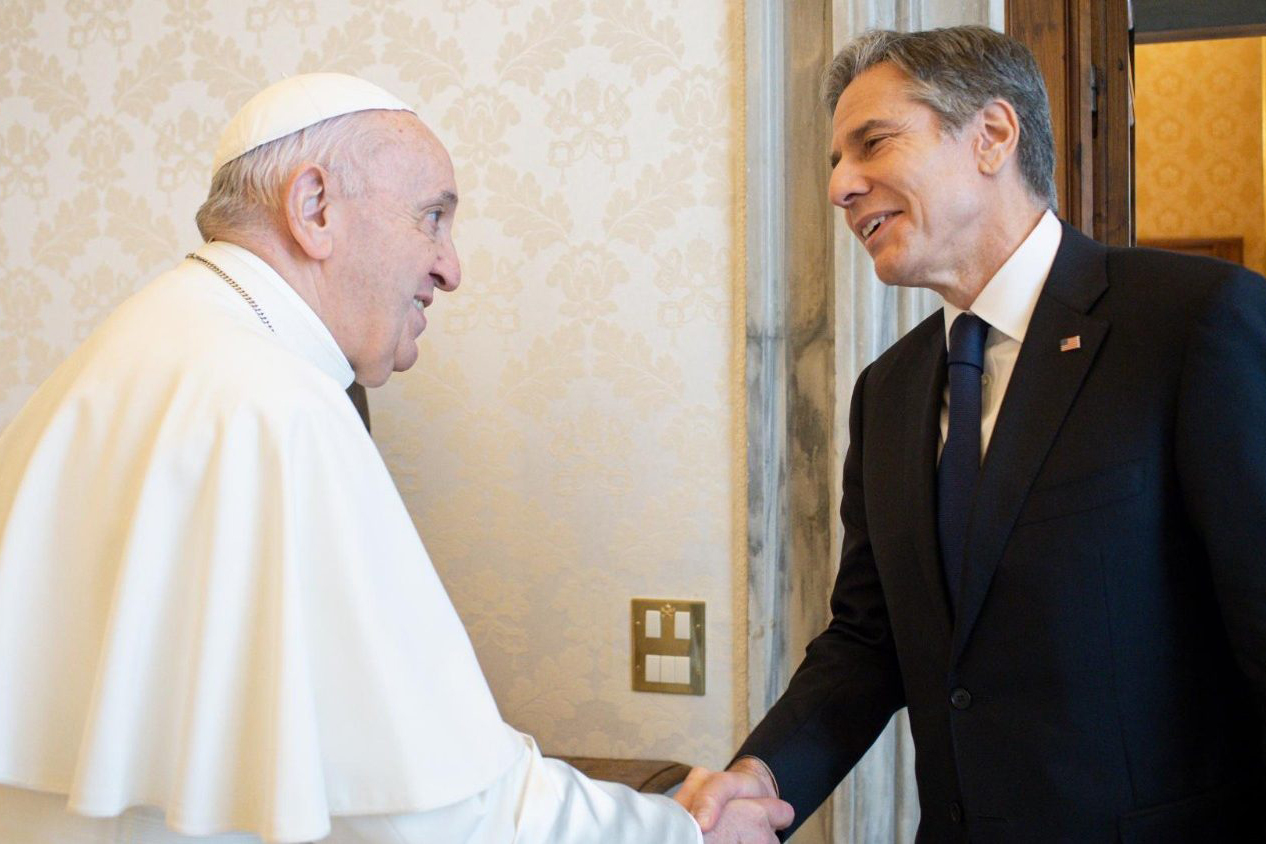 VATICAN— Pope Francis received U.S. Secretary of State Antony Blinken for a private audience in the papal library of the Vatican’s Apostolic Palace on Monday morning.

The Vatican did not release much detail about what was discussed during the 40-minute meeting on June 28, other than that the pope recalled his 2015 visit to the United States and expressed “his affection and attention to the people of the United States of America.”

It was the first visit of a Biden administration official to the Vatican since the U.S. bishops voted to draft a teaching document on the Eucharist.

Ahead of the papal meeting, Philip Reeker, the Assistant Secretary of State for Europe, told journalists that the U.S. government was seeking to work together with the Holy See to promote human rights and “to raise countries’ collective ambition and to address the climate crisis by raising and implementing national emissions reduction targets.”

He noted that the Holy See maintains an extensive formal diplomatic network and diplomatic relations with 183 countries. “So, along with the United States, one of the largest diplomatic networks, and they have a grassroots presence in almost every country in the world,” the U.S. official said.

“The United States and the Holy See enjoy a very close partnership, particularly in areas like promoting human rights, combating human trafficking; climate change is an important one to underscore. And together we seek peaceful solutions to a number of crises around the world,” he said.

Blinken’s morning visit to Vatican City included a meeting with Vatican Secretary of State Cardinal Pietro Parolin and Archbishop Paul Gallagher, the Vatican Secretary for Relations with States, as well as a tour of the Sistine Chapel.

“The spiritual atmosphere, the divine art, and the impressive architecture left me speechless. Truly stunning,” Bliken wrote in a Twitter post following the meeting.

During his remaining time in Rome, Bliken will co-chair a meeting of the International Coalition against the Islamic State with Italian Foreign Minister Luigi Di Maio, and is expected to discuss the Syrian civil war in meetings with Italian President Sergio Mattarella and Prime Minister Mario Draghi.

The U.S. Office of the Special Envoy to Defeat ISIS, Patrick Worman, said that the coalition’s work in the fight against the Islamic States has “continued steadily” since the terrorist group’s territorial defeat in 2019.

“ISIS remains a determined enemy. There is still much work to do in Iraq and Syria, where ISIS continues to conduct attacks and sow fear among local populations,” Worman told journalists on June 25.

“We continue to strengthen our efforts to counter ISIS’s global network of branches and affiliates, as well as its twisted ideology and capability to plan terrorist attacks.”

He added that the coalition will discuss the threat ISIS poses in Africa. Christians have been targeted by ISIS-affiliated groups in Africa in recent years.

On Sunday, June 27 a bomb was detonated in a Catholic church in the Democratic Republic of Congo’s (DRC) in Beni, which has faced attacks from the Allied Democratic Forces (ADF), an ISIS affiliated rebel group from neighboring Uganda.

The day before his audience with the pope, Blinken met with Yair Lapid, the Israeli alternate prime minister and foreign minister in Rome after which Blinken told journalists there is an urgent need for humanitarian assistance to Gaza.

It was the first face-to-face meeting with the Israeli foreign minister since Prime Minister Naftali Bennett was sworn in two weeks ago.

Blinken also met with the heads of the United Nations’ food security agencies based in Rome, including the UN World Food Program (WFP).

The Secretary of State’s trip to Europe June 22-29 has included stops in France, Italy, and Germany.

In France, Blinken discussed the serious human rights violations against the Uyghur minority in Xinjiang, China — something the Vatican Secretariat of State has yet to publicly comment on.

China was a major focus of last October’s visit to the Vatican by the previous U.S. Secretary of State, Mike Pompeo.

“There are two important aspects when we witness human rights violations, including such serious violations as seen in Xinjiang. We need to at least speak out; not only speak out but taking action with the available means,” Blinken said on June 25.

“But with the current situation, which is ongoing right now in Xinjiang against the Uyghurs, we should at least as an international community to shed a light on what is happening, to clearly speak out and say this is not acceptable, and through sanctions, to try at least to pressure those who are leading such policy, change their policy,” he said. 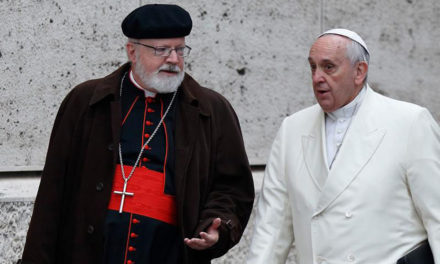 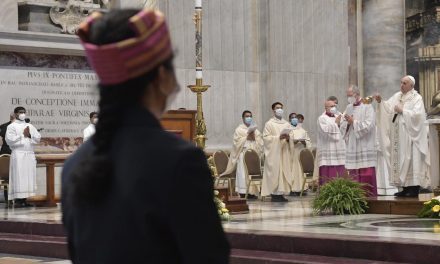 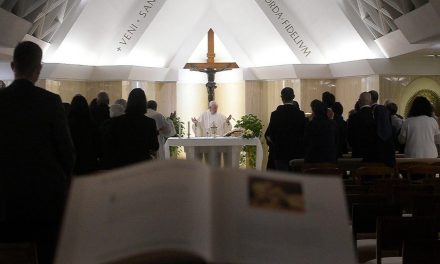